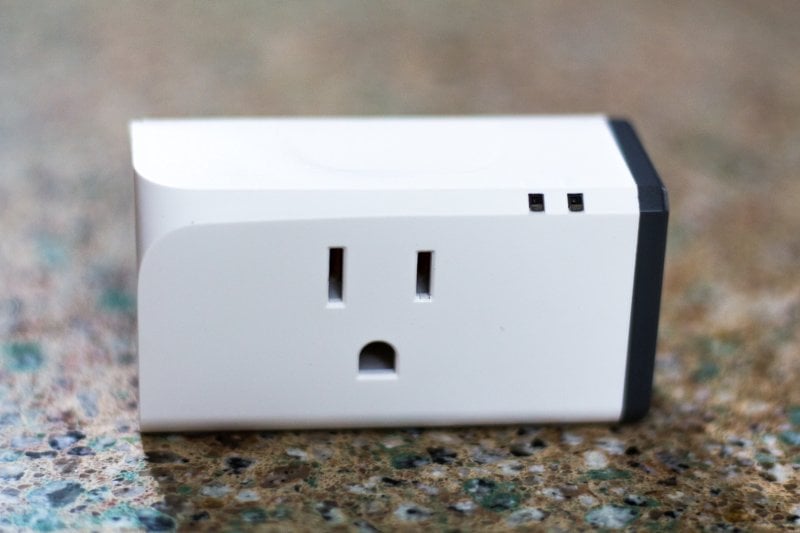 I’ve been a big fan of the Sonoff lines of products, starting with the Sonoff and Slampher back in 2015 and then again last year with the Sonoff TH and POW products. I’ve liked them primarily for two reasons: they’ve been based on the ESP8266 and because they are comparatively inexpensive. I’ve tried other products, namely the Belkin WeMo, and I’ve found that the Sonoff products compare favorably in nearly every category. I was really excited when the Sonoff S31 became available—it was by far their most appealing product to date.

With the prior Sonoff products, there was a tiny little bit of assembly required. Not too much, mind you. But you did have to hack into the power cords of your devices, or in my case, I’d cut up little power-extension cables and wire them up. I must admit that hacking these power cords up and integrating the Sonoff products actually wound up being a bit of a selling point for me. It was a bit fun to have to do the wiring, but I could see how that might scare off consumers that are not as eager to play with electricity.

Nothing bad ever happened with my Sonoff products, mind you. The worst thing that happened was that I put a couple together poorly and had to deal with some devices losing power after one of the wires worked loose. Electrocuting myself was never an immediate concern, but I’d be lying if I said it didn’t cross my mind from time to time. However, it made me wonder what might happen if my friends at ITEAD were to try and build a product a bit more finished, like the Belkin WeMo. What would that be like? How would it compete against the other devices like the WeMo?

The Sonoff S31 (specs) appears to be ITEAD’s foray into a more consumer-friendly product. Its most exciting feature is obvious to the naked eye: it has been designed into its own enclosure. The enclosure is small enough that you can comfortably fit two Sonoff S31s into a typical outlet here in North America. What I’d had to do with my previous Sonoff TH and Sonoff POW was to screw them into the wall nearby, which wasn’t always the nicest-looking solution. Even though I had enjoyed hacking into electrical cables and wiring up to the prior generations of Sonoff products, it occasionally worried me that things might come loose. Being able to eliminate the potential of my own shoddy work immediately piqued my interest when I learned of the Sonoff S31’s existence, and at around $18.00, I was really excited with how it was more affordable from the comparable units from other manufacturers.

I borrowed Pat’s Kill a Watt so frequently that it was every bit as likely to be found at my house as it was his! After borrowing the Kill a Watt for the umpteenth time, I went ahead and bought my own. Over the years, I’ve used it in a number of different ways—just about anything I’ve ever expected to use more than its fair share of electricity has found itself plugged into my Kill a Watt. My curiosity about devices’ power consumption was what had me the most excited about reviewing the Sonoff POW last year.

The Sonoff S31 took the advances of the Sonoff POW a step further. Within the app, in addition to displaying the wattage being drawn by the Sonoff S31, the app also displayed the current and the source voltage. Digging into the details of the device in the EWelink app gives you the ability to measure power consumption over time and set up a number of alarms (realtime power minimum/maximum threshold, current threshold, and voltage threshold).

The ability to monitor and report on the power consumed by the device(s) plugged into the Sonoff S31 is a huge selling point to me. I’ve had my Kill a Watt for quite some time, but its price is pretty much exactly what I paid for it a few years ago. The fact that I can get a Sonoff S31 for pretty much the same exact price would make it really easy for me to suggest that people who are interested in measuring the power consumed by their devices check out the Sonoff S31 over the Kill a Watt. Being able to monitor the Sonoff S31 on a mobile phone from anywhere with Internet access makes it a better alternative to the Kill a Watt. 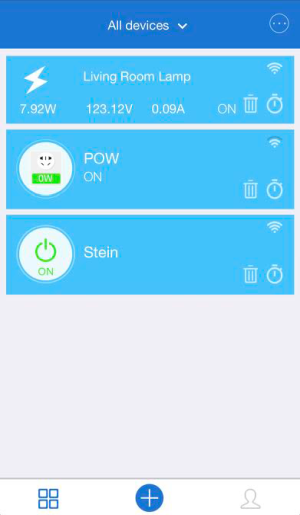 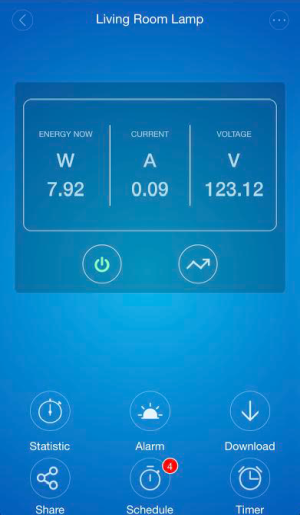 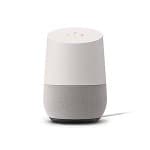 The best part of the maturation of ITEAD’s Sonoff products is the integration of services like IFTTT, and products like Amazon Echo and Google Home. The past couple months I’ve been playing with one of the Raspberry Pi-driven Google AIY Kits at home. Apparently, I have been engrossed enough with the Google AIY Kit, that my wife bought me a Google Home as an anniversary present. And just a few weeks prior, Santa had brought an Amazon Echo Spot for my wife this year. The fact that the Sonoff S31 was being advertised as compatible with both the Google Home and Amazon Echo products was a tremendously interesting feature for our whole household.

That being said, I probably wouldn’t define being able to ask Google (or Alexa) to turn my lights on for me as home automation. You’re simply using your voice to replicate what you used your hands to do previously, turn something on and off. In the end, you’re still the one manually turning the lights on or off. If you have a stricter definition of home automation and you’re looking for a much more truly automatic solution, look no further than openHAB, which boasts modules for the Sonoff products. I haven’t had the time yet to dedicate to it, but one of the things I want to run on my homelab machine is an openHAB virtual machine and to create a set of rules to determine whether or not I’m home using a set of conditions like:

Using those conditions and openHAB will allow for some actual home automation. But all of that’s a topic for another day! I look forward to seeing how my Sonoff S31 and other Sonoff products end up working into those plans!

I used a Sonoff S31 to control my face!

I wanted to experiment with the different ways I could work with the Sonoff S31, both semi-automated and automated. Especially since my darling wife bought me a Google Home for Valentine’s Day. Here’s a couple quick and tasks that I built around using the Sonoff S31’s capabilities.

My son, Gunnar, is nearly two years old and is absolutely the current center of our universe. A couple times while commuting home from my day job, I’ve been apprised that Gunnar’s been screaming “Where’s Daddy?!” at my exasperated wife. Back when I was building my keezer, I purchased a silly custom edge-lit LED sign with my face on it. Since buying it, it has dutifully sat on top of a built-in bookcase and perpetually lit up.

I was looking at it just the other day and thought that it’d be neat if I used [IFTTT][ifttt], my mobile phone, a Sonoff S31, and my sign to indicate whether I was close to home or not. Using the GPS on my phone along with its Internet access, I could turn the sign on as I got within a few miles of the house. Or using the EWelink app, maybe my wife could placate Gunnar for an extra few minutes by turning the sign on from her own phone.

As a Valentine’s Day gift this year, my wife bought me a Google Home smart speaker. I’ve barely had a chance to tinker with it, essentially using it as a fancy kitchen timer for the making of my morning upside-down method AeroPress cofee, playing some music, and telling me whether or not the weather’s going to let me fly my quadcopter this week. Considering the timing of this blog, it only seemed to make sense to try and see how complicated integrating the Sonoff S31 to Google Home’s functionality was.

And you know what I found out? It’s not hard at all! Not only was I able to integrate ITEAD’s latest in the Sonoff S31, but every Sonoff device in my account was pulled in by Google Home and worked right off the bat. Even the protoype of the first Sonoff product that I was given to review nearly three years ago immediately started working with the Google Home. To be completely honest, I was astonished at how easy it was to get my Sonoff devices working with the Google Home.

How does the Sonoff S31 Compare?

I’ve tinkered with quite a few “smart outlets” like the Sonoff, and in the past I’ve preferred the Sonoff’s inexpensive price despite the Sonoff requiring the splicing of electrical cords as part of its installation. A little bit of work on my part was always worth the fact that the Sonoff products were a fraction of the price of similar products. In the Sonoff S31, ITEAD has built something to compete directly with the likes of the WeMo Mini Smart Plug and tp-link Smart WiFi Plug Mini. However, in the case of the Sonoff S31, it is both considerably cheaper than the other products and it includes power-monitoring features that the other two completely lack.

I’m pretty excited about the Sonoff S31. It is absolutely everything that I could ask for in a “smart” outlet. It has a small footprint, it has power-monitoring features, it integrates into both the Google Home and Amazon Echo products, it’s bit hackable, and—best of all—it’s inexpensive! In my opinion, the folks at ITEAD have really hit a home run with this product. ITEAD originally offered to send me one free Sonoff S31 to review, but when I saw its cost and features, I went ahead and bought 4 of my own. Now that I’ve had the chance to use the Sonoff S31, I’m pretty eager to buy additional ones and begin automating or monitoring more of the things plugged into my home’s outlets! As a bonus to my blog’s readers, ITEAD has issued a coupon code. Enter S6CUSNS9 for 10% off either a 1 or 2 pack of the S31 when buying them from Amazon (Link:Sonoff S31 on Amazon)!