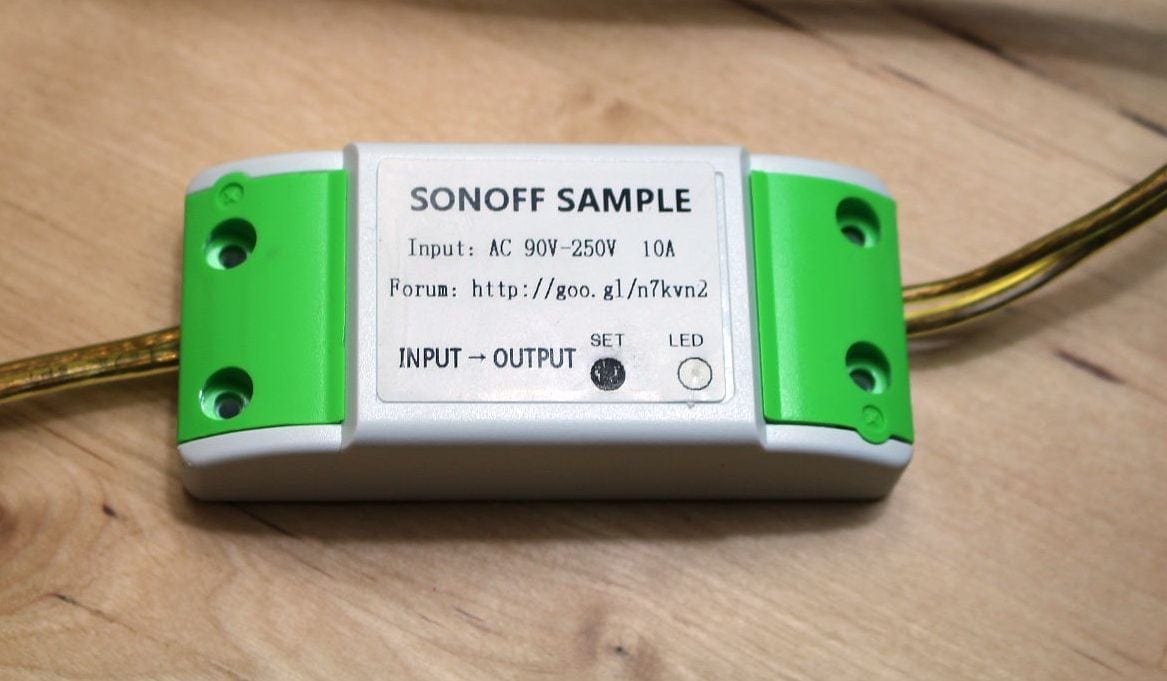 My own recent foray into home automation went well earlier this year — I wound up automating the lamp closest to my desk, which has worked brilliantly so far. My only complaint with that solution so far has been that the WeMo Switch from Belkin is a bit on the expensive side. I couldn’t really justify the expense of buying a WeMo switch for every outlet that I wanted to automate in the house. My good friend, Pat, wound up doing some more complicated home automation of his own that really encouraged me. Pat used some inexpensive remotely controlled electrical outlets and an ESP8266 to begin automating some tasks around his house. I’d be lying if I said I wasn’t a little jealous.

Well, as it turns out my little home-automation blog caught the eyes of some people at ITead Studio, which was fortuitous since they had just launched a crowd-funding effort on Indiegogo that was right up my alley: Sonoff & Slampher: Low Cost Smart Home Solution

The folks at Itead Studio were wondering if I’d be willing to write a blog about their Sonoff and Slampher products if they sent me a sneak-peek sample of the product. For me, the answer was easy; “Yes, have some!”

I was excited about the Sonoff and Slampher because they were effectively providing product(s) that were competitive with the WeMo Switch but at a phenomenally better price. Pat and I both had discussed that it was within our ability to build inexpensive remotely controlled WiFi relays (essentially the Sonoff) on our own which were much cheaper than their commercial alternatives. But in this case, it’s a commercial-quality product which beat our own pricing. 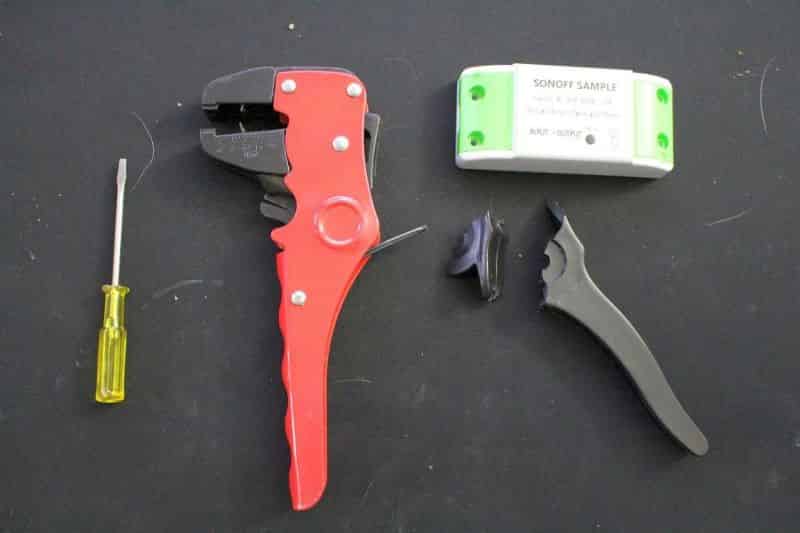 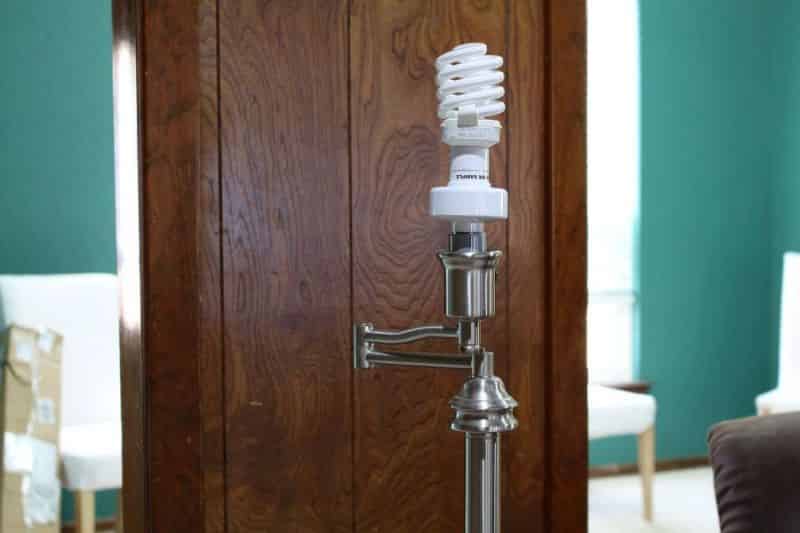 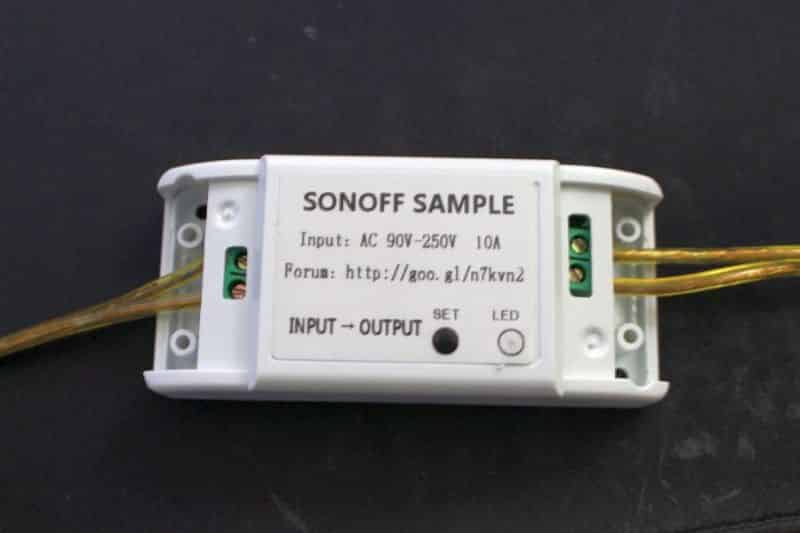 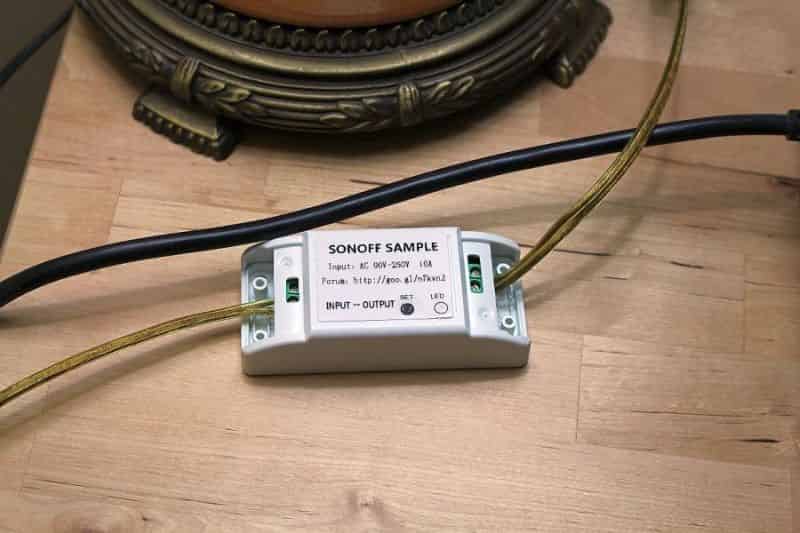 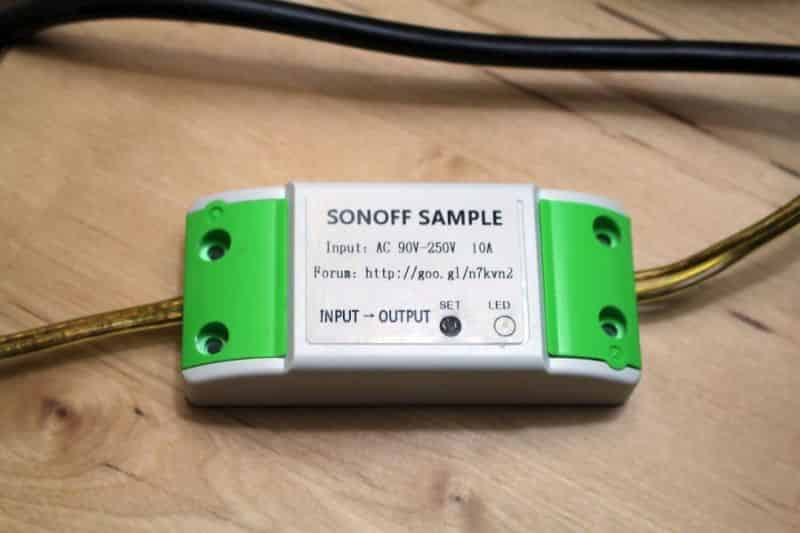 Almost thirty years ago, a teenage friend amazed me when he added a switch (like this one) to a lamp so that we could turn it on/off more easily from the floor while playing video games in front of his television. I’m hoping that one day he gets to sit down with his children and amaze them too, but instead this time he’ll be able to turn it off from anywhere on the Internet using his phone or tablet. As a remote switch, the Sonoff could be used to turn off/on anything that runs off of electricity.

For the sake of demonstrating its capabilities, I used my favorite lamp and something that I’ve wanted to home automate for a long time: my grandfather’s beer stein lamp. To me, it was a priceless heirloom that I remember fondly from hours of playing down in his basement where it sat on an end table. A cousin brought him the beer stein as a gift back from Germany, and due to its size it eventually was brilliantly converted into a lamp — that lamp is now a focal point in my home office.

One of my favorite things about the Sonoff is that it’s relatively slim and it could be located anywhere. However, that comes at a price. It’s essentially hacking a switch into the device’s power cord, which is both potentially dangerous and would likely void any warranty you have on that item. That being said, I can think of a number of things I’d like to use the Sonoff with:

On its face, I think the Slampher is a sexier product than the Sonoff for a couple of reasons. Firstly, it takes some gumption to use the Sonoff—you have to be willing to cut apart an electrical cord and wire it up correctly into both ends of the Sonoff. Secondly, most of my lighting is accomplished via built-in fixtures which don’t have readily accessible power cords for hacking into. In fact, it may not even be allowed in your city’s electrical code to use a switch like that with the Sonoff.

The Slampher fits right into a regular light socket and a bulb fits right inside it. About the only drawback of the Slampher is that it adds to the total height of the bulb and some width at the base. In my video, I had to completely remove the lampshade and its support structure in order to fit both the Slampher and the bulb in there.

Conclusion and What’s Next

Overall, I’m very impressed with the Sonoff and Samphler. My only points of constructive criticism is that it’s obvious that this product isn’t actively being designed for consumers in the United States. Some of the language in the documentation and within the app is a bit off and can make the product a bit more difficult to use. However, this is something I would expect the ITead Studio team to be improving on as their crowdfunding efforts near completion. More importantly, the price that they’re crowd funding at is low enough that I’m quite willing to fight through any unintentional communication issues.

What’s next for Brian using the Sonoff & Slampher? Is the best question that anyone could ask me about these products. For starters, I’m getting involved with their Indiegogo campaign and pledging enough money to buy myself a handful of both the Sonoff and the Slampher devices. Repeating some of Pat’s lessons working with his remotely controlled outlets, I fully expect to be able to reverse engineer the WiFi or RF signals being transmitted to the devices and incorporating it into my own home-automation schemes.

What about you? What would you use the Sonoff & Slampher: Low Cost Smart Home Solution for at your home? Use the comments below to share your brainstorms!