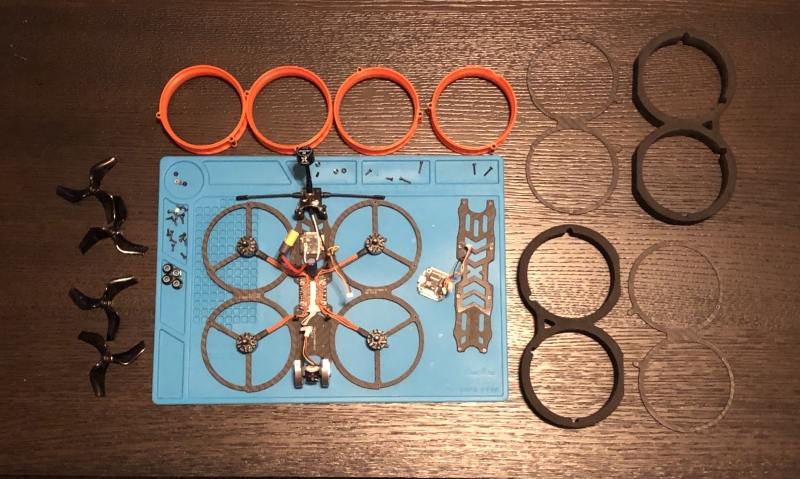 Warning: I’m more than a little agitated with how the purchase of the Diatone MXC Taycan has worked out for me. I generally try and be objective in these kinds of situations, but in this particular case I figured I’d share my unfiltered experience in the hope that it helps other(s) avoid what I have found myself running up against.

Thanks in large part to videos like this one from Paul Nurkkala aka NurkFPV, The National Museum of the U.S. Airforce… FROM THE AIR!, I’ve been very interested in cinematic videos that other much more talented quadcopter pilots than I have been routinely sharing.

When Pat was able to capture this awesome video of me on my Exway X1 eSkateboard using his own cinewhoop build around his Kestrel quadcopter frame, I was pretty much convinced that I wanted a something similar to shoot my own cinewhoop-style footage with.

In working with smaller quadcopters (3” propellers and smaller) previously, I learned that I didn’t particularly enjoy assembling or repairing smallish quadcopters. Shrinking everything down increased the degree of difficulty in building and maintaining the quadcopters. I didn’t want to re-learn lessons from the past, and was hoping a reasonably-priced, already assembled cinewhoop quadcopter was out there waiting for me.

At nearly the exact same time, I saw two of my other favorite sources of quadcopter information, KababFPV and Joshua Bardwell, both reviewed a new quadcopter, the Diatone MXC Taycan. It is a cinewhoop-style quadcopter built around many of the same components that Pat was using in his Kestrel build, and both Joshua and Kabab had nice things to say about it. I anxiously checked all of my favorite quadcopter sites and was disappointed to see it listed everywhere as Coming Soon!

I placed my order on January 15th and thanks to the complications of the celebration of the Chinese New Year and the emergence of COVID-19, it took nearly 6 weeks for it to get delivered to me. 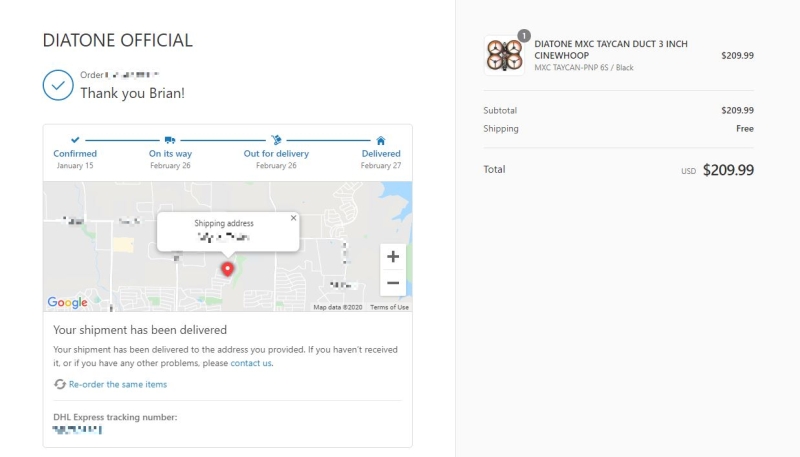 I certainly don’t fault Diatone for my order being negatively impacted by the Chinese New Year or by the onslaught of COVID-19. But the six-week wait was definitely an ominous sign.

When it finally showed up on February 27th, I excitedly got to work. We added one of my receivers to it, set up my switches, tested the inputs, and then took it to the park the first chance the weather and my schedule allowed it.

Unfortunately, my Taycan was defective

My first test flight failed. From inside my goggles, I couldn’t quite tell what had happened. But I was giving it lots of throttle, but it wasn’t lifting up off the ground—not even a little bit. I walked over to the drone and tried to fly it line-of-sight and it was painfully obvious to see what was defective—one of the motors wasn’t spinning up at all!

I removed the propellers and did some field diagnostics and wasn’t seeing any response from the malfunctioning motor when the quadcopter was booting up, or when I tried to give it any kind of throttle. This seemed to suggest that the motor wasn’t receiving any signal from the flight controller via its electronic speed controller (ESC).

I remarked at everyone flying with us, “This is the exact kind of trouble I hoped to avoid by buying a pre-built quadcopter.” I explained about how I was expecting to be able and go home, reach out to Diatone’s support, get a replacement Taycan shipped to me, and get back up in the air without having to disassemble and reassemble everything. I reached out to Diatone’s support and the next morning I was pleasantly surprised to find that I had a response waiting for me in my inbox.

I had expected to hear details about how Diatone’s RMA process works. Specifically, I was hoping to hear that they did advance RMAs provided I had a credit card on file as a deposit to make sure the defective goods were promptly returned.

Rather than offer an exchange, what was actually waiting for me in my inbox was a set of briefly and poorly worded instructions to repeat steps that I’d already said I’d attempted; to disconnect and reconnect both ends of the cable that connected the ESC to the flight controller.

Caught off guard, I decided to just go ahead and repeat the steps that they asked. As expected, disconnecting and reconnecting the cable one more time did not solve the problem. However, their email did note that there should be a spare cable included with the quadcopter. Replacing the cable wasn’t that much work. And wouldn’t you know it—after replacing the cable, I successfully tested all four of the motors. I even managed to get one good battery in chasing Pat while riding his electric unicycle the following weekend!

But then we got disrupted with wet weather and the onslaught of Coronavirus keeping us mostly indoors. This past week, Pat and I snuck out of our COVID-19 shelter-in-place suggestions and went exploring for a place to do some cinematic flying at. The fact that so many popular places were mostly deserted seemed like an excellent opportunity to shoot some cinematic footage.

Except now my Taycan wouldn’t even boot up!

We stopped at the library at Collin College’s Spring Creek campus, which is not too far from Pat’s house. While Pat did some orbits of an Earthly statue in a very Kerbal Space Program-esque fashion, I muttered and cursed while my Taycan wouldn’t boot up at all!

Here's my little snippet from the one battery I flew with an HD camera while flying and riding with @briancmoses yesterday. Flying my 4" really does feel like I'm wearing someone else's shoes. pic.twitter.com/OPyD6v7kIH

So what came next? 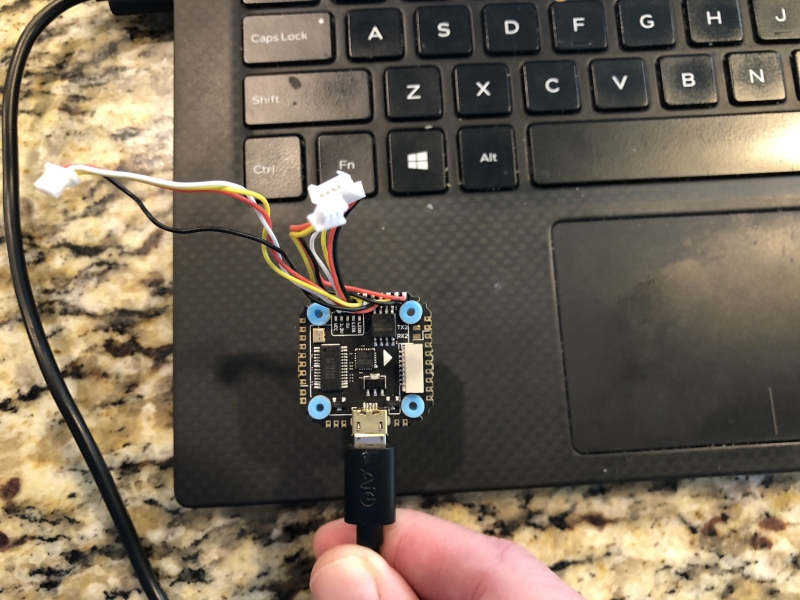 What followed was a new email off to Diatone’s support team and a back-and-forth that I can only begin to describe as the beginnings of a wild goose chase. With each reply, I was asked to do even more work and more troubleshooting to prove to them that what they shipped me was defective, including one email where whomever I was corresponding with from Diatone more or less implied that what was causing the issue was that I’d incorrectly flashed the wrong version of the firmware to the flight controller, which I hadn’t done. And even if I had done it, I’m savvy enough to get the flight controller into DFU mode to re-flash it and comfortable enough with my own boneheadedness to admit what I’d done in asking for their assistance.

With each of this past week’s replies, I’ve asked them to provide me a shipping label so that I could either have this defective quadcopter replaced or just straight up refunded. Each time that request has been met with discouragement and further troubleshooting steps.

I’m done with Diatone’s support for the Taycan

In my last email, I told them I was done troubleshooting their defective quadcopter and that I wouldn’t be helping them anymore. They’ve discouraged me enough that I just don’t care. I’ve spent quite a few hours working on their quadcopter and replying to their emails with the results of the work that I’ve done. But that effort hasn’t even inched me towards the hint of a solution.

I’ve more than demonstrated to them that there’s a hardware defect, but for some reason they just seem to want to keep giving me more and more steps to work through.

For some reason, Diatone is unwilling to admit or do anything about the defective quadcopter that they sent me. I suspect that they might eventually send me a new flight controller and wish me luck in repairing their defective quadcopter on their behalf, but that’s just not going to cut it—I had higher expectations.

I purchased the quadcopter two and a half months ago and I’ve only managed to have one decent outing with it. It’s time to cut my losses!

How is Brian going to Cinewhoop, then?

This is a good question! I was half-tempted to just buy an entirely different cinewhoop-style quadcopter like the iFlight BumbleBee or perhaps to follow Nurk’s custom build of the Shendrone Squirt. But ultimately I wound up deciding that I didn’t want to straight up throw away the $210 that I had already spent on the Taycan. I figured I might as well scavenge what I could from my defective Taycan and see if I could build something better. 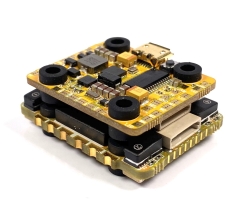 I opted instead to replace the likely defective flight controller and suspect ESC that came with my Taycan. I literally just got done placing an order for the NewBeeDrone Infinity200 Stack (ESC+FC).

I didn’t even bother to listen to what Diatone attempts to do to reconcile the fact they sent me a defective quadcopter. In the best-case scenario, they send me a replacement flight controller and ESC that I can add to my stockpile of spare parts or give to a friend who might need it.

I really thought that I’d be more likely to have a defective quadcopter if I assembled it. I also assumed that I’d receive better support if I bought ready-made and that the entire thing would get replaced. Unfortunately for me, both of those assumptions wound up being wrong.

I would’ve been way better off by just picking out my own components for a cinewhoop-style quadcopter. I’m going to wind up losing money both in the hardware that I opted to replace myself but also in the amount of time that I’ve spent diagnosing and ultimately repairing Diatone’s defective product.

Unfortunately, in the realm of pre-built quadcopters, there’s still definitely the need to keep caveat emptor in mind.

If you happen to be shopping for a pre-built quadcopter because you want to avoid the hassle of assembling the quadcopter or troubleshooting any potential defects, then please use my experience as a cautionary tale!