When I pick a new hobby, I go “whole hog,” and quadcopters has been no different. In fact, I’ve been more active with quadcopters than I am able to keep up with in writing blogs. I build, break, upgrade, and retire drones at such a rate that it has often exceeded my capacity to write about. As a result, I’ve been accumulating drone-related stuff that may not be all that useful to me anymore, but it’s still quite useful.

Have you been interested in quadcopters, but not knowing the best way to begin? I think that a deeply discounted, somewhat-used quadcopter is a great place to get started!

So here’s the deal…

I’m looking for an easy way to free up my drone storage and maybe buy a few spare parts for my favorite quadcopters with the proceeds. Let me start off by saying “Caveat Emptor!” Everything I’m listing here is going to be sold “as-is” without any kind of warranty or promises. The prices include me paying for shipping within the United States; if you’re outside the US then I’m very sorry but I won’t be able to sell to you. When it comes to people who may live in the same massive metroplex that I do, I’d really prefer if you just let me ship it, but maybe I can be talked into meeting up somewhere to deliver things.

Without further ado, here are the things I’m selling or have sold:

With my first quadcopter, I was convinced that I’d be way more interested in aerial photography than flying FPV drones. So much so, that I raced out an preordered the DJI Spark Fly More combo when it was announced. I figured it’d be a good foray into drone photography and let me know if it was a good fit. Sadly, aerial photography just wasn’t all that interesting to me. As a result, my DJI Spark follows me out to the park every time I go flying but never manages to get up in the air. Rather than letting it gather dust any longer, I figured I’d put it up for sale!

I love the KingKong 90GT; I’d never be where I am today without it. It’s the quadcopter that I learned how to fly FPV with. It was a fun little quadcopter that I could fly around easily enough outside, but it was inexpensive enough that I was emboldened to take the risks that allowed me to steadily make improvements until I was every bit as willing to take the same risks with bigger quadcopters.

The 90GT ultimately wound up getting pushed out of my bag by the fact that I simply had too many other quadcopters which I enjoyed. About my only complaint about the 90GT was that it was too powerful for inside the house, but not quite powerful enough to substitute in for my other bigger quadcopters.

In this auction, there’s literally one ready-to-fly quadcopter with a FrSky receiver, an entire assembled replacement, and a whole bevy of replacement parts—including spare flight controllers and video transmitters. 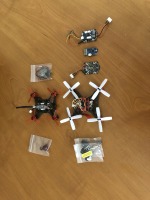 In my opinion, this is by far the best quadcopter I’m selling—but depending on your point of view it may also be the worst. I wanted to build a premium, mini quadcopter capable of keeping up with my bigger quadcopters and recording HD footage. It started out a bit more modest, as Brian’s Pseudo Mini Quadcopter. Since building it, I’ve upgraded the motors to the T-Motor F20 II, I’ve upgraded the frame to the HyperLite Tooth Fairy 3” frame, and I tried to upgrade the flight controller/ESC to a new stack with a built-in VTX in the ARTOWER Mini ARF4-SVTX F4 flight controller.

However, what I found was that I don’t like building tiny quadcopters. There’s too much going on in not enough room, so it wound up being something that I didn’t like doing. This was further complicated by the fact that any time I did a roll, it’d roll out of control until it crashed. I’ve seen similar problems that wound up being a bad ESC, but rather than subject myself to fixing it, I just ordered something prebuilt.

Please note that in the terrible picture of the flight controller, you see the wires of the receiver. The receiver is not part of this auction as I’ll be using it on a different quadcopter. Currently, Pseudo is in a bunch of pieces. But if you’re willing to tinker and put it back together, you can get a premium 3-inch quadcopter for a fraction of the price! 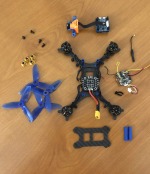 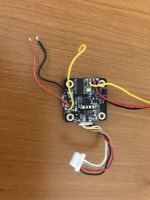 At one point, I was looking to compliment my quadcopters with a decent “backup” quadcopter for when I wrecked one of my favorites. And then a funny thing happened, I mostly stopped wrecking my favorite quadcopters. And we also got better and more efficient at fixing our quadcopters. I only flew this FuriBee X215 Pro a handful of times. It flew well enough, but I wasn’t super impressed with it and very quickly it wound up gathering dust in a box. It’s been a few months, but it flew just fine the last time I took it up. My X215 includes a FrSky receiver. Check out UAVFutures’ review of the X215 Pro which convinced me to buy it in the first place.

I really, really liked the STRIX 4S Parallel Charging Board, but ultimately I wound up building quadcopters around 6S batteries and it got a bit constraining to be so limited to the kind of batteries that I could charge. I wound up switching over to a different balance charging board, but figured someone out there might appreciate their own STRIX 4S Parallel Charging Board 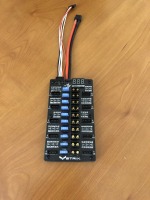 Among the things I’ve always wished was that it’d be easier for us to share a display with a random stranger who comes up to us in the park and wants to learn a little bit about our first-person-view quadcopter shenanigans. I had thought that this Lumenier DX800 DVR w/ 5.8GHz 32CH Receiver would make it easy to hand off a working display to that spectator so that they could see what’s going on. However, given that we fly primarily during the day, it wound up being really difficult for folks to see with or without the included sunshade (which I’ve misplaced). Pretty quickly, I figured out that this wasn’t going to be a solution for me, but it might work better for you! 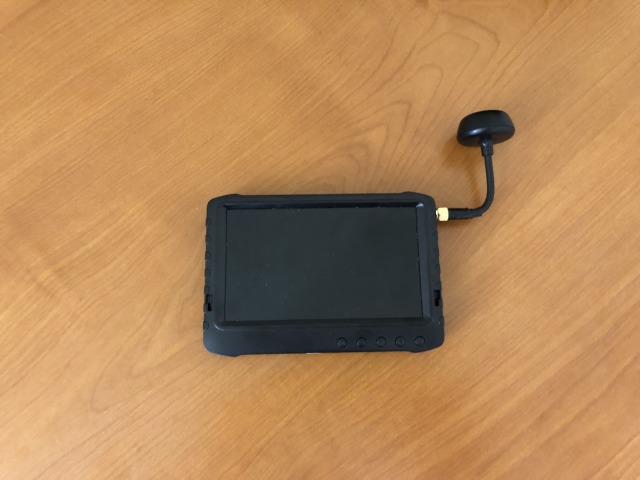 The SKYRC IMAX B6AC v2 wound up being my very first LiPo battery charger; it had come highly recommended to me by a friend with expertise. And it served me very well for quite a long time. I charged single batteries, I charged batteries in parallel (with the charging board above!), but I wound up coming across a different battery charger that I wound up liking better because I could combine it and a really big battery and do some field charging. My new charger quickly replaced the B6AC for all my charging duties.

At the rate that I’m buying, breaking, and upgrading quadcopters, I think this will turn into a regular thing. I’m hoping that as I do bigger and badder things with my drones, that someone curious can come in and buy what I’ve outgrown to get into the hobby on their own.