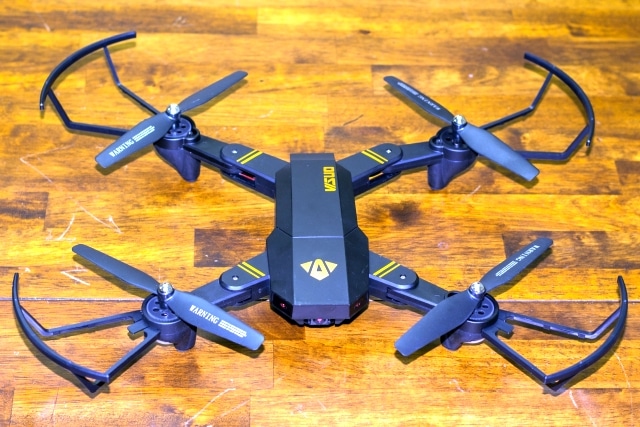 If you were interested in drones and followed my advice, you’d wind up buying a King Kong 90GT quadcopter, a Taranis X9D Plus transmitter/controller, and an inexpensive set of FPV goggles. This setup would have you well-suited for flying your first quadcopter and then have you in the position of buying and flying bigger and faster quadcopters in the immediate future. Sounds great, doesn’t it?

At today’s prices, the gear above would wind up running you nearly $300. We may need to tap the brakes a little bit here! That’s quite a lot of money to spend on a brand-new hobby—especially a hobby that winds up taking practice, determination, and some skill. I don’t know about you, but I’d have to be pretty excited about a new hobby to be willing to invest so much money up front. Especially when I’ve learned that as a newbie pilot, you continue to invest time and money into your quadcopters, replacing parts after crashes.

Thankfully for me, taking the plunge and spending hundreds of dollars to get started building my own 450mm quadcopter worked out really well. I’ve enjoyed myself quite a bit and I’ve amassed quite the collection of quadcopters in little to no time.

But what if you’re on the fence, not wanting to invest hundreds of dollars, lacking experience with remote-control vehicles, and without the access to experts that I had? A different, more budget-friendly alternative is a good idea. An ideal solution for that person might be an introductory-type drone that’s inexpensive enough that if you spent a couple hours on it and decided that quadcopters aren’t for you, it wouldn’t fill you with regret when you completely walked away from the hobby. 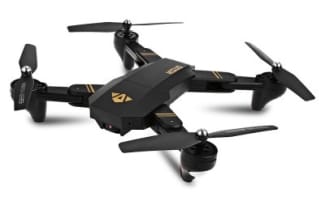 The Tianqu XS809W is a budget-friendly, camera-equipped, WiFi-enabled, foldable quadcopter. Its best feature is its all-in price of around $50. For that low price, you get a beginner-friendly quadcopter that includes everything that you need to start flying and even taking some pictures. For its size and wingspan, it’s quite compact when folded up, and it’s also incredibly lightweight. The styling of the quadcopter, especially the foldable arms, is a direct clone of the DJI Mavic Pro—but that’s in looks only. The Tianqu XS809W’s price tag is a mere 5% of the DJI Mavic’s—but it’s not like they’re playing the same ball game.

One day this past week, Pat and I met up to fly drones in one of our favorite nearby parks. I charged up the Tianqu XS809W’s battery and put 3 AA batteries into the transmitter and was flying in a matter of seconds! The only difficulty that I wound up having was on actually due to my phone. The drone uses WiFi to communicate with your phone, so your first step is to connect your phone to the drone’s WiFi access point. But because of that, my phone was complaining about the fact the drone’s WiFi lacks an internet connection. The problem wound up being that my phone was refusing to actually connect to the drone’s access point. That particular problem was resolved when I selected the option to remain connected anyways when prompted by my phone.

I snapped my Pixel XL into the transmitter’s spring-loaded holder, used my phone as a display for the Tianqu XS809W, and I was up in the air without great difficulty. I flew it near, I flew it far, I flipped it, I took some pictures, I recorded some video, I crashed it, and repeated through all these things until I drained its battery. Here are my impressions: 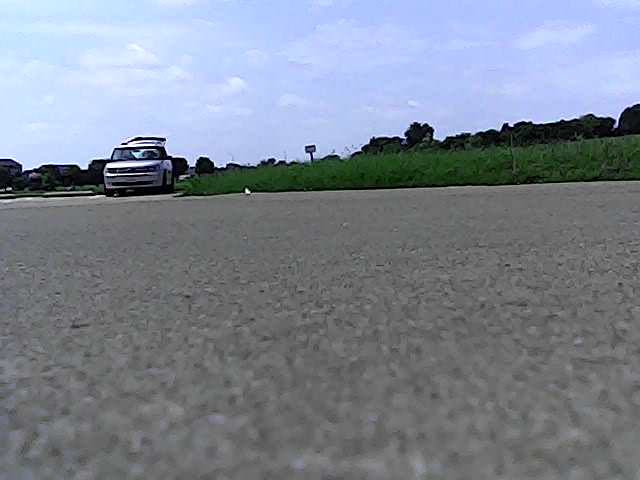 My biggest two complaints about quadcopters have been that it’s an expensive hobby in terms of both monetary and time investments. Getting to where I’ve gotten has required a lot of cash and a lot of time. While I think it’s been a worthwhile investment of both, others might not agree with me. I’ve been hesitant to encourage some of my friends to get into the hobby because I don’t want them spending hundreds of dollars and dozens of hours getting into a hobby that they might not wind up liking. I think the Tianqu XS809W is a potential solution to this problem.

If you keep the cost (regular price of $50, and $39.99 using the coupon below!) in mind, I think the Tianqu XS809W is an excellent value, especially in the hands of someone who is curious about getting into quadcopters. The XS809W has enough of the features of more expensive drones to give someone an idea of whether they’re going to like the hobby or not. The quality of those features is definitely not comparable to more expensive drones, but at its price point, that quality probably should not be expected.

If you’re on the fence about buying a quadcopter and giving the hobby a try, then I think the Tianqu XS809W might be right up your alley. If you do wind up buying the XS809W, I do have a couple suggestions of extra parts that you should buy to enhance your fun.