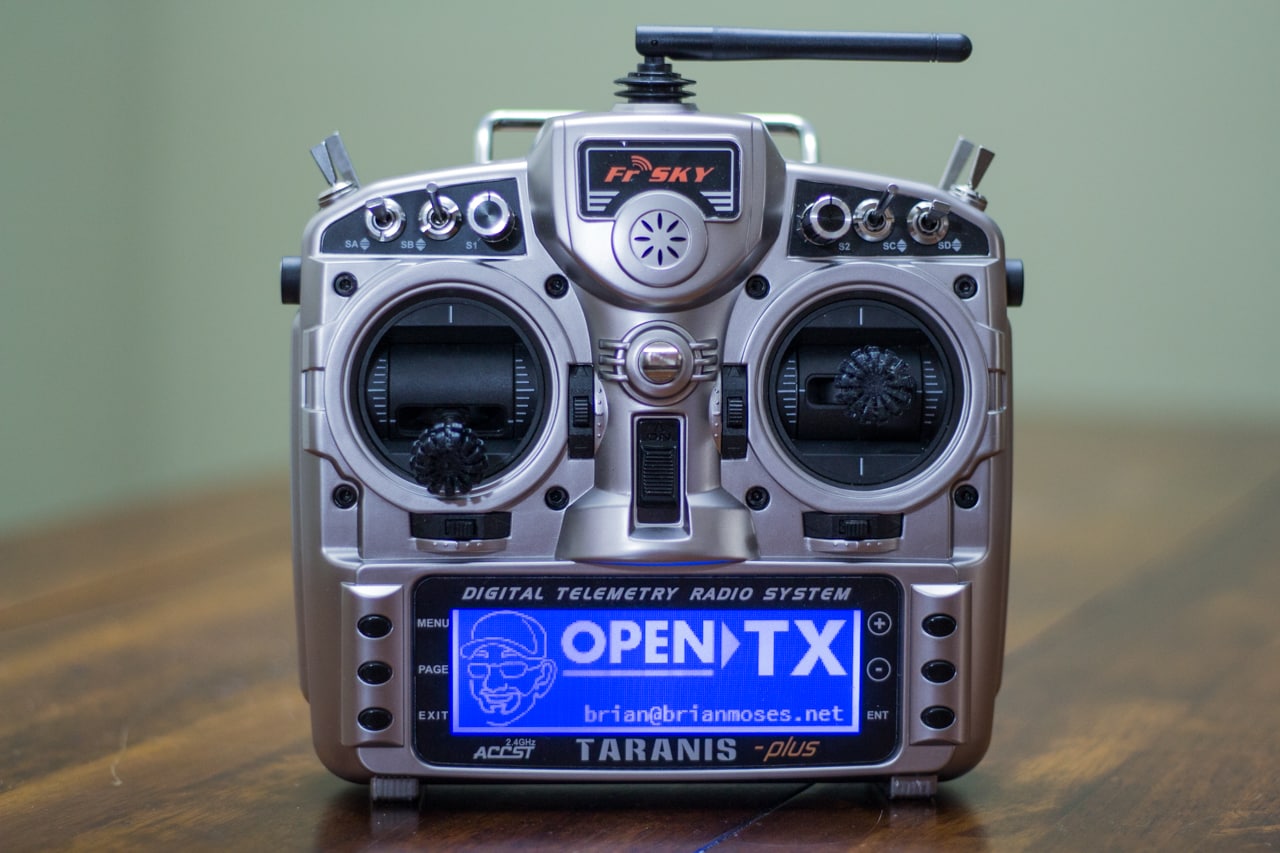 A few months ago, I built a DIY 450mm quadcopter in an exploratory foray into yet another hobby, and much to the chagrin of my wallet and my free time, I was hooked. As I began to form a very rudimentary understanding of quadcopters, I quickly began to realize that my Spektrum DX6 was going to hold me back. Please don’t conclude that this is the fault of the Spektrum DX6— it is a fantastic transmitter! It’s worked with my couple quadcopters well, others’ quadcopters that they’ve loaned to me to try out, and switching between the different quadcopters on the transmitter was quite easy. I was pleased enough with the Spektrum DX6 that I bought one as a gift for Pat to nudge him into the hobby. Overall, I was very happy with the Spektrum DX6.

You might be asking yourself, “If Brian Likes the Spektrum DX6 so much, then why is he replacing it?” The answer to that is easy: cost and channels!

In order for a transmitter like the Spektrum DX6 to work, it needs to be paired up with a receiver like the Spektrum AR610, or the vehicle needs to have the appropriate receiver integrated into its electronics. If you come to the realization that you want multiple drones for multiple different purposes, switching your transmitter starts getting more and more expensive due to all of the new receivers you’ll have to buy for your collection of vehicles. Once I realized that I wanted at least three different quadcopters for different purposes, I began to realize that the cost of switching transmitters was going to be less expensive if I made a switch sooner rather than later.

In considering upgrades to my Spektrum DX6, the number of available channels was also an important factor. The Spektrum DX6 has six channels, all six of which are being used by my quadcopter’s basic functions: an arm switch, a flight-mode toggle, throttle, aileron, elevator, and rudder. When I want to add functionality for aerial photography, like a remote control gimbal, more channels would be needed to add those features. It’s not entirely accurate, but I think a good rule of thumb is to assume that additional features on radio-controlled vehicles are going to require additional channels. 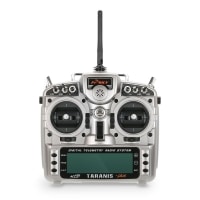 After some careful consideration, I wound up on planning to upgrade my Spektrum DX6 by replacing it with the Taranis X9D Plus. This decision was made infinitely easier when I was able to find an interested buyer for my Spektrum DX6, my Blade Nano QX, and a set of Nano QX batteries in a fellow TheLab.ms member. He just so happened to need a transmitter because he was building one of Pat’s PH145 quadcopters at the TheLab.ms’ most recent Quadcopter Build Weekend. It wound up costing me a little bit (roughly the cost of the Blade Nano QX and batteries), but that drone wasn’t going to be compatible with the Taranis X9D Plus. I wound up deciding it’d be less expensive in the long run to simply replace the Nano QX with something comparable—or better!

When my friends at Gearbest.com offered to send me the Taranis X9D Plus to review, I leapt at the chance. However, had I not been sent the Taranis X9D, then I would’ve purchased one for myself without any doubt. For starters, it’s a few dollars cheaper than the Spektrum DX6, but more importantly the Taranis X9D has sixteen channels. Because aerial photography is in the future for me, using more channels is an inevitability. Based on the price and channels alone, the Taranis X9D seems to be the ideal match for me. The icing on the cake? The remaining specifications and features! 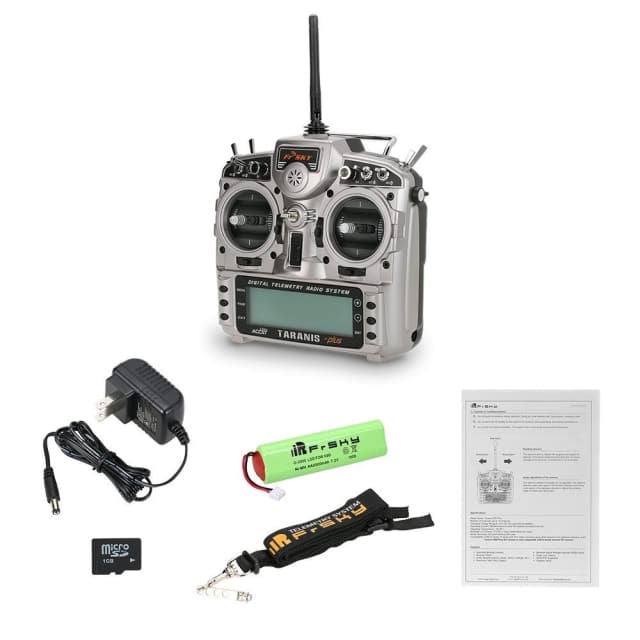 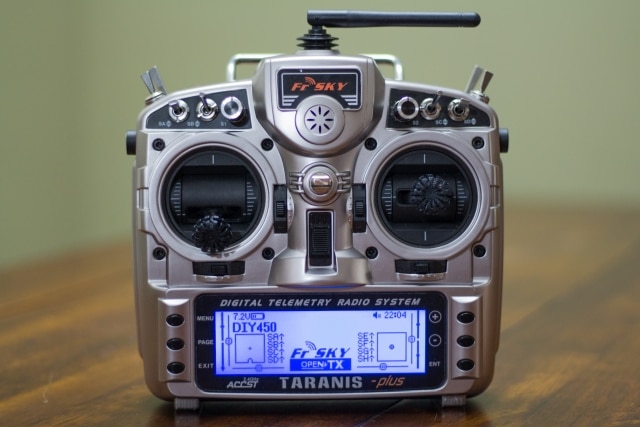 Having the option of making your changes to the transmitter’s preferences, model-specific settings, and other features from a desktop application instead of the user interface of the transmitter itself is a tremendous benefit. About the only thing I dislike about the Taranis X9D in comparison to the Spektrum DX6 is that its user interface on its display is really clunky. There’s only so much that you can do with 6 buttons and a small monochromatic display, but the Spektrum DX6 does that way better than the Taranis X9D. However, that disadvantage is pretty much rendered moot by the fact that you can download a desktop application and do the same things with your computer that you’d have to do on the transmitter itself.

But beyond that, the OpenTX Companion lets you do other things like use custom graphics for your different vehicles, use custom WAV files for the various prompts and alerts, and making updates to the splash screen. Being able to change the splash screen was by far my favorite! 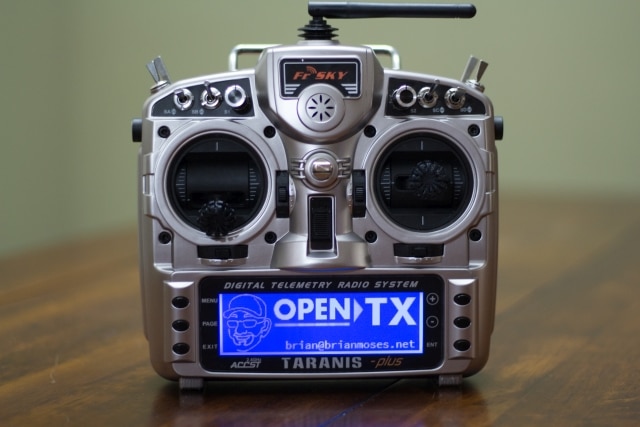 Lastly, the Taranis X9D seems to have an ardent community of people who are modifying/improving the X9D. As an example, these 3D-printed Taranis Thumbsticks have already found their way onto my transmitter. In browsing through all the Taranis X9D objects uploaded to Thingiverse, I’m quite certain that I’ll keep my own 3D printer busy for quite a few hours printing things to compliment my Taranis X9D.

And from what I’m reading, the new Taranis Q X7 could be a good route to consider—it’s $60-$75 cheaper than its older (and bigger) sibling. On the Taranis X9D, that extra money gets you a bigger display, 2 additional switches, 2 additional sliders, the battery-charging capability, MicroSD card storage, and others. Assuming you can find it in stock somewhere and you’re not as determined to do aerial photography as I am, the Taranis Q X7 is an excellent alternative. Personally, I’m glad I stuck with the X9D for the extra switches and especially for the sliders. The positioning of the X9D’s sliders is almost ideal for manipulating a camera gimbal without having to move your hands off the flight controls.

Overall, I think that the Taranis X9D is an excellent value. It’s got an incredible feature set at the price of transmitters with half (or fewer) features. If I had to do it all over from scratch today, I’d be tempted by the Taranis Q X7, but given the extra features of the Taranis X9D Plus—especially the two convenient sliders for use with aerial photography, I think I’d still wind up buying the X9D.