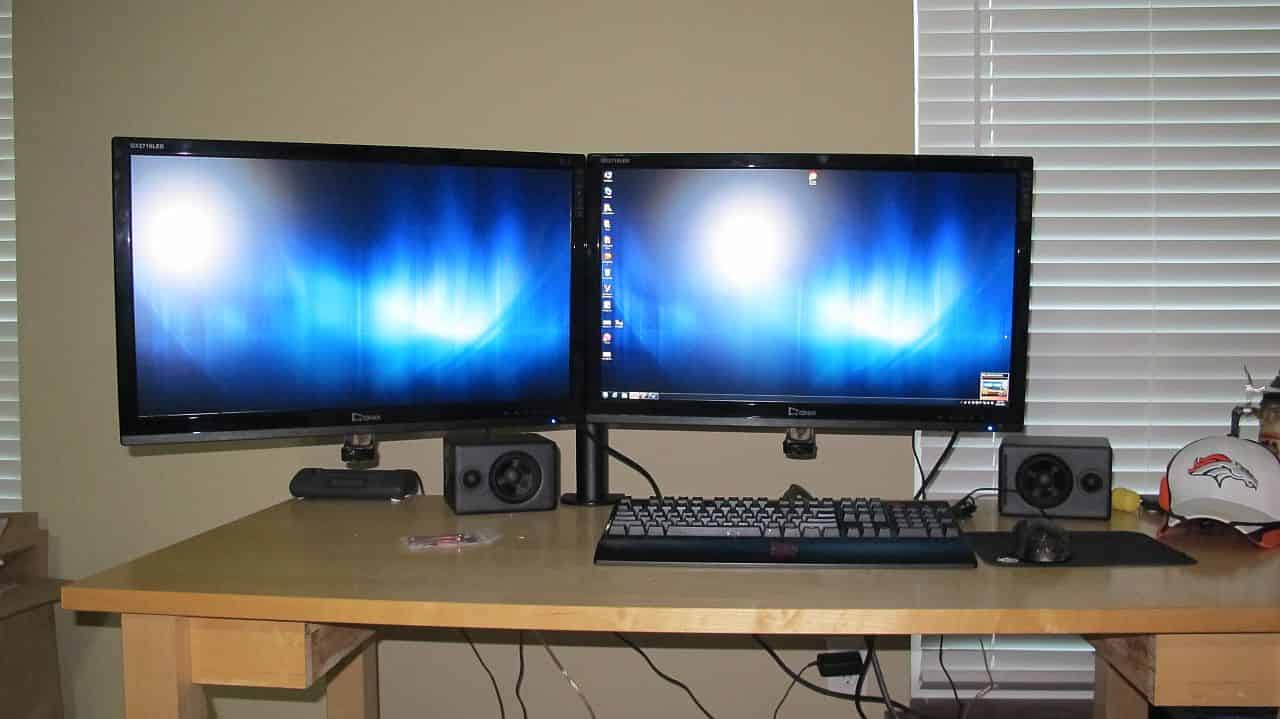 Back when I was planning on my computer upgrade at the end of 2012, I was admittedly a bit nervous. I’d decided at the time to switch from a couple 23” displays to a single 27” WQHD monitor. My actual resolution was increasing, but the amount of space it occupied was going to be a bit smaller. Plus, I’d been using dual (or more) monitors for probably close to a decade. My first dual-monitor setup involved two 19” CRTs; those monitors were so big and took up so much of my physical desktop that during all-night gaming sessions I broke out my SPF 70 to prevent a sunburn.

Pat had originally turned me on to the QNIX 27” WQHD monitors in the first place. When it came time for his own upgrade he went all-in and bought two new 27” QNIX 2710 monitors earlier this year. I’d be lying if I said I I wasn’t a little bit jealous. Then, my envy grew a bit when he bought a nice mount. And then I completely boiled over when he overclocked the refresh rate and claimed that it was improving his Team Fortress 2 performance, including crediting it with a particularly infuriating kill of me during a payload game.

Unable to manage my jealousy, I decided to go ahead and follow in Pat’s footsteps and advice.

Pat actually suggested that I buy a bigger mount than what he bought. He found that his dual-monitor mount was barely big enough. In his first edition of the blog, he recommended moving up to a bigger mount to give yourself additional flexibility. However, what we found was that the arms were so long on the quad arm mount that it wasn’t possible to center both monitors. The closest they’d get was between an inch or two apart. Pat went home that night and took his entire mount apart and brought two of the shorter arms over the next day. We wound up swapping two of his shorter arms for two of the longer arms from my mount. The result was two perfect 27-inch dual monitor mounts for each of us.

I think our recommendation would be that you buy one of each mount and swap arms just like we did. But if you don’t have a friend looking to buy two new monitors too, you’re probably better off buying this dual-monitor mount:

Using information I gleaned from this thread on Overclockers.net, I started playing with overclocking the monitors’ refresh rates. What I found was that one monitor easily overclocked to 120hz without any problems. However, the other monitor had problems at 120hz and even at 110hz. I tried swapping the DVI cables between the two monitors, but that didn’t change the results. Ultimately, at 96hz everything displayed quite nicely on both monitors. Like Pat, I fired up Team Fortress 2 and noticed an immediate improvement in playing the game. I didn’t quantify it with any kind of framerate counter but having spent hours playing TF2, the experience was much smoother. 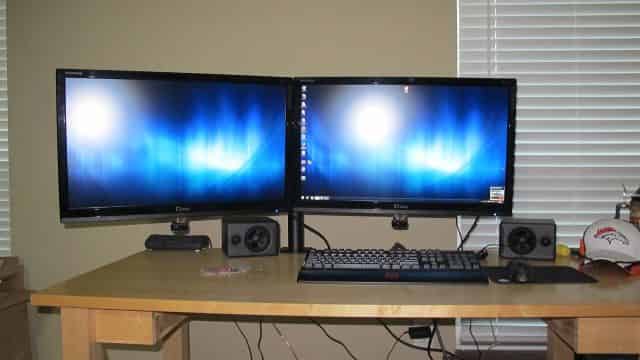 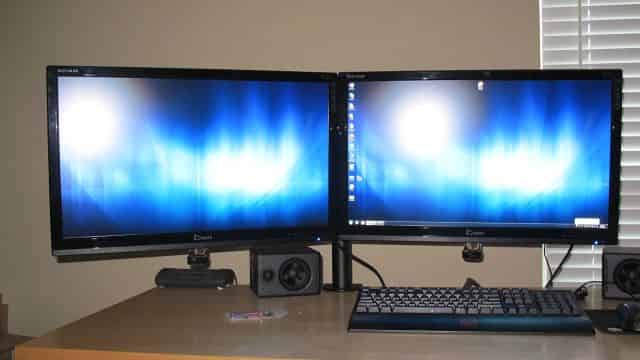 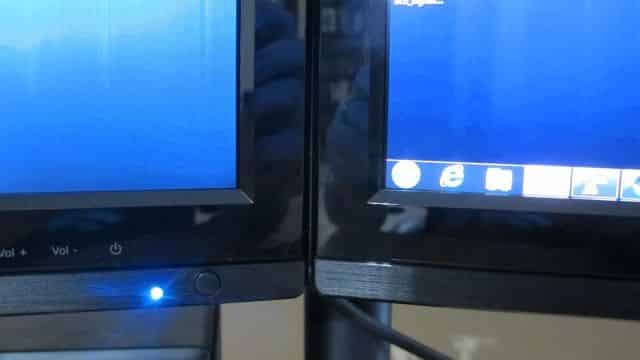 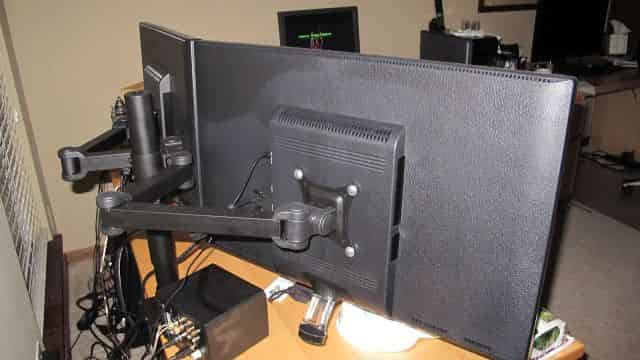 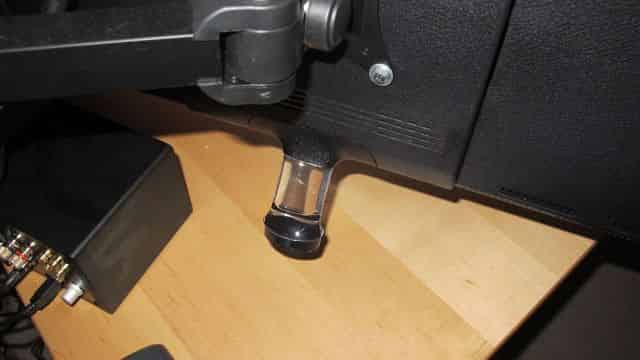 Please excuse the mess of cables behind my desk and my computer, I’ve sorely needed some cable management back there. Adding an additional power adapter, power cords, and DVI cable back there has highlighted to me how out of control that tangled mess has become. Buying this additional monitor has inspired me to think about cable management and will be the topic of an upcoming blog in the near future.

More or less, a shining review was a forgone conclusion. My experience with my first QNIX 27” monitor when upgrading my computer in late 2012 was so positive that it was a no-brainer to follow Pat’s lead and buy two monitors. The price-per-performance simply can’t be beat. If I had a much, much wider field of vision, I would’ve considered buying a third monitor to add to it. But I can’t imagine being able to see all of that screen real estate all at once and make use of it. If anything, there is definitely parts of either monitor which I can’t see without turning my head.

About the only thing that I’d consider complaining about is that the leg from the built-in monitor stand is permanently affixed to the casing of the monitor. The only thing that could be removed was the base of that monitor stand. So on each monitor, there’s a bit of a dangling phallus hanging down. It’s nothing that a little rotary tool wouldn’t fix after a few minutes’ worth of work. Either that, or debezeling the entire monitor, which Pat’s in the process of doing to his own monitors. Depending on how that turns out, I may continue playing the copycat.

Perhaps a tri-monitor setup would be more feasible by mounting each of these monitors in portrait rather than landscape. However, with as wide as the monitors are in landscape, you’d probably incur some strain looking up at the monitor in portrait. In the end, having more screen real estate than I can effectively see at once is a great problem to have. Especially when you consider that I didn’t break the bank in order to get all of it.

Ultimately, I can’t foresee upgrading these monitors in the next couple years. Definitely not for 4K monitors and 5K monitors, which are just too expensive to justify at the moment. And even as they fall in price, I expect display manufacturers like the makers of the QNIX 2710 zeroing in on the people in the market for the best bang-for-buck and making something much more affordable, which is almost always the best way to get me to consider spending money on your products.