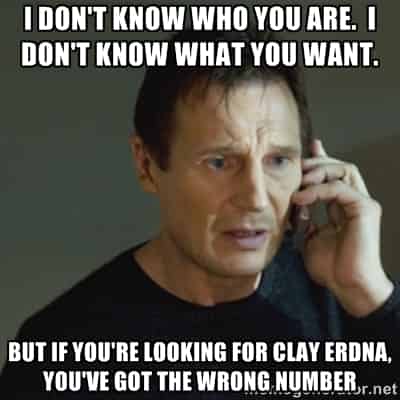 A while back, I waged war on the robodialers who call me repeatedly about pay day loans. My initial strategy was two pronged: the Android app, Sanity, and a penchant for occasionally wasting the time of my tormentors with outlandish tales of my financial misdeeds. In fact, just this afternoon I explained to “Preston” that I had financed a military coup in Myanmar and was desperate to pay for a World War 2 era aircraft carrier. During this phone call, if I had a dollar for every time Preston asked “What?!” or “Can you repeat that?” during our conversation, then I probably could have started my own pay day loan company.

(Un)fortunately, phone calls with these people have taken a nasty turn recently. Most days, I nicely explain that “Clay Erdna” doesn’t have my phone number any longer and that it no longer belongs to him. Usually this just confuses people and they hang up; apparently wrong numbers aren’t in the script. One time, I even tried to explain to Bob that people who usually pursue pay day loans aren’t usually making sound, long-term financial decisions and that he shouldn’t be surprised at all when those people’s mobile phone numbers get disconnected and resold to new customers. Again, logic doesn’t have any place in the telemarketer’s script—Bob couldn’t handle my majestic prose and hung up.

Even worse, apparently the hiring standards overseas have declined massively. I have had a rash of very angry marketers who don’t seem to appreciate me wasting their time in return. Earlier this week, I had the following exchange with “Percy”:

Me: I’m sorry, there’s nobody at this phone number by that name.

Me: That’s nice, but Clay Erdna doesn’t own this phone number. I suggest you find a better number for him.

“Percy”: You are Clay Erdna.

“Percy”: Tell me your name!

Me: I am an international man of mystery, I am forbidden from disclosing my true identity.

“Percy”: Then you are Clay Erdna, I don’t believe you.

Me: I can’t really control what you believe. But metaphysics notwithstanding, I am not Clay Erdna.

Me: I’m sorry, I used big words. I am not Clay Erdna, did you understand that?

“Percy”: You are a fucking liar.

Me: I am astonished, “Percy” (I did air-quotes while on the phone, but “Percy” couldn’t see me) at your language and demeanor towards a potential customer. It’s shocking!

Me: I’m not sure that’s possible, “Percy.” We’d probably have to be on the same continent first.

Me: Then why would you ask me for sex?

Me: I’m pretty sure that this is an unusual way to successfully sell a pay day loan, “Percy.” What exactly is your sales technique here? I’ve never experienced it.

Me: “Percy,” you made it my job to waste your time when you didn’t believe that you had the wrong number. Each and every time that you call, this is what’s going to happen when you call me. Do you understand?

I try to be pretty bold in the things that I write, but I can’t honestly write what “Percy” said at this point. Not because it was foul, but because it was pretty unintelligible. It was mostly a collection of grunts, broken English, and the F-word. However, I’d like to apologize to my mother, my sister, and even my puppy, Zoe. “Percy” has promised to do very rude things to you all. However, don’t worry—he thinks I’m Clay Erdna.

Before he finally hung up, “Percy,” promised to call me five hundred times a day. Somewhat true to his word, I’ve had a slight uptick in these phone calls, some of them hostile and profane. Typically I welcome them; it exercises my inner need to be mischievous and it breaks up the monotony of many workdays. I mentioned in my last blog on the subject that I was using the Sanity app and a special Google Contact to ignore these phone calls. I thought I’d share that contact with the Internet. Each time a new one comes in, I add it to my Spammers contact in Google Contacts just as it shows up in Caller ID. (Download a copy:Google, Outlook, Generic CSV) It’s up to ninety-something numbers in a little over a year. It usually took a handful of calls from each number before I added them to my ‘Spammers’ contact, and to make matters worse, most of the calls I get show up as “Unknown” or “Anonymous” on Caller ID, which I’m afraid to add to Sanity to ignore since I occasionally get a legitimate call that shows up as “Unknown” or “Anonymous.” Not all of these are pay day loan people looking to sell a loan to the unfortunate Clay Erdna, but I bet you 95 percent of them are for him.

The real shame is that apps like Sanity are your only defense against these kinds of calls. My prior experience taught me that the mobile carrier basically has no options for you. And the National DoNotCall Registry is pretty laughable. I wish the FCC wasn’t so toothless, behind the times, in bed with the industry, and out of touch with the actual users.