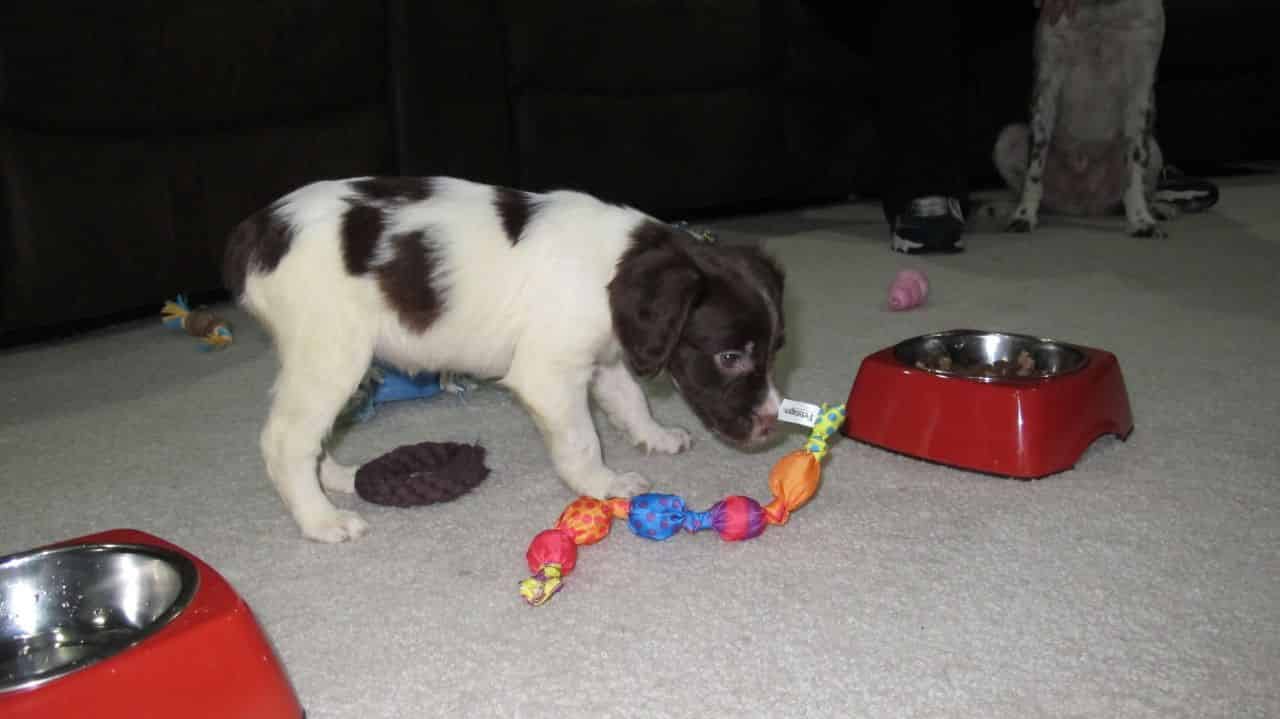 Almost three years ago, we made a decision that I consistently rank in my top three of “Best Decisions I’ve Ever Made”. We added a dog to our family. It’s something that I had wanted to do for many, many years but I couldn’t justify. I had tiny little apartments and I was spending the majority of my days away from my house at work or school. Considering dogs’ social nature, it just wasn’t fair for me to get a dog. But, I always viewed this as a temporary setback. When the timing was right, I would get a dog it was on my bucket list.

I can attribute this to my extended family and my childhood. My aunt and uncle had two dogs growing up, Ashes and Smokey. When you google for “perfect dog,” it’s criminal that pictures and biographical information on those two dogs aren’t the top search result. They were exceptional dogs, well-tempered, even better behaved and an absolute hoot to take to the park and throw the tennis ball with, even after the tennis ball was soaked with doggy drool and your arm was sore from throwing so many times.

Shortly after buying our home, my wife and I began seriously discussing getting a dog. On one vacation, I loaded down my tablet with e-books on breeds, raising dogs and whatever else I could get my hands on. On that vacation, I must’ve gone through more than six hundred pages of material doing research. We wound up deciding on a Brittany (formerly known as Brittany Spaniel) and began searching for a breeder. I was conflicted with this, because I’d previously adopted a stray cat and a kitten who was about to get taken to the pound. As a society I believe that we’ve done a disservice to dogs and cats and all too often these animals wind up in pounds or worse. Ultimately, we felt that as inexperienced dog owners, that a puppy was the best choice for us.

We emailed a few people who had listed puppies in various places and wound up finding a family about an hour away who’d had a litter of Brittany puppies that were born on May 9th, one day before my birthday. We found this coincidence fortuitous and arranged to meet the puppies. We wound up leaving that day with a liver and white Brittany, who we named Crockett. No, not after Davy Crockett, but a Americanized version of “Krokette,” a German potato side dish that I’d found delicious in travelling to Germany to be with my wife. She picked Crockett out because I had named one of my cats Tater and because I have a bit of an odd potato fascination. If you fast forward three years I’ve found this to be an infinitely rewarding and wonderful decision only surpassed by the decision to get married and the decision to buy our first house. 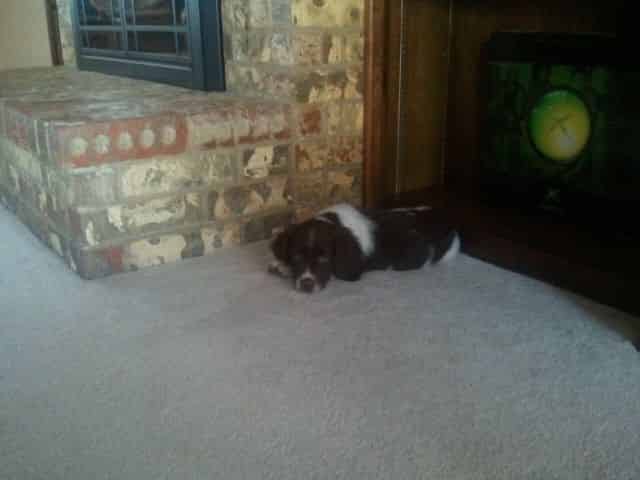 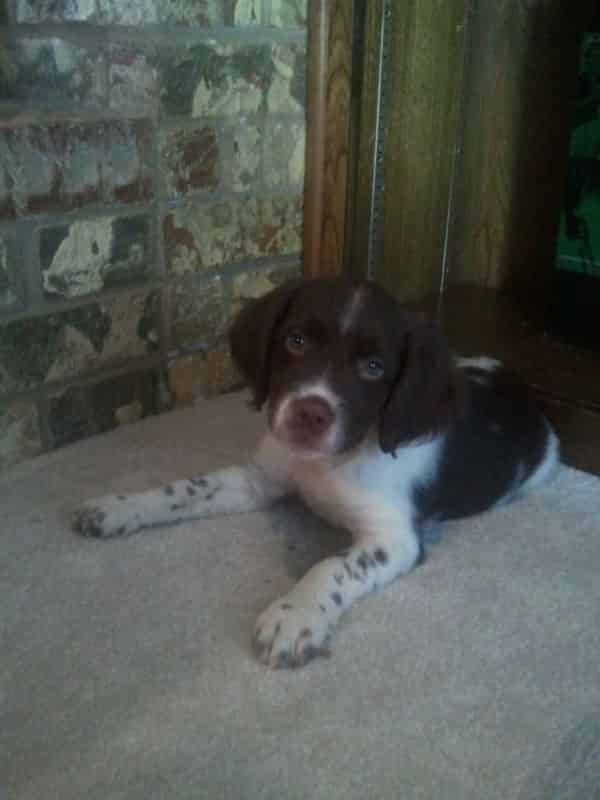 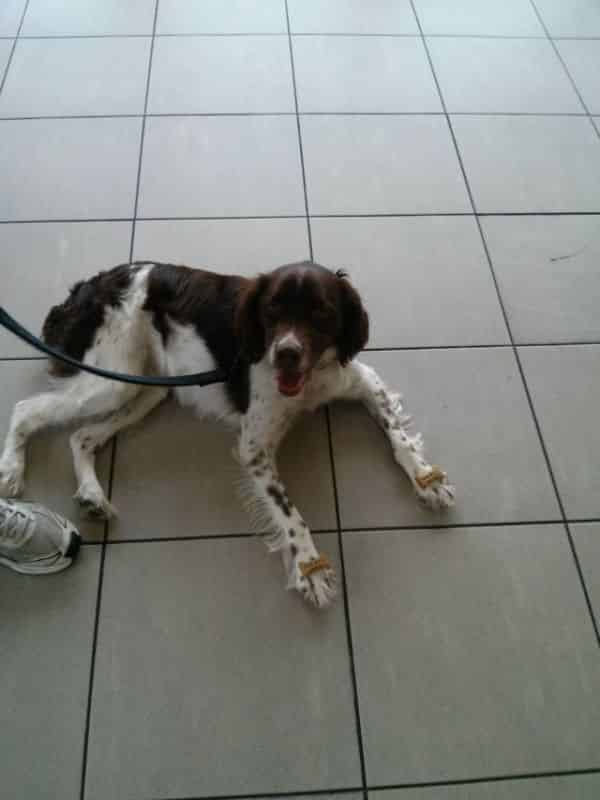 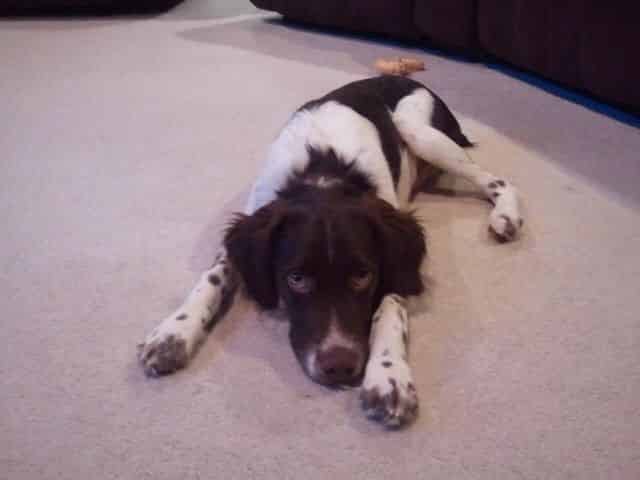 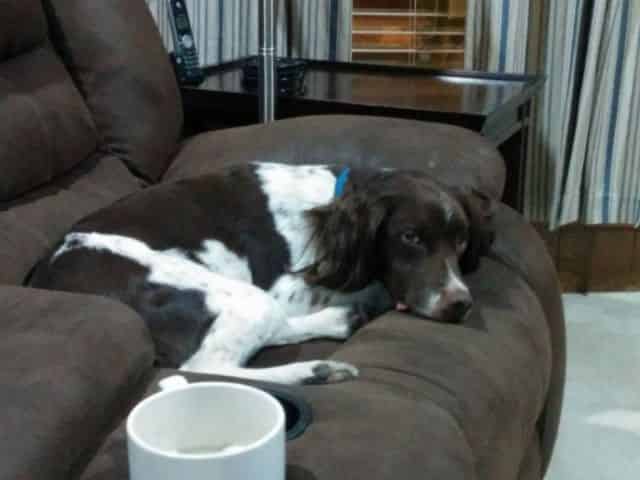 Originally, we were hoping to find a dog roughly Crockett’s age or maybe a bit younger. It’s my impression that shelters are full of adolescent dogs due to people realizing how much work owning a dog is. Crockett was a knucklehead roughly until age 2, and then a light bulb came on and he turned into a pretty decent dog in what seemed like overnight. We were looking for a companion for Crockett nearly as much as we were looking for us.

Julia began exploring listings on the web pages of rescue groups in the area. When we began discussing it and decided that we were open to adding another dog to the family, I reached out to a number of rescue groups about dogs they had listed for adoption and found that the groups weren’t responsive and seemed to be overwhelmed by the number of applicants that they had. I checked out their websites, filled out applications, and even spoke to a couple volunteers from the groups but for some reason things didn’t materialize past the original contact. I got the impression that the rescue groups were overwhelmed by adoption applications and I assumed that for one reason or another, they didn’t feel like they had a dog that matched up well with our family although I can’t imagine why, which was disappointing, I felt that the ideal dog for us was going to be a rescue based on what we wanted, but for some reason it wasn’t in the cards.

Considering the hand that had been dealt to us, our winning play was to start poking around looking for the perfect puppy for us.

We wound up finding a breeder about an hour away who had a litter of puppies, 7 boys and 2 girls, who were ready to go home. We headed out this weekend into the aftermath of a historic ice storm to go check out the puppies. Specifically, we were looking for a female dog to reduce the likelihood of any kind of dominance conflicts with Crockett. However, as we slipped and slid across North Texas, both Julia and I agreed that we were most interested in picking a dog that made immediate imprint on us regardless of the puppy’s gender.

The breeders are a very nice family living on a nice-sized parcel of land. They have several dogs, including a few Brittanys, in addition to chickens and horses that they also rescued. We took Crockett with us, and he was mesmerized and wanted to check everything out. He was incredibly excited and would later embarrass his parents by having an accident indoors.

The breeders first let us check out the two females one of which they had already informed us had displayed some excellent hunting traits and that they preferred if they found someone looking for a hunting dog. Julia’s coloring preference on Brittanys is for the liver and white ones, just like Crockett. I like both, but I probably lean a bit to the amber-and-white colored Brittanys. The appearance of the dog wasn’t really on our mind at all, but the Mom was liver and white and so were the majority of the litter.

Zoe was handed to me, and after sniffing and licking my fingers she immediately wormed her way up my chest burrowed into my hoodie and snuggled for nearly the entire time we were there. We checked out the parents, met their other Brittanys and the rest of the litter, but this little girl had already won me over. We finalized some paperwork and started to head home much to the dismay of the breeder’s young son. I promised him that I’d blog about the puppy and told his mother that any time they wanted to see a current picture or anything all they had to do was ask.

The first few nights were a bit rough, full of whining, crying, pooping and peeing. None of this was terribly unexpected and as the week has progressed the accidents inside the house and the crate training are going very well. On Wednesday night, Zoe didn’t whimper or fuss at all at night when being put in her kennel. Julia and I have been waking up every 2-3 hours and taking the puppy outside for bathroom breaks, and we intend to employ some sort of neighbor/friend/pet sitter to help us out during the day the first couple months to try and help make sure she doesn’t make any messes in her kennel.

Crockett has been pretty incredible. He’s an energetic and playful guy, so I was a bit concerned he’d play too rough or worse, that he’d sulk and be envious of the attention his new sibling is getting. But he’s been insanely gentle and patient with the puppy. He really seems to appreciate having an animal in the house who wants to play with him, since his other two house mates don’t do anything but hiss and punch him in the nose.

So far, Zoe’s been a joy to have around the house. Julia and I are each trying to work from home as often as we can. I had a great work-from-home day early in this week. The puppy would eat, we’d go outside, we’d play and then she’d pass out and sleep on me for a couple hours and then we’d repeat that process. Aside from a little bit of extra messes around the house to clean up and the fact we’ve partitioned the house using baby gates, we don’t really have any complaints, and we feel like we brought home the pick of the litter! 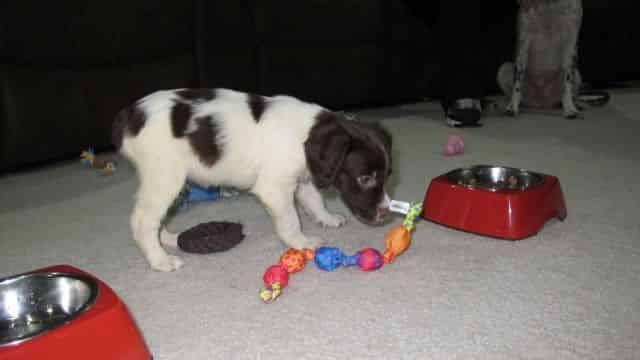 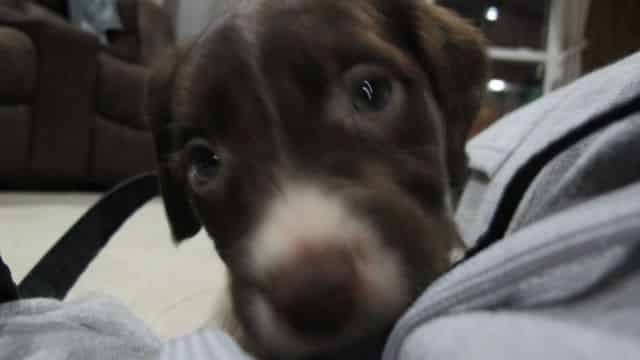 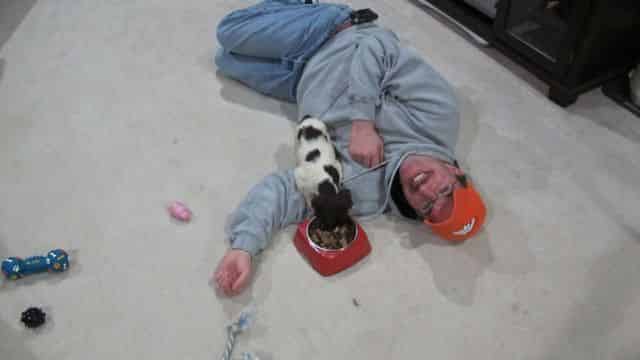 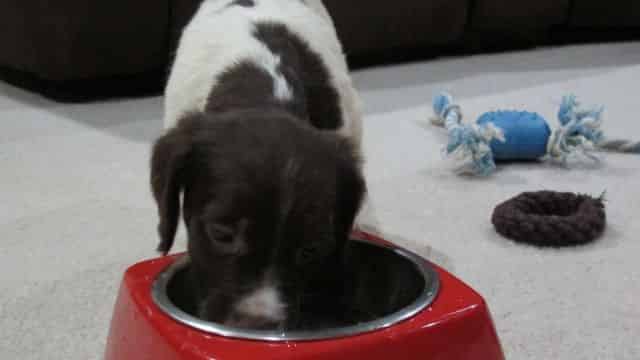 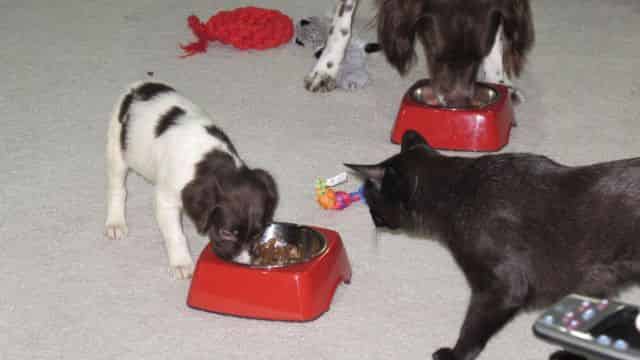 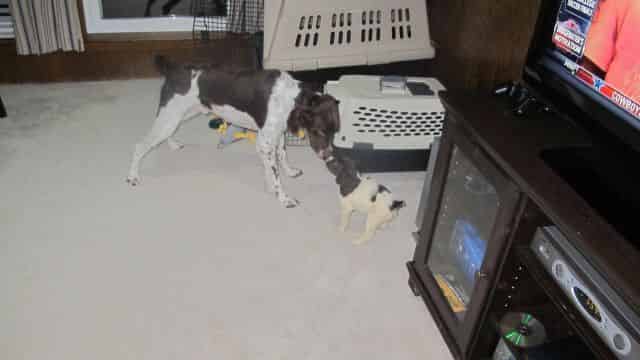 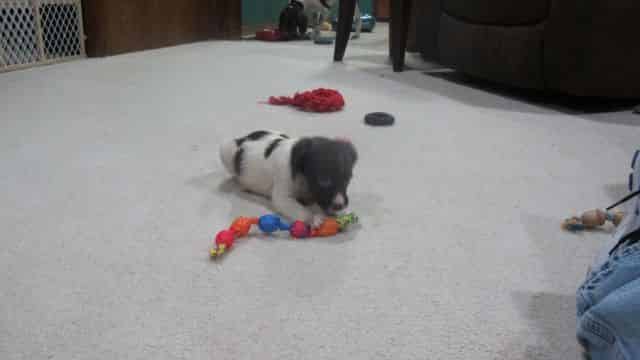 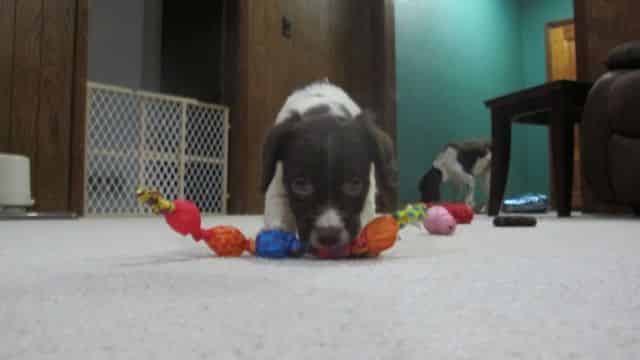 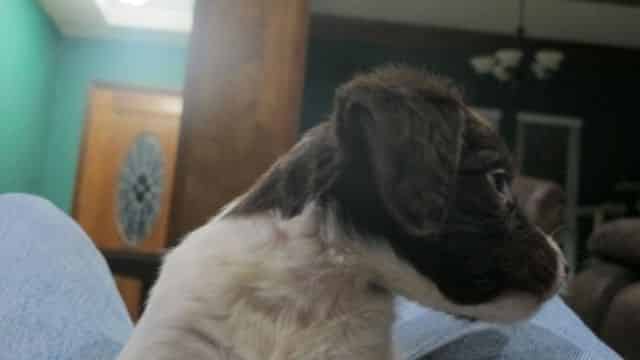 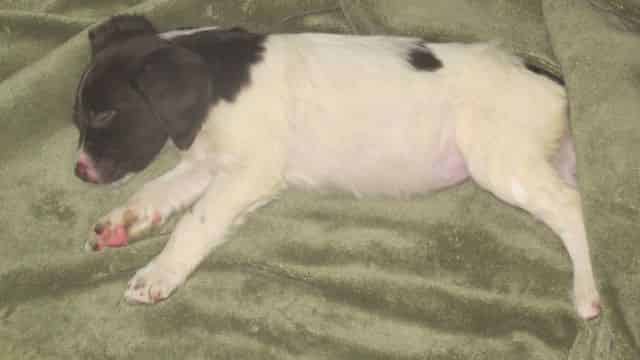 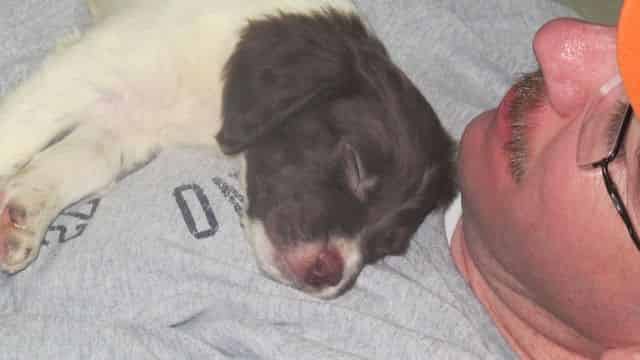 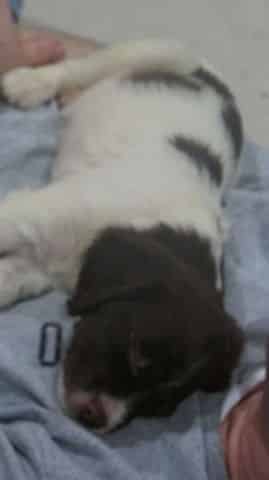 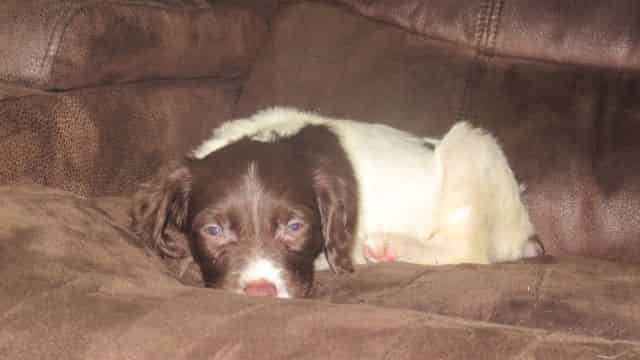 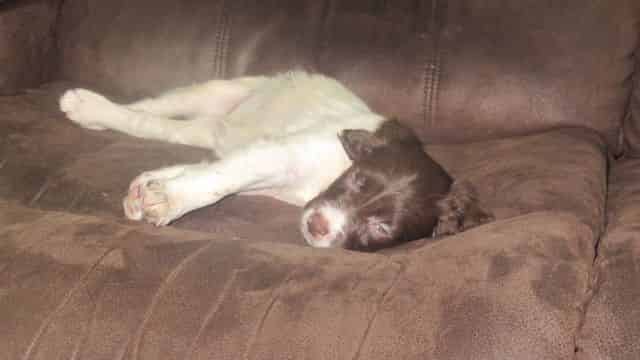 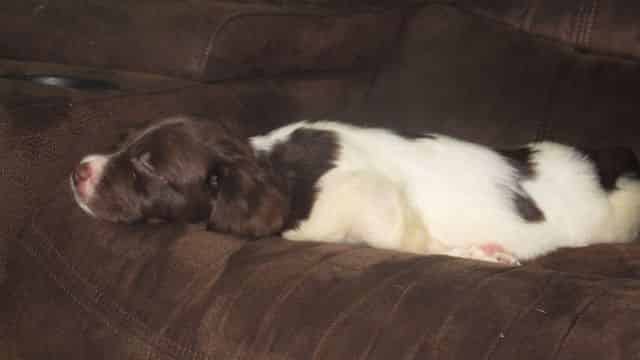