In an earlier blog, I wrote about a do-it-yourself Wireless Charging option for the Samsung Galaxy S3, which I absolutely loved. However, in the long run, the fragility of the back of the Galaxy S3 and the extra bulk of the wireless charging bits caused the cover to fracture in a couple places. Initially, my plan was to just buy another cover for the Galaxy S3 and to swap the wireless bits into it. But ultimately, I decided that the unfortunate combination of the bulge in the phone from my DIY wireless charging modification and my Galaxy S3 Car Mount was the combined cause of my issue. The car mount for the phone pinched down on exactly where the wireless charging bits were taped into the phone’s cover. I suspected that if I replaced the cover, I’d just wind up in the same spot a few months later again.

I wound up heading out to Amazon and seeing what sort of new Galaxy S3 wireless charging options there were. I was surprised at the number of options that showed up that hadn’t been available previously. This included someone who was selling the same modification that I had found online. 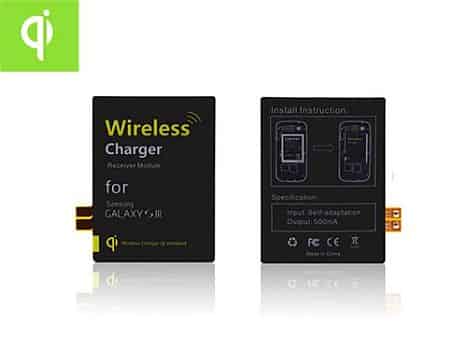 Immediately, the QI Standard Wireless Charger Charging Receiver Tag caught my eye. It looked to install directly in the phone and was built to the Qi inductive power standard. This was a double bonus for me since it was inexpensive and because we happened to have a Nexus 4 Wireless charger at the house for my wife’s phone which was Qi-compliant. I planned to buy the Qi Charging Tag and a new back for my phone and to see if I thought it would easily replace the Palm wireless charging bits. Assuming that the test was successful, then I could look into some Qi chargers and pick up two to replace the Palm Touchstones that I had been using. I promptly ordered my Qi Charging tag and the new back for my phone.

In reading the reviews, I was definitely aware that the new Qi Charging Tag would create a slight bulge of its own on the back of the phone. But in looking at the images and at the back of my phone, I was confident that the bulge would be higher up on the back of the phone, and the region that was bulging would not get pinched as severely aby the car dock, hopefully eliminating any cracking like I had seen before on the phone.

When the parts showed up, it took more time for me to find my wife’s Nexus 4 charger than it took for me to hook up the new pieces. The charging tag basically lies down on the battery and has some contacts that go right over the charging terminals. It has some adhesive to hold it in place. The bulge the charging tag created is slight, but it’s noticeable. The phone does not sit flat on a flat surface. I was fine with this because the Palm Touchstone charging bits essentially had the same effect. The only difference is that the Qi Charging Tag’s bulge was more towards the middle of the phone, and the Palm Touchstone charging bits were down lower on the phone. Once I had everything put back together, I set it on my wife’s Qi charger and it started charging right off the bat, which was great news. 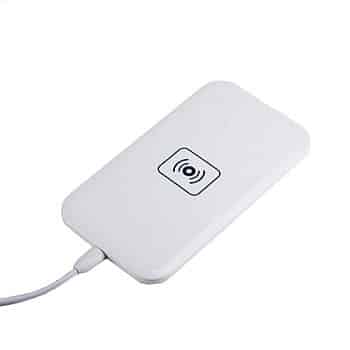 I wound up considering quite a few different Qi chargers, and ultimately I settled on a couple of GMYLE Qi-enabled Wireless Charging Pad (Model #: Qi1000AS). At the time I bought them, they were around $25. I wound up paying a bit of a premium to get the 1000mA version of this charger.

In the reviews of the Qi1000AS on Amazon people seemed to have two recurring complaints. Firstly there’s a red/green LED: the red LED is on any time the charging pad is powered, and the green LED flashes any time the phone is charging. This would be insanely annoying anywhere you want the room to be dark, like a bedroom. Secondly, it likes to beep! It beeps when you set it down and it starts charging, and then it beeps again when it thinks it’s finished charging. If you leave it on the charger at full, then the phone will run down and then start charging again (another beep) until it’s fully charged again (another beep). Leaving the phone on the charger indefinitely could lead to an infinite cycle of annoying beeps. Thankfully, in some of the reviews that I was able to dig around in, it didn’t sound like it’d be a huge hassle to open up the charger and “fix” either of these problems with a pair of wire cutters. In the end, I have the wireless charging pads at both my computer at home and then at my computer at work. I tend to only charge a little bit on these chargers during the day, and then there’s a traditional charger in my bedroom where I keep the phone overnight. The beeps and the LEDs are not very distracting at either of my desks.

When comparing these two wireless charging options, DIY vs Qi, my preference is still the DIY method. The modification is very easy and only involved a little trial and error on my part. The chargers are dirt cheap, so you could theoretically have one just about anywhere you would want. The only drawbacks that I can see is the amperage of the charger (500mA) and the fact that Palm’s days are numbered. What really ruined it for me is trying to use it as the same time as my car charger and dock. The combination of the two put additional strain on the flimsy Galaxy S3 back cover and cracked it. There might be something a cleverer individual could do to avoid this like relocating the charging bits in the phone cover or using a different style car-mount. 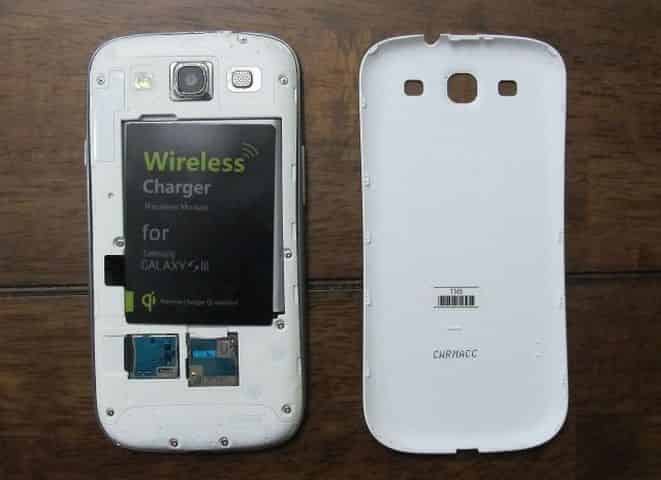 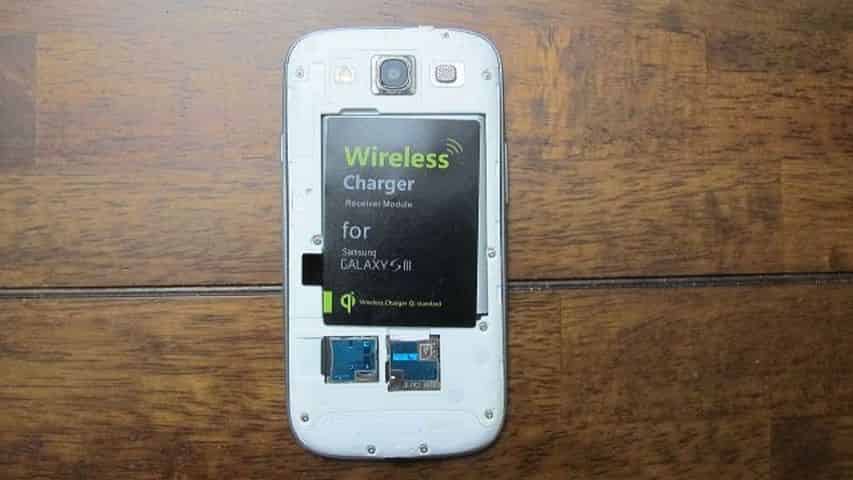 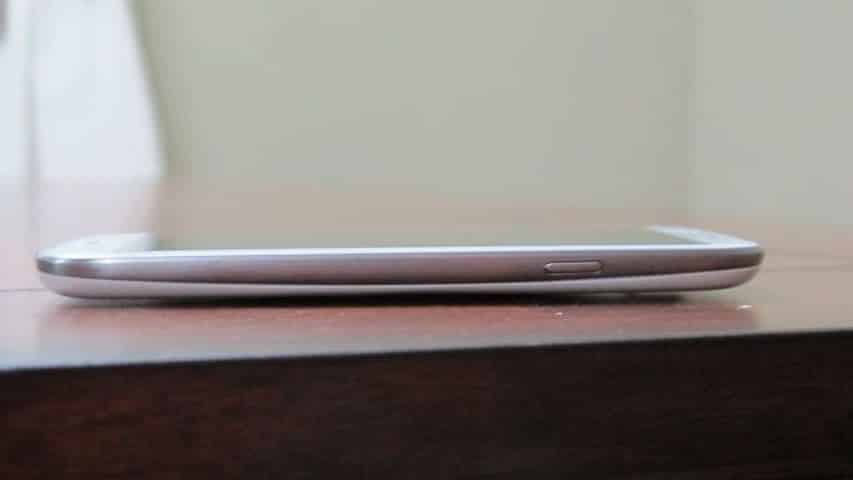 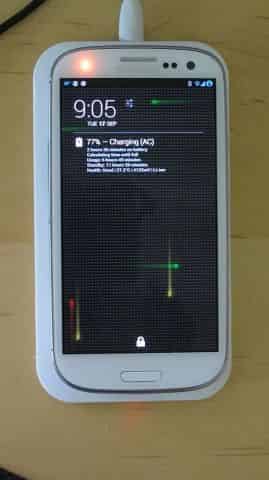 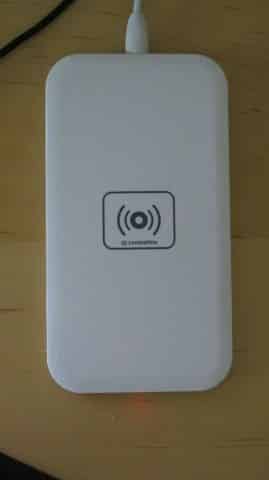 In this case, my reality trumped my preference, and I went with the QI Standard Wireless Charger Charging Receiver Tag and the GMYLE Qi-enabled Wireless Charging Pad (Model #: Qi1000AS). I chose this because I felt that it was less likely to crack the S3 cover again and because I’m hoping that my next phone will be Qi-enabled and that 1000mA will be enough to charge that device; hopefully I’ll find that out in about a month.