Update: After almost three months, I’ve posted some feedback on my experience so far with the wireless charging added to the phone. Please see the Update section at the end

I bought my wife a Google Nexus 4 for Christmas and then for our anniversary, I purchased her the wireless charging accessory that is available for it. I was almost instantly green with envy. As a pretty avid user of my smart phone, I very rarely make it through a day without needing to charge.

I wondered how difficult and expensive it would be to add wireless charging to the Samsung Galaxy S3. I had read rumors that Samsung would be selling a wireless charging system, but the phone’s been out quite a while now and nothing seems to have reached the market. Considering the fact that Samsung’s marketing department is cranking up on the Galaxy S4, I’m dubious about whether something will come out for the Galaxy S3 from Samsung.

Unexpectedly, I stumbled across this thread on the XDA forums which detailed an “easy” way to take pieces from obsolete Palm phones to add wireless charging to the Galaxy S3 in five minutes. In reading the thread, there didn’t seem to be anything that I felt I couldn’t do, and in looking at prices on Amazon, the parts were going to add up to much less than what I paid for my wife’s charging mat.

Over the years I’ve found that when someone says something is “cheap & easy” on the Internet to do yourself, somehow it manages to turn into expensive and frustrating when I take it on. But considering the fact that the parts cost so little, I couldn’t help but give it a try.

I wound up deciding the magnets might be useful in getting the phone to align with the charger, so I went ahead and picked those up. But that’s a completely optional item. 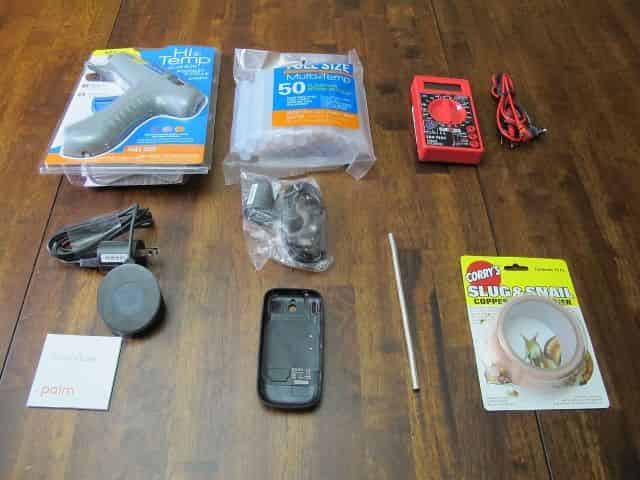 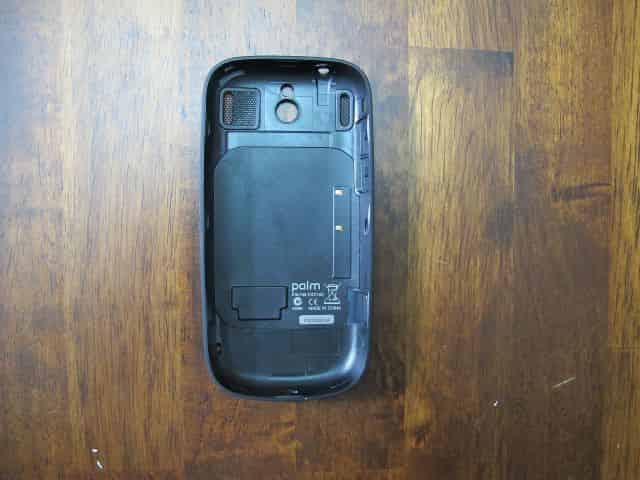 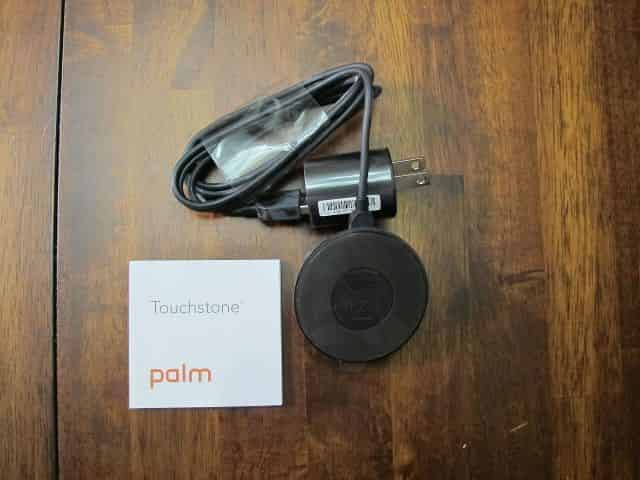 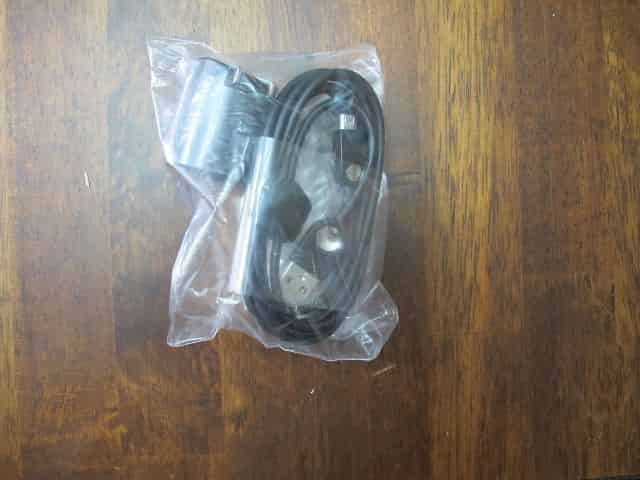 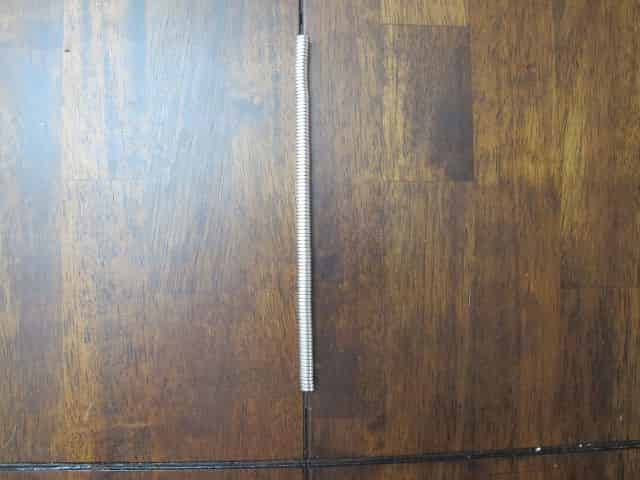 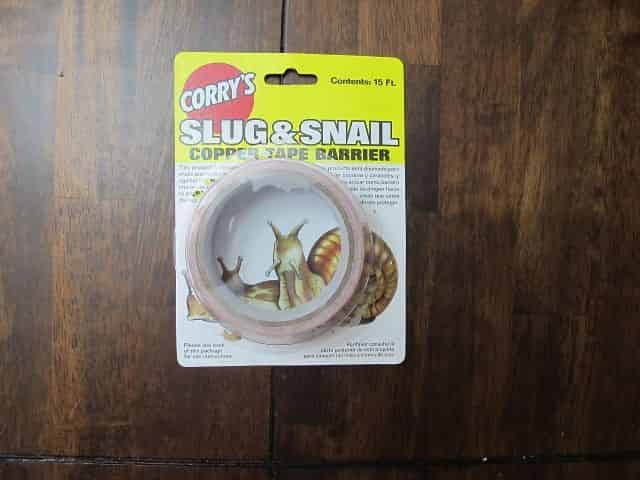 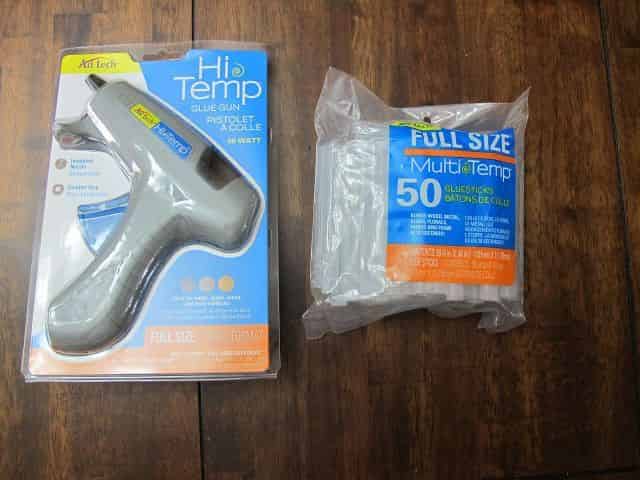 The long and short of the mod is that you remove the wireless charging guts from the PALM Pixi phone cover, flip it 180 degrees, position it correctly in the Galaxy S3 phone cover, and then use copper tape to connect the charging terminals in the phone to the wireless charging guts. Cheap and easy, right? Not necessarily so in my case. I followed the steps online pretty closely and found them to be adequate but left me wanting additional details, and ultimately either defective parts or my own inexperience caused me problems.

After getting everything put together and into the back cover of my Galaxy S3 I placed it on the charger and tried to read the voltage off the contraption. Sadly, the multimeter read 0.00. I futzed around for a good hour making sure the copper tape was taped down and there weren’t any loose but never could get any positive readings off of the multimeter.

I began to become concerned about a few things. Firstly, I had read in the thread, that positioning of the coil was important and could cause issues if you didn’t have the correct alignment between the coil and the charger. Secondly, I became concerned that I had defective or incorrect parts. And lastly, I was practically convinced that I had damaged the parts in the process of disassembling them somehow.

Assuming I had obliterated the electronics when disassembling and relocating the coil into my phone’s cover, I decided that I would order an additional Pixi Cover. On top of that, because I wanted to be able to charge via the Touchstone in a couple different places, I went ahead and ordered an additional Touchstone too.

Originally I had planned to nicely set everything using hot glue, but in the process I took everything apart and put it back together again in a variety of different configurations. When I got everything put together and functioning well, I simply decided that the scotch tape I had used to tack everything in place was going to be sufficient.

Having had these difficulties in my first attempt, I thought I’d write a detailed step-by-step of how I accomplished the task for the people out there like me who are more proficient in destruction than they are in creation. The difference between my successful and unsuccessful attempts was the liberal use of my multimeter at almost every step of the way.

Note: Apparently, this message isn’t present in many aftermarket phone ROMs. If you’ve flashed any ROMs, don’t freak out like I did if you don’t see the dialog pop up . In settings, check battery and see if it says you’re Charging via AC. 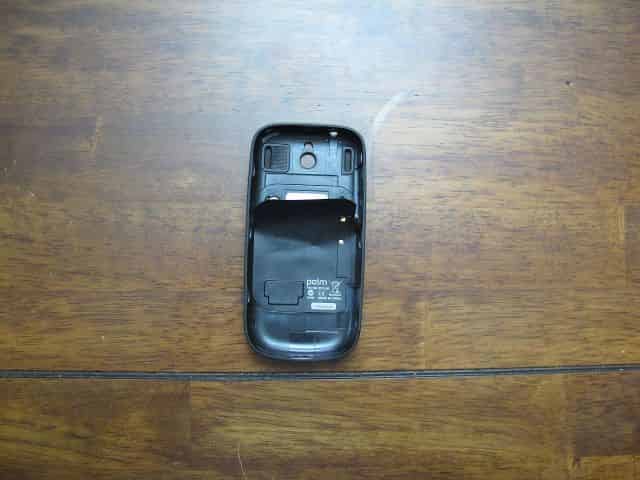 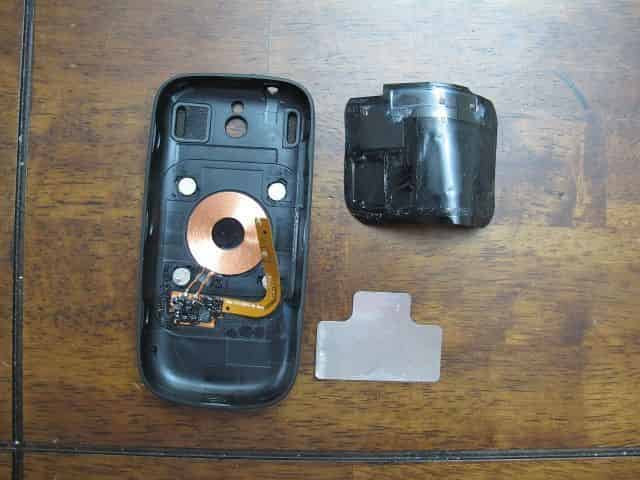 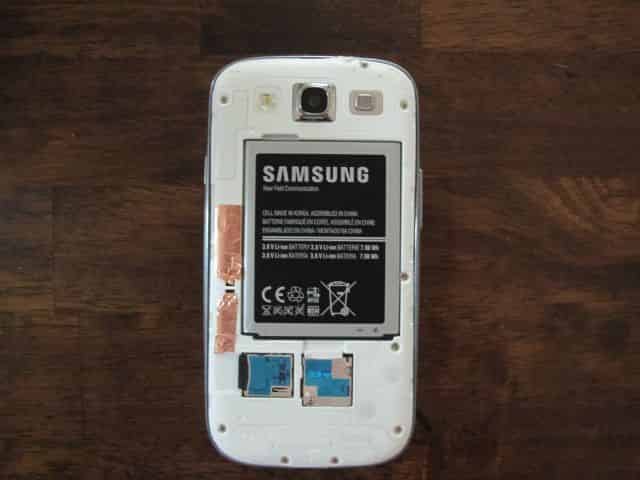 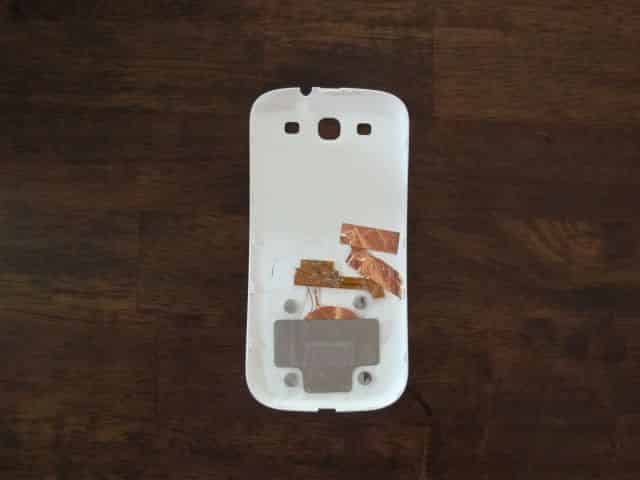 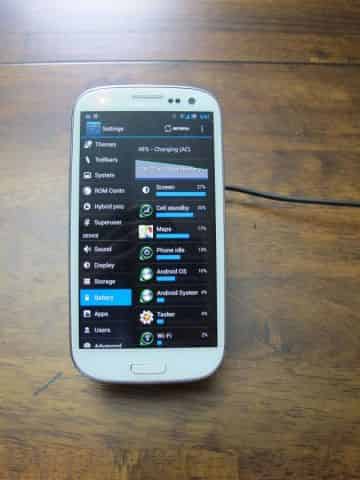 As the original author indicates on XDA, here are a number of things that could cause problems. In the course of this modification I ran into every problem except the second one.

In the event you’re worried about all the taking everything apart carefully and putting it back together, there appear to be options available for you. For around $20 on eBay someone is selling an assembled backplate for use with the PALM Touchstone. It’ll probably wind up costing you a few bucks extra but you won’t have to contend with doing these things yourself. Or, if you’re willing, you can spend anywhere between $40-$60 to buy a Galaxy S3 Wireless Charging Kit from Amazon, which contains all the same parts already put together for you.

This was incredibly easy to do, but it was also a little frustrating. I’m sad to say but humble enough to admit that the work isn’t necessarily in my wheelhouse. The parts are a little persnickety and it requires care and attention on your part in order to put it together correctly. According to the original author, it is a “super easy” five minute modification, which, if you’re familiar and confident, I imagine is entirely possible. However, in my case it took me a couple hours to get it working. I did take a little longer since I was working on writing this blog article and I also wasted a bunch of time unsuccessfully trying to improve upon the original author’s method. In the end, it was an interesting project and I’m pretty excited that I can just plop my phone down on the Touchstone and have it start charging.

My final thought is that this is a very good modification indeed. Other than an ever-so-slight bulge on the back of the phone, it’s hardly noticeable at all. It’s incredibly inexpensive; I wound up spending roughly $20-25 to add wireless charging to my Galaxy S3. When you consider the prices of the various different wireless charging items out there today, I think that’s a fantastic deal. If you ever go to sell and trade in your phone, you can easily remove the parts that you added and nobody would ever notice. The only negative thing I can conjure is that it’s dependent on obsolete parts from the PALM Pixi (or Pre) phones. That’s probably what makes it inexpensive right now; vendors are trying to clear their inventory, and as that happens the parts will likely vanish. Hopefully, by then you’ll have upgraded your phone to something newer with built-in wireless charging.

Lastly, a huge kudos and thank you to android94301 of the XDA Forums and all the people who chipped in thoughts in that thread. People like me rely and appreciate the heck out of people like you who figure these things out in the first place and share them with the rest of us!

I noticed this week on vacation that the slight bump caused by adding the wireless charging bits to the back of my phone had developed into two hairline fractures of the back of the case. Considering the very thin nature of the S3’s battery cover, I suppose this is not surprising. However, it’s pretty disappointing that I’ve run into this problem. I’m wondering if it’d be possible to lessen the effect of this bump by reinforcing the back of the battery cover with a strip of something thin and flexible like duct tape before installing the wireless charging bits in the battery cover. Of course, that’s just going to make the amount of material inside the battery cover increase and there’s a chance it’ll increase the likelihood that the cover will crack like mine did.

I wound up deciding what to do about these two cracks and I attempted to fix with a can of PlastiDip and blogged about that experience. I really liked how the PlastiDip but it turned out that the PlastiDip didn’t stick very well to the curved edges on the phone and very quickly the PlastiDip began to peel back from the phone’s back pretty quickly.

I decided it was inevitable that I’d have to replace the cover on the phone. But the question would be how to maintain the wireless charging, would I swap the bits into the new cover of the phone and risk the same problem? Or would I try something else instead? Please see my latest blog on wireless charging for the Samsung Galaxy S3 to find out what I wound up deciding.