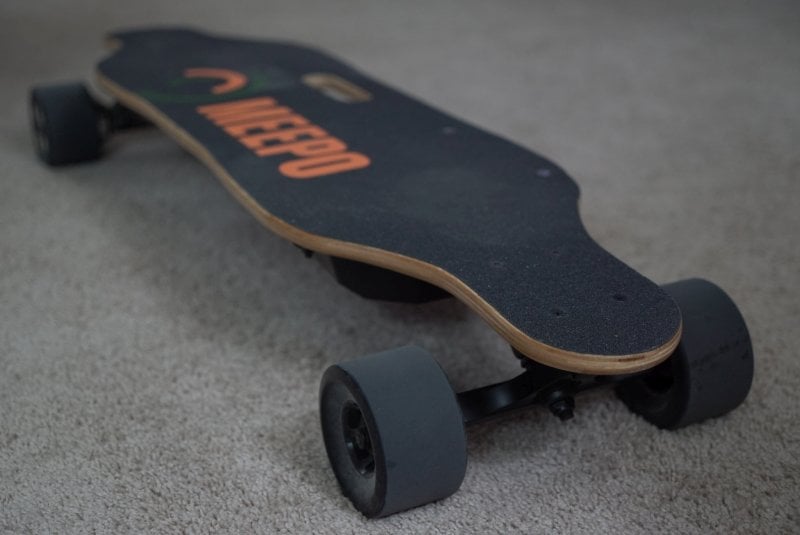 Note from Brian: Ever since my good friend, Alex, taught a dingbat like me how to build a quadcopter, I’ve been telling him that he should start up a blog and share that same knowledge and passion for teaching with the rest of the Internet. My persistence and stubbornness finally paid off when Alex bought a new toy and was finally excited enough to write a blog of his own. To try and encourage him to get started, I told him I’d publish whatever he wrote. Hopefully some day in the future, we’ll see Alex’s content hosting on his own blog. But until then, I’m honored to publish what he wants to share.

I consider myself a fairly DIY-oriented guy and with the previous endeavors of building computers, 3D printers, racing drones, and the occasional A/V rack, I felt prepared to build my own electric skateboard. Just a short four months ago, a simple Google search for a pre-built electric skateboard would return a few Kickstarter projects and the Boosted Board. At $1,500. the Boosted Board was a bit too rich for my blood, which left me to explore DIY options. Another quick search led me to DIY Electric Skateboards and I began pricing out all of the required parts. This website is a great place to get started in all aspects of the e-skate world, from just trying to familiarize yourself, to building your own complete skateboard through their guides and parts, or sourcing your own.

To build an electric skateboard you’ll need the following:

With a few extra odds and ends, you’ll end up spending $600―$1,100 to build your own electric skateboard. This again was a bit pricey for my budget-minded self. I went back to Google, and some new results had bubbled up to the top.

Kieran, aka the Creator of Meepo 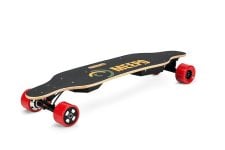 The Meepo board was one of the top results. It seemed to be everywhere, reddit, YouTube, Facebook, and about half a dozen e-skate blogs. The Meepo board had blown up. An interview with Kieran was the first result I explored to find out that Kieran used to be an employee at a budget electric skateboard manufacturing company in China, but had decided to create his own company with a more personal touch. The Meepo Facebook page still posts pictures of YOUR board before being shipped out to you, and replies to any questions or problems within the hour. The best part of the Meepo was the price: $400 shipped. This price came in under the DIY cost, and far below the boosted board and pre-built boards like it. The one downside was shipping time: for me this was 29 days. Some of the reason for this delay was the fact that Kieran himself was building the boards with three of his employees, and had a bit of a backlog of orders to fill. Most of the delay was due to his choice of shipping companies and his relatively new relationship with these services.

When I ordered my board from the Meepo website, it was the only complete board available, now known as the Meepo v1.0. This board had dual hub motors paired with a dual VESC (the speed controller), a 4.4Ah 10s battery, charger, wall mount, deck, trucks, wheels, taillight, and a 2.4GHz wireless remote. The Meepo board has a top speed of 23 MPH and a range of 11 miles depending on the slope or grade of any hills you may be riding up.

Stepping onto the Meepo for the first time brought back some slight nostalgia from my teenage years of cruising around on a traditional street skateboard. It rolls wonderfully without giving the board any power but right out of the box the trucks seemed just slightly too loose (this means the board will turn too easily). I tightened the trucks with the included tool and looked at my remote. There are three speed settings to use on the remote control: slow, medium, and really, really way too fast. They all behave differently in that the slow and medium settings have a nice smooth, maybe even gentle acceleration, but the fast setting is full torque RIGHT NOW.

I chose the slow mode for starters and wow, that feeling of being pushed forward by the skateboard itself is something that everyone should try at least once. The maximum speed on slow mode is about 6 mph, medium is about 15 mph, and of course fast is top speed capped at 23mph. With slow mode enabled, I pushed the throttle to full and the board eased around the parking lot. Six mph is roughly double a normal walking speed, so it was a nice, gentle introduction to the electric-skateboarding world.

After I got my bearings, I decided to pick up the board with the nicely placed handle and move to some paved bike trails. Slow mode was fun, but I decided that it was time to bump it up a notch to medium speed. The behavior of the board remained the same, but it just kept getting faster and faster until I was riding at the full 15 mph. At first I felt a bit uneasy about the speed I was traveling down the bike path. There were no handles to balance myself as I would on a bike or scooter, and finding my center of gravity, whether I should lean forward or back, was something else I was rather unsure of. I slowly got my bearings and was able to relax and lean into my turns a bit more. It really did start to bring back the feeling of snowboarding down the slopes of Michigan again. 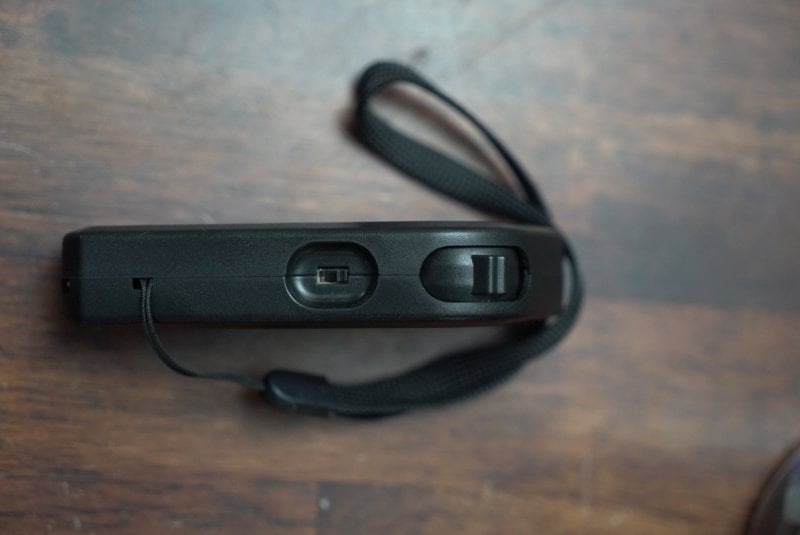 I’ve had the Meepo board for about two months now. Every part of the board is still in perfect condition even after a few mishaps. The polyurethane wheels and tires on the hub motors has held up perfectly and the battery is still performing as well as it did right out of the box. The board will automatically power on when rolled in any direction, which is handier than you’d think. Not having to pick up the board and press the power button after unloading it onto the sidewalk is a nice touch. The construction of the Meepo is also top-notch. In speaking with Kieran over Facebook chat, he informed me that the control board (known as a VESC) has been sprayed with a water-resistant coating to help with slight splashes from a small puddle or something of that nature. The polyurethane was also upgraded shortly before I had purchased my board, and the wireless remote was improved to add the medium speed settings. Being able to talk to the creator of the company as a normal customer and seeing how he is constantly improving his product through customer interaction just makes the experience of acquiring an electric skateboard so much better.

On the Meepo board website, all spare parts are available. From batteries, wheels, remotes, decks, and hub motors, Kieran keeps stock of anything that might need to be replaced. The option to purchase your board with a larger battery is also available, albeit at a substantially higher price. These spare parts are shipped from China, so expect the usual two- to three-week total wait time and order ahead if you think you may need a replacement part. There are also videos of Kieran swapping out batteries in about three minutes with the included skate tool if that is of interest to you. 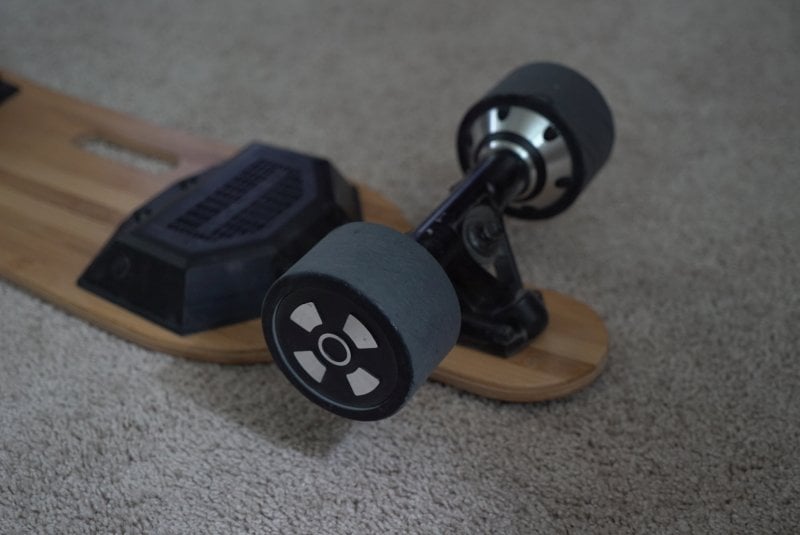 I really don’t have much to say here from a functional standpoint. The downsides of the Meepo board really come down to comfort. Traditionally, skateboards have a concave shape to the deck. This allows your heels and toes to rest on the deck at all times and makes steering and cruising a breeze. The Meepo board unfortunately has a convex shape that makes riding the board akin to balancing on a thin bar rather than a nice, wide longboard. I experienced some slight pain in the arches of my feet after about 15 minutes of riding. I believe this is because the convex shape of the board makes it harder to steer. Your really have to lean into your turn and press on the ball or heel of your feet to carve. This should be an easy, almost subconscious action on a standard concave longboard deck. This problem is evidenced by the community of Meepo board riders performing “deck swaps,” where they buy an aftermarket standard longboard deck and move the electric skateboard components to the new deck to regain the nice feeling of riding a true longboard.

Since acquiring the Meepo board and writing this review, Kieran has upgraded the Meepo board to version 1.5. This new board comes with a more concave deck and a stronger battery to address problems stated from the community about the version 1.0 board. 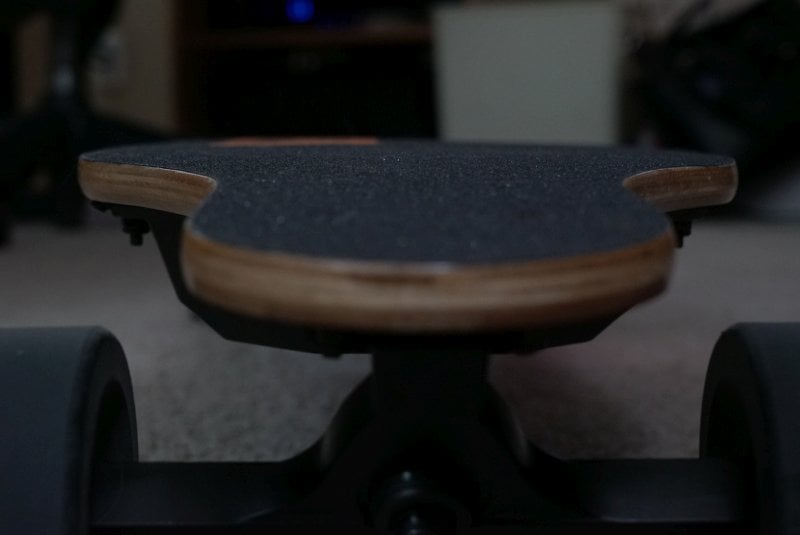 The Meepo board has been a wonderful first electric skateboard. The price is a perfect place to enter the hobby and still have a reliable skateboard to cruise around on whether you are getting groceries from down the street, or just enjoying a nice day cruising around the local park. The customer service and ever-improving product line really shines when dealing with Meepo. This is a budget skateboard, but you get substantially more than what you pay for. I would recommend this board for someone who is just getting into electric skateboarding or for a budget-minded person like myself. I will update this review as time goes on to speak for the longevity of the board, as the community has stated that the hub motors do have a shorter lifespan than your average belt-driven system.

Alex Courville is a DIY enthusiast. Originally from northern Michigan, he now lives in Dallas, TX, where he has convinced five grown-ass men to become addicted to building DIY racing quadcopters. Don’t worry, they don’t actually race the drones, unless the finish line of the race is to hit the ground, trees, or any solid object as fast as possible. They do that well. Anyways, Alex enjoys beer, riding electric skateboards, and traveling, as long as it’s outside of Texas. 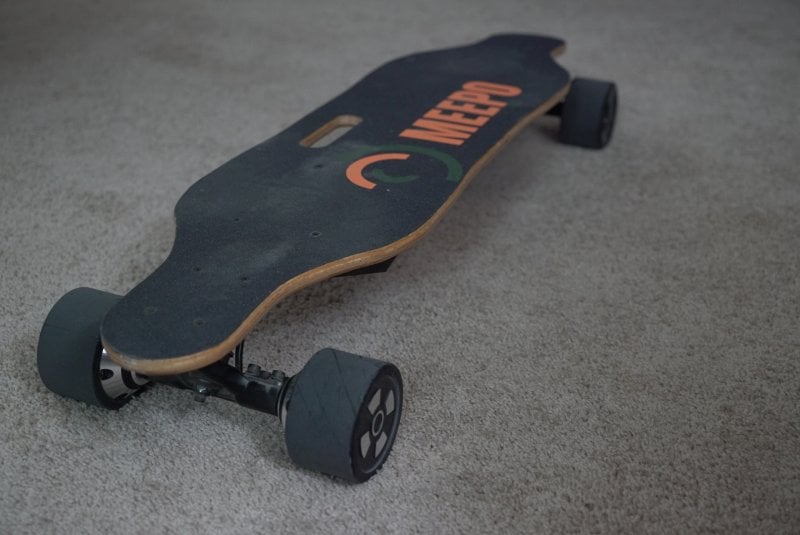