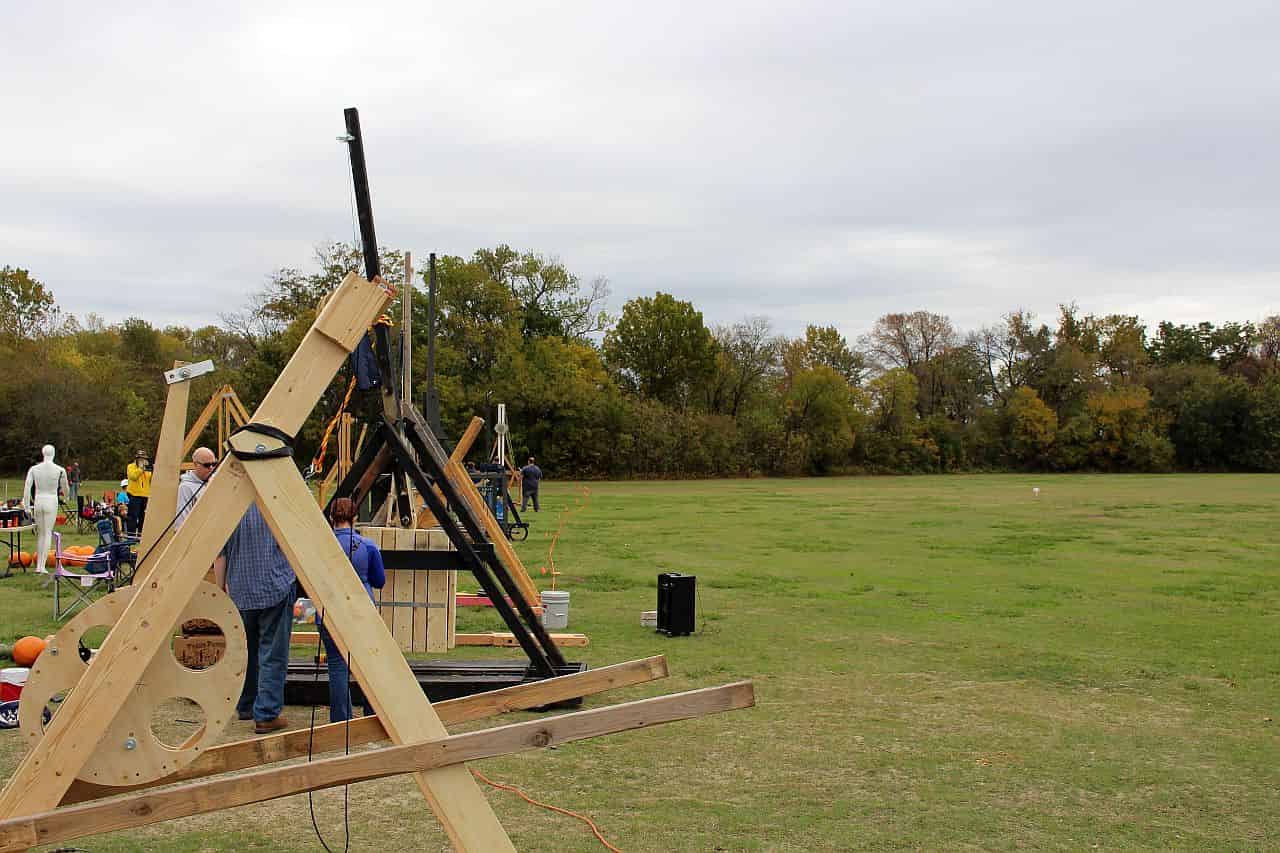 When I first joined the Plano-area makerspace, TheLab.ms, there were a number of programs I was interested in. There seemed to be no end to the amount of creative endeavors the other members were into: homebrewing, information security, wearable electronics, etc.. But one of the programs that really got my attention was presented by a subset of trebuchet aficionados within TheLab.ms. This contingent of designed, built, and fired their own medieval siege weaponry as a hobby.

Better than that? They put together an annual event called SlingFest to showcase and compete amongst each other. A video from the 2014 SlingFest cemented it for me—I’d be attending SlingFest in 2015, especially since it was happening practically in my backyard at Oak Point Park & Nature Preserve where I’d previously attended the Plano Balloon Festival. 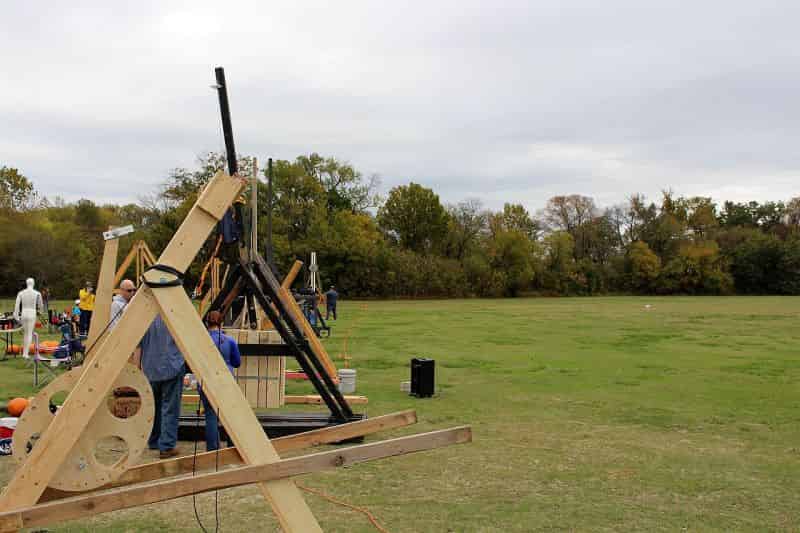 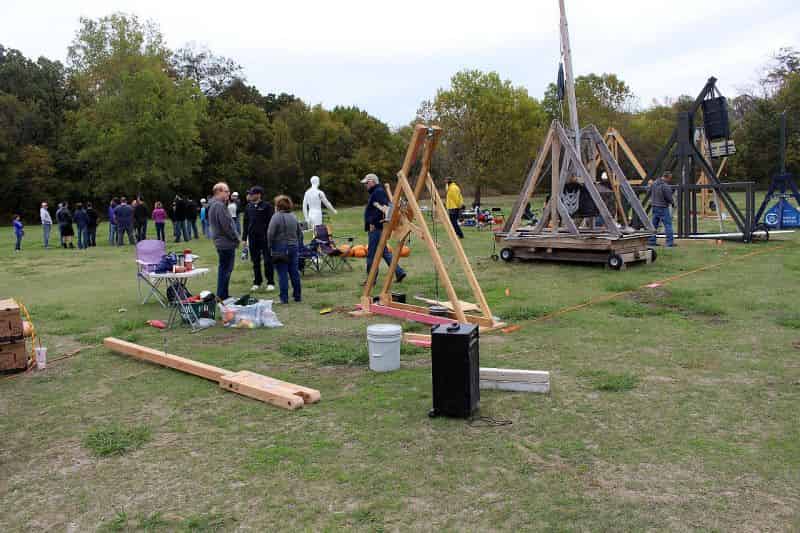 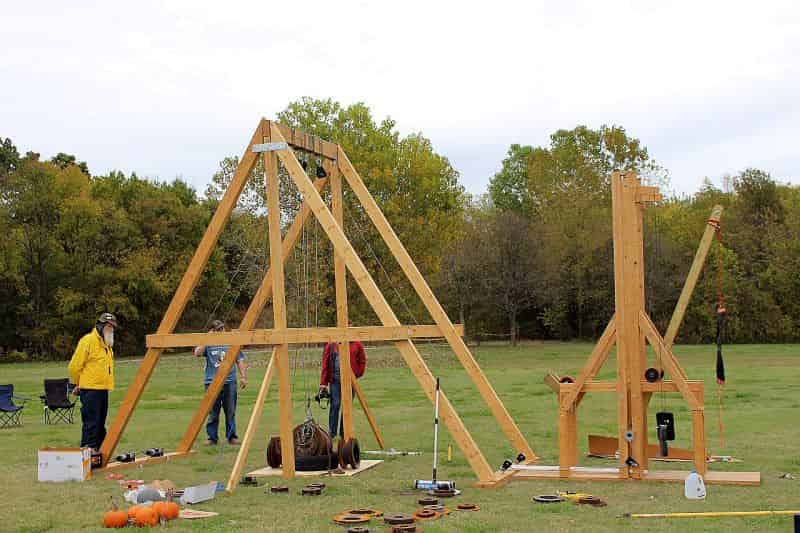 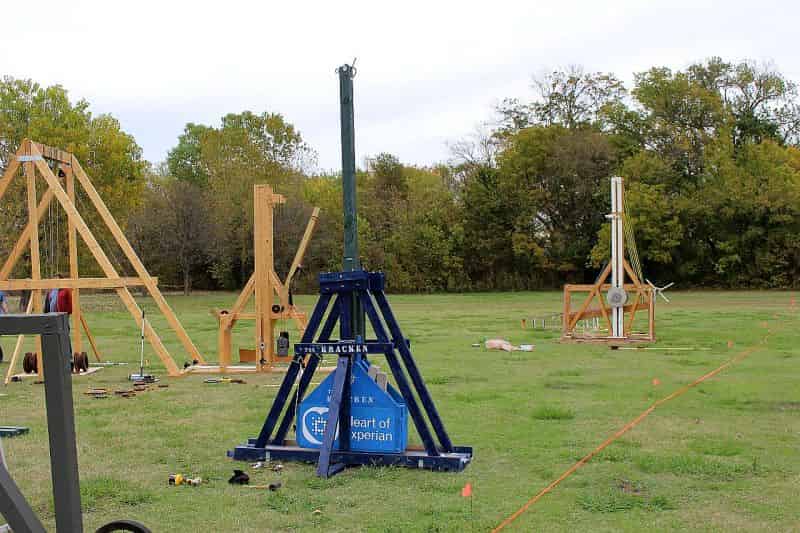 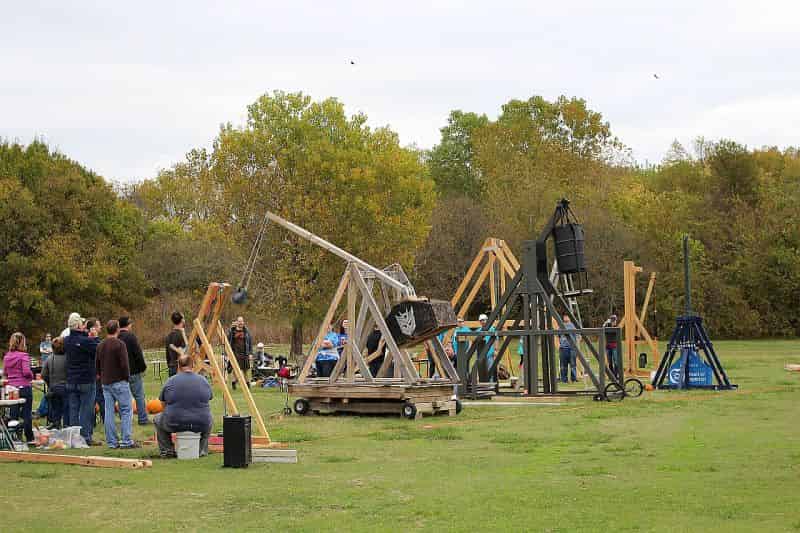 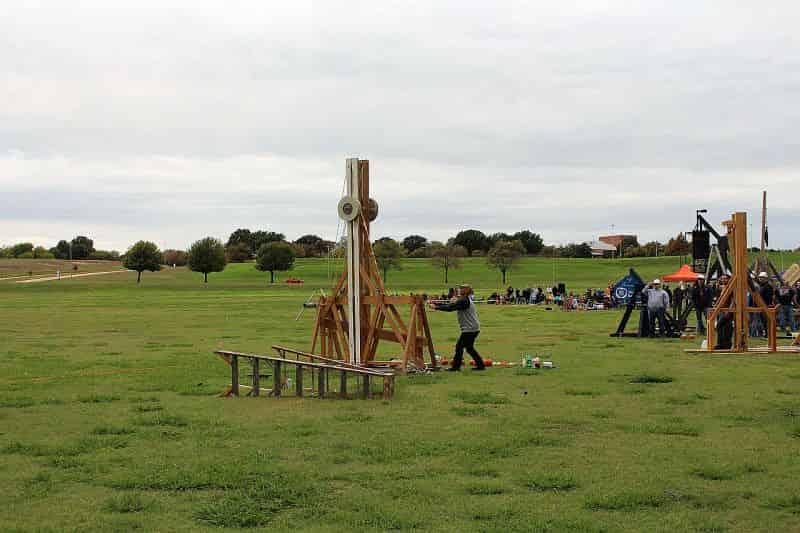 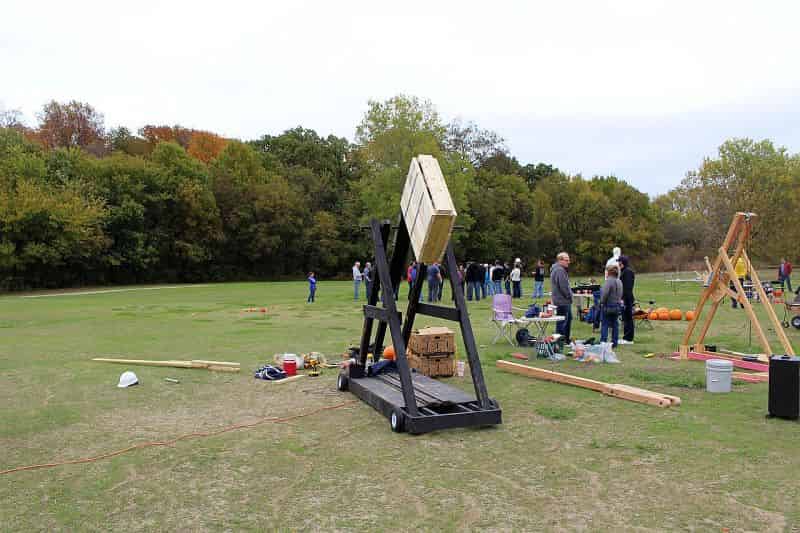 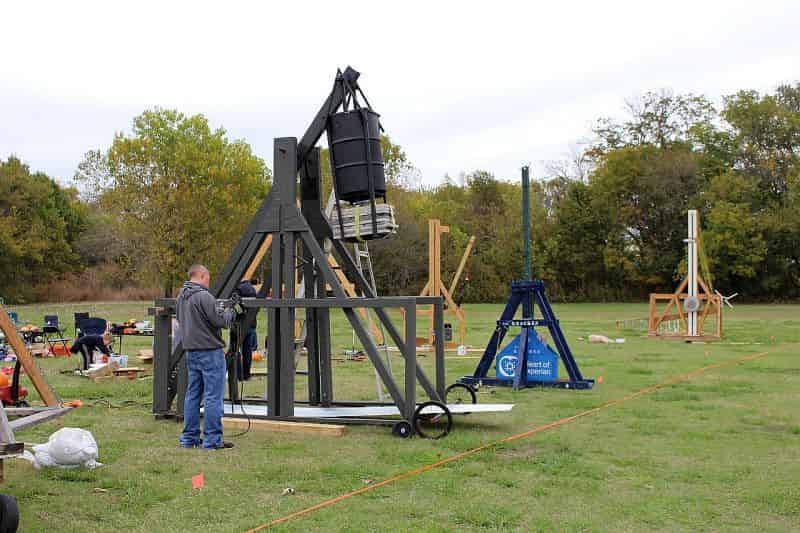 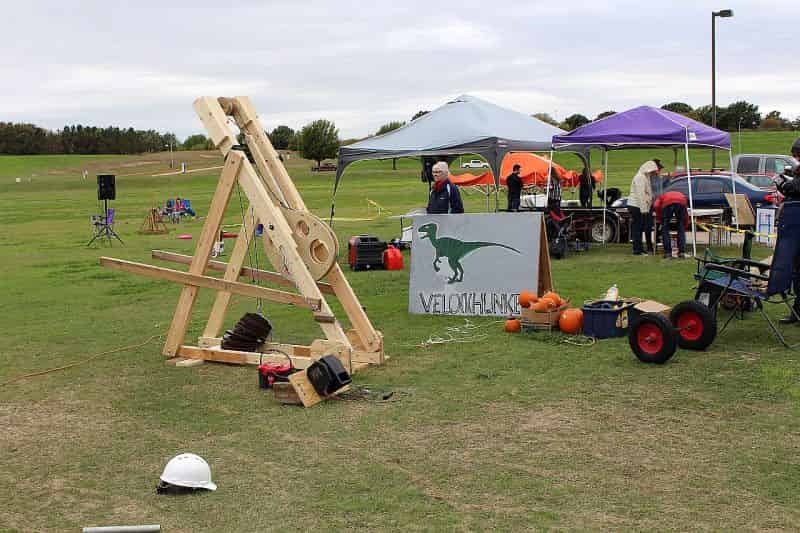 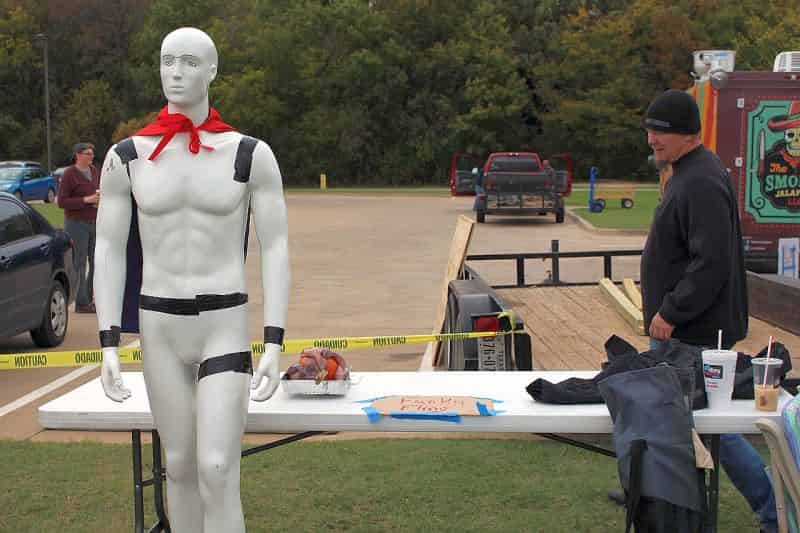 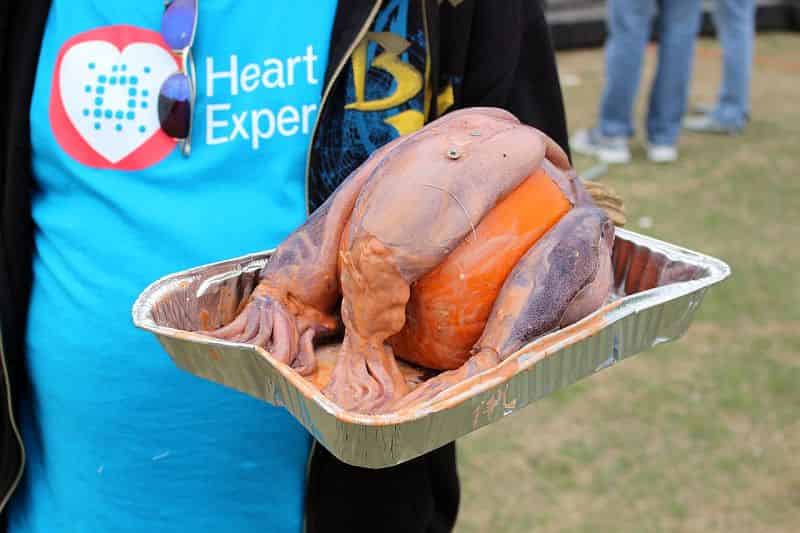 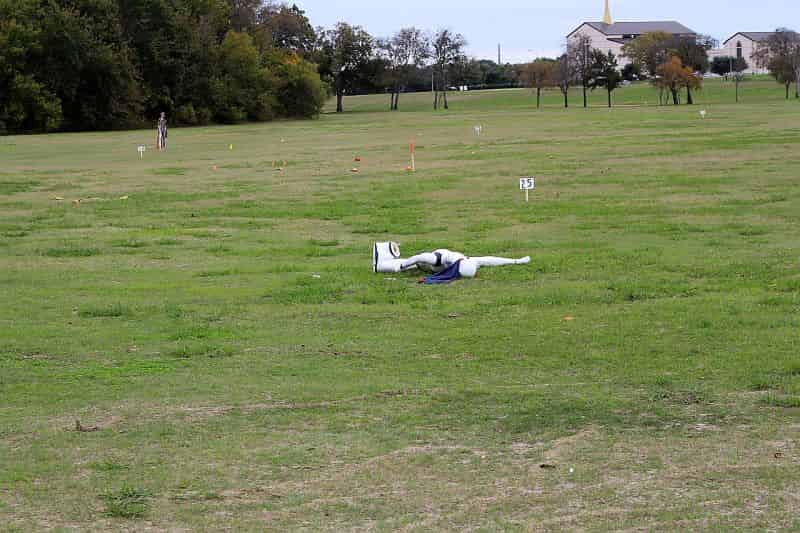 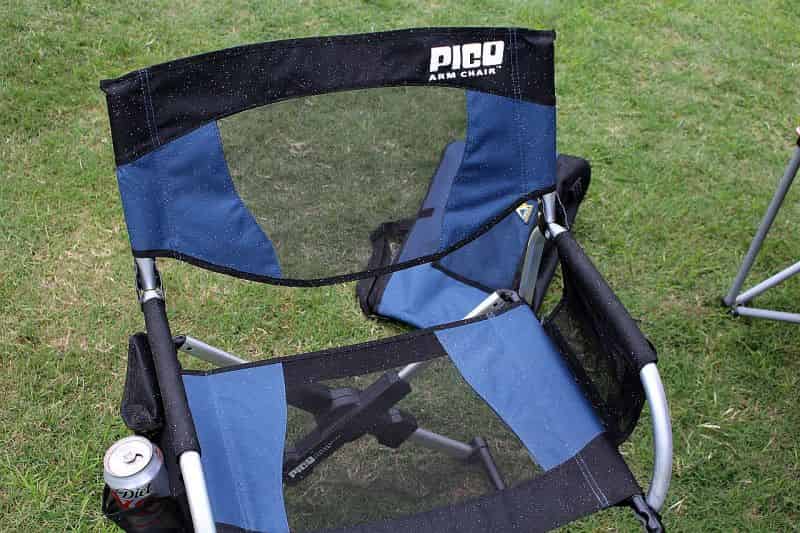 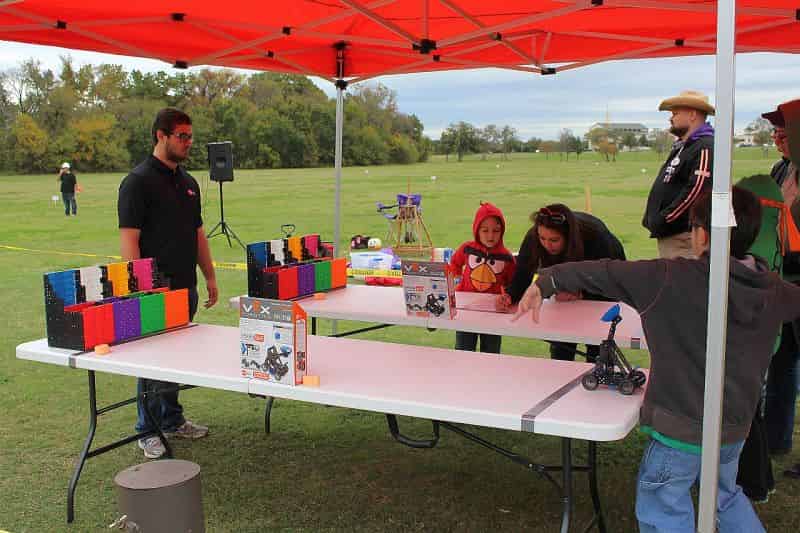 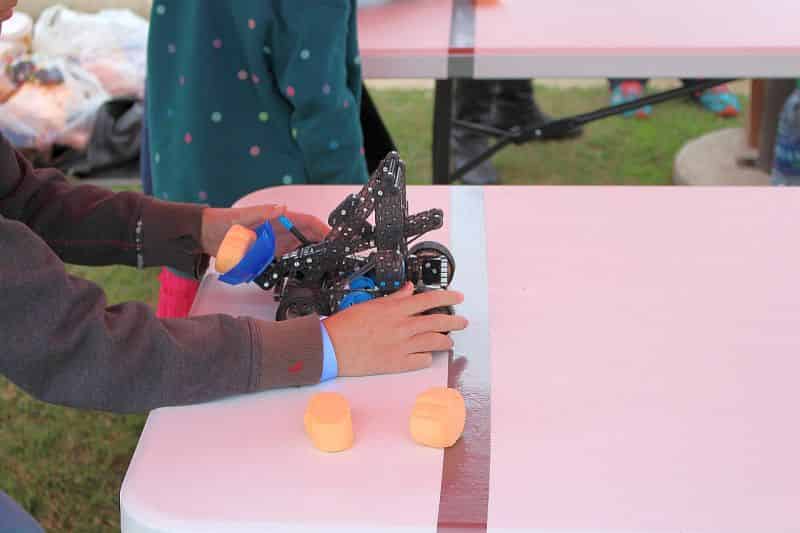 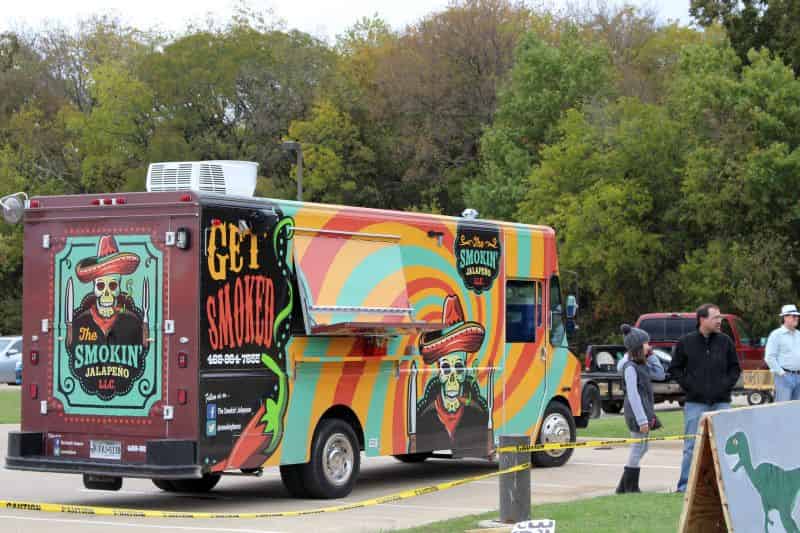 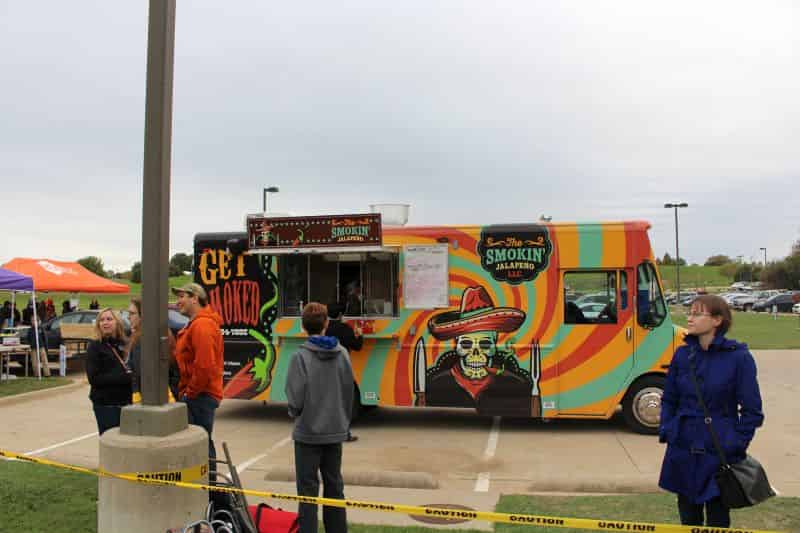 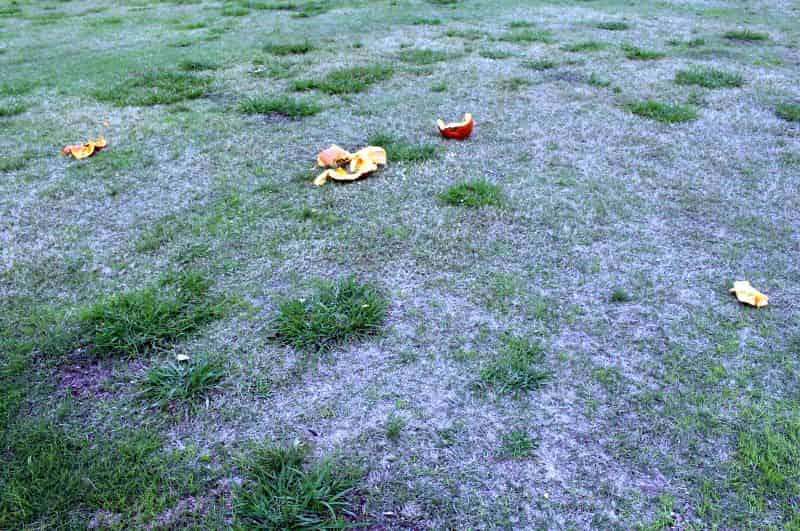 SlingFest was broken up into three primary competitions:

Accuracy: Each team placed a marker out in the field and then fired their trebuchet. The distance between the target and where their projectile landed was recorded and added up across three shots, with the lowest score winning.

Funky Fling: The funky fling was by far my favorite competition of the event. Each team thought of creative things to load onto their trebuchets and then flung them out onto the field. The Kracken team attached a fresh squid to a pumpkin and launched it with horrifying success—the force caused the squid to be ripped apart and flung across the field, I believe I even saw some of it land amongst the competitors. TheLab.ms’ own entry, SlingKong, decided to hollow out a pumpkin, cram it full it with powdered sugar and fling it — it was delicious! The winners of the event, team Old School Trebuchet, were picked by the crowd for launching a mannequin draped in a Superman cape with a horrific limb-removing landing.

Distance: Each team was given three attempts and the longest throw of all won this event. It was interesting standing amongst the trebuchets as the teams loaded them down with extra weight. The amount of creaking and groaning that came from the trebuchets had me both excited and a little terrified.

SlingFest was even kid-friendly with two “baby” trebuchets launching potatoes and golf balls, the latter of which fired at such a velocity that I had an impossible time trying to record any video for it. However, I did manage to film the launching of a potato or two.

In addition, there was a tent from the company HexBug which contained their Hexbug Kids VEX Catapult kit for the kids at the event to play with. They got to set up and fire the pumpkin-shaped marshmallows at targets. Each competitor received a score, and I believe a few lucky kids even won those catapult kits and are hopefully playing with them as I write this blog.

Lastly, The Smokin’ Jalapeno food truck came out to SlingFest and served up some food. Personally, I enjoyed the heck out of my brisket tacos, and judging by the constant line of people I saw at the food truck, I wasn’t the only one enjoying the food.

Pretending to be a journalist, I attempted to take pictures and video of everybody at SlingFest 2015. Because I’m a terrible journalist, some of those videos and photos didn’t come out too well. For a better experience, I suggest you start keeping an eye out for SlingFest 2016 and come see it in person! Here’s a rundown of each team competing in SlingFest 2015 with the names of their trebuchets in parentheses. Much of this information was gleaned from the SlingFest flyer as well as from what was announced at the event. If there’s anything incorrect or missing, then let me know and I’ll get this updated!

SlingKong was TheLab.ms’ entry to SlingFest, and as the title sponsor, they earned no benefit of the doubt from the field marshal. This is the team that I wound up spending most of my time around during the event, since Pat was an official team member. SlingKong is considered a traditional trebuchet whose prior claim to fame has been that it generated so much torque it cracked its arm in the 2014 competition. This year the team captain (and pretty much one-man band) engineered a new arm that was so strong and covered so much square footage that they ran out of spray paint covering it!

A few sling issues had SlingKong primarily firing in a backwards direction. In fact, for the accuracy contest it was suggested that he even be rotated 180 degrees! However, one of the biggest cheers from both the competitors and the audience was heard when SlingKong fired in a forward direction! Additionally, SlingKong had by far the best-tasting funky fling as they launched a pumpkin packed full of several bags of powdered sugar. Everyone downwind of the trebuchet and the pumpkin’s trajectory got a slight dusting in powdered sugar—it was delicious.

The KRAKEN is a trebuchet I’ve had the pleasure of seeing come to life over the past few months. The team captain, Richard, is also TheLab.ms’ brewmaster and the driving force behind the Brew of the Month program. Because each brew event has taken place at his house, I’ve been able to see the KRAKEN slowly being assembled. While they wound up a few trebuchets down from where I was sitting, the smell from their funky fling draped the field in its aroma. I’d really wanted to get their funky fling on video, but I missed the signal that they were firing. However, that poor squid was torn asunder by the forces of the spinning pumpkin; bits of squid stench were strewn all over the battlefield. I have sympathy for the team member or volunteer who cleaned that up!

Texas Trebuchet (Not So Little Monster)

Not So Little Monster is a floating arm trebuchet that stands about 13 feet tall. It was one of two trebuchets at SlingFest whose arms are moving so fast they sounded much like a bullwhip moving through the air. Team Texas Trebuchet brought it all the way up to Plano from Houston and performed quite well. In addition, Not So Little Monster is a very-much scaled up version of the golf ball trebuchet that kids were getting a chance to fire.

Velocichunker is a modified MURLIN (multi-radius linear nodes) trebuchet and as I understand a new entry to SlingFest. I especially liked their team sign. Prior to SlingFest and seeing Velocichunker, I’d never seen this type of trebuchet before. I feel a bit guilty because I think the one video I captured of Team Velocichunker happened to be on a couple of their less-than-impressive throws. I spent a bunch of my time assisting with SlingKong who was right next to Velocichunker, so I missed a bunch of their throws. They did however attempt to fling a pumpkin wrapped in what looks to be a basketbal hoop’s net; it went pretty high but not pretty far!

Team Trey Bouchet also brought a MURLIN-style trebuchet, Fibonacci’s Apprentice. As this trebuchet’s arm moved through the air, it sizzled much like a bullwhip. The velocity of the arm moving and the projectile being flung from the sling caused me to lose my calm journalistic demeanor and exclaim “Jiminy Christmas!” It’s my understanding that Fibonacci’s Apprentice is the baby brother of a much larger trebuchet, Trebzilla, who suffered at the hands of a cruel road trip to Route 66 Pumpkin Chunkin and was not repaired in time for SlingFest 2015.

Paul Sanders brought his trebuchet, SNS, all the way from Lavaca, Arkansas, turning SlingFest into an intra-state competition. Not much was written in the SlingFest materials about this trebuchet on account of his late entry to the competition. However, I was at the field when they rolled in from Arkansas with SNS on a trailer; it was an impressive sight. My favorite SNS highlight was a slightly problematic trigger on one throw that caused a brief bit of micro-consternation and the subsequent humorous recovery.

Frankenchet, from Manly Team Delta Thunder Explosion Squad, was my personal favorite from SlingFest. As its trebuchet type, they listed it as a “floating arm nightmare” which seemed to be quite the apt description. It is a massive, complicated-appearing machine. It is a two-time returning champion whose counter-weight is built around a rusted-out engine block. Watching Frankenchet hurl objects through the Sunday afternoon was exciting, and at the end of my video you can hear me say “Wow!”

If you didn’t make it out to SlingFest 2015 then you really did miss out on a good time. The eight competitors each built really impressive machines, whether they were big or small and whether they fired forward or backwards. Each of the teams were proud of what they built and were gracious when interacting with the audience. Beyond gawking at the trebuchets and being entertained by their feats of strength, there were enough kid-centric activities to do. If you got hungry, there was The Smokin’ Jalapeno food truck serving up

And lastly, kudos to TheLab.ms for being the driving force behind this year’s SlingFest as a title sponsor. The entire organization really got behind SlingFest and turned it into the great event that it turned out to be. Hopefully they can use this year’s success and build an even bigger event for 2016. I’m already looking forward to it!