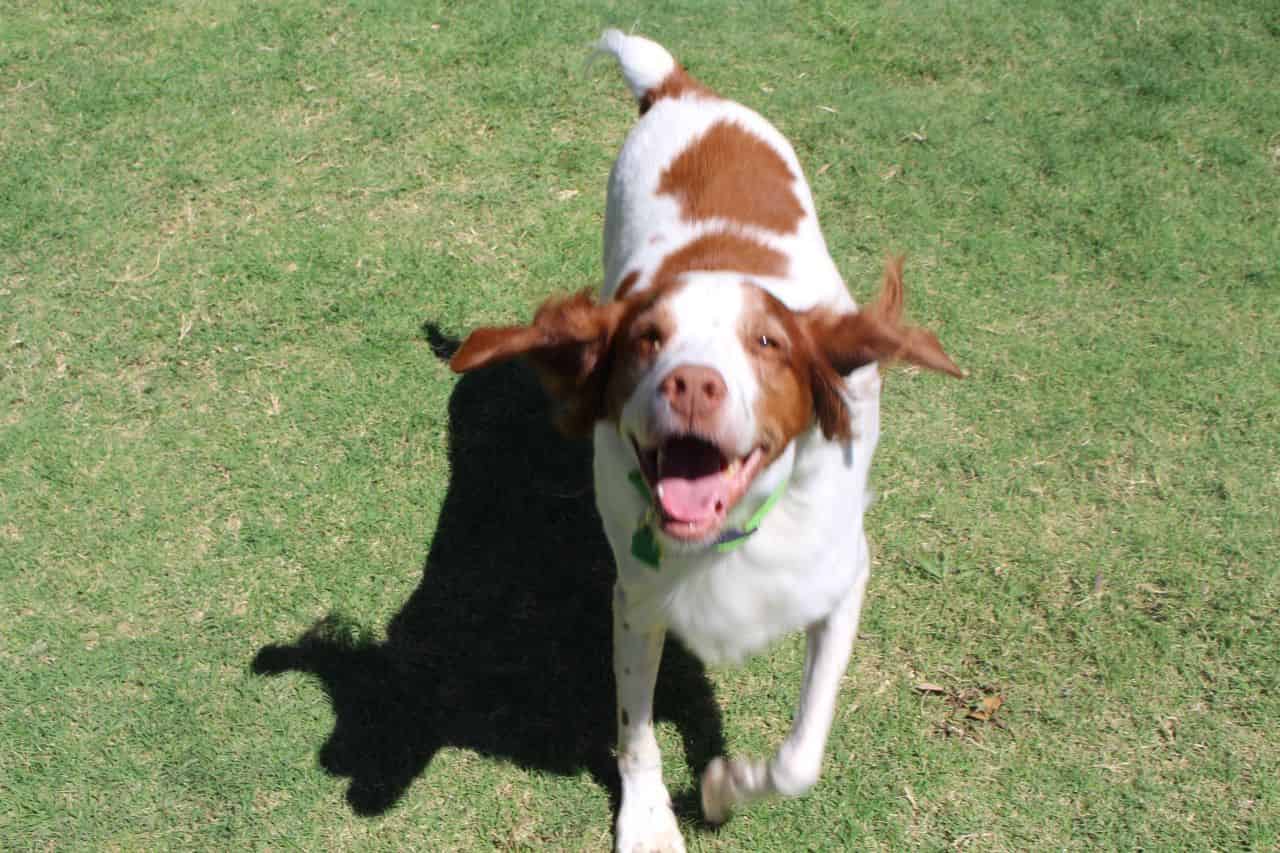 Update (10/10/2015): Today is Jed’s birthday, his eighth, and for his birthday he got the best gift he could be given — a forever home! As I type this update, he’s in the B.R.I.T.-mobile headed further south into Texas to join his new family. Happy trails, Jed, you’re a lucky guy!

As I mentioned in a previous blog, we’ve been on a bit of a hot streak with our foster dogs recently from Brittany Rescue in Texas. Our past three foster puppies Sunshine, Emily, and Pardner all wound up finding their forever homes quickly. In Emily’s case, just after a few minutes! I’ve been frantically working on this blog about our newest foster dog, Jed, as soon as possible because I’ve got a feeling that he’s headed to his forever home shortly!

When we found out that our next foster dog was named Jed, I immediately started humming this song aand hence the title of this blog. I remember during summer break, we’d occasionally watch the Beverly Hillbillies reruns in syndication and from what I remember of J.D. “Jed” Clampett, a few of his traits are present in Jed the Brittany. Especially loyalty and a calm demeanor!

Jed is an eight-year-old Brittany, he’s neutered and he’s probably a bit on the heavy side. When we picked him up from BRiT we were told he weighed 47 pounds. However, Crockett is around 45 pounds and he’s quite a bit smaller than Jed. Jed’s got a bigger frame than Crockett does and Jed’s is a bit more filled out than Crockett too!

Unlike our other two Brittanys, Crockett and Zoe, Jed is low-key. If I could describe Jed in a single word, I think that “mellow” is the best adjective that comes to mind. Compared to Zoe, he’s practically catatonic. However, our little Zoe’s probably on the high-energy end of the spectrum — she’s frenetic.

When the time is right, Jed likes to curl up and lay down in front of us or near us and just relax. I came home from work the other day, exhausted and irritated after my commute home and I laid down on the bed to take a quick little nap to recharge my battery for the evening’s activity. I had been on the bed all of 3 seconds when I felt Jed gently jump on the bed and curl up right next to me and join my restful state. 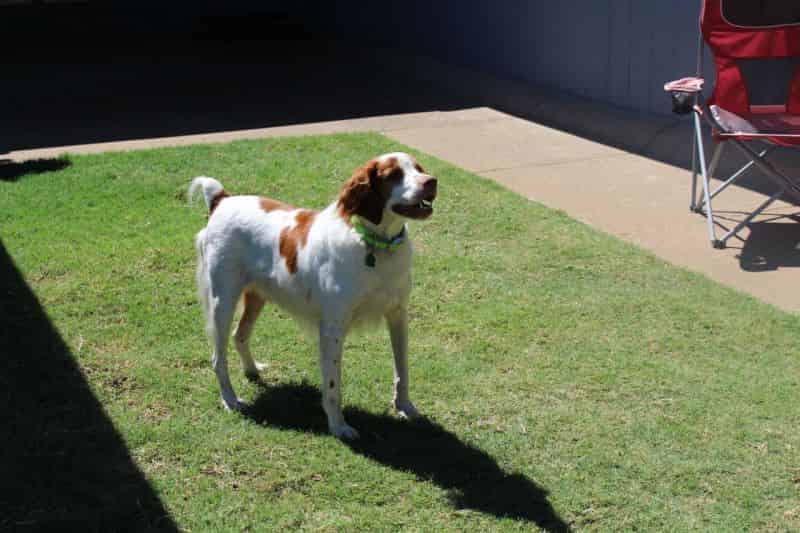 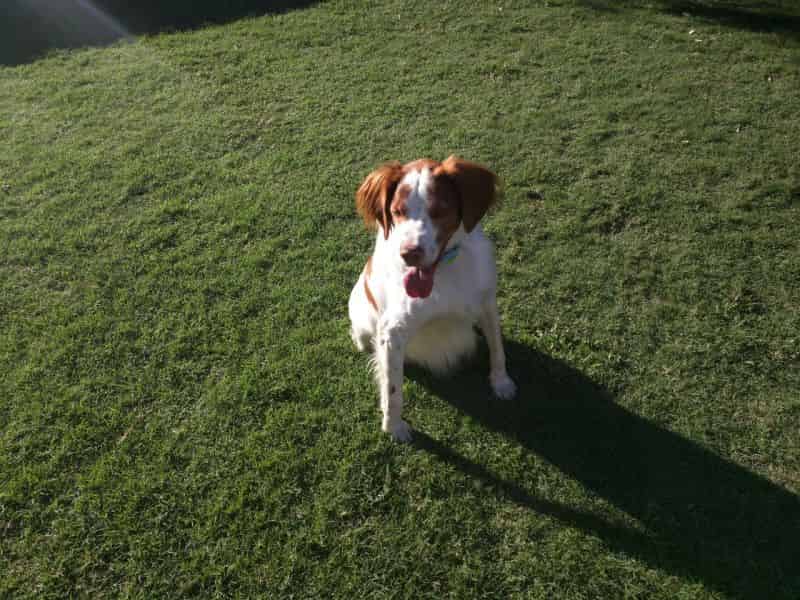 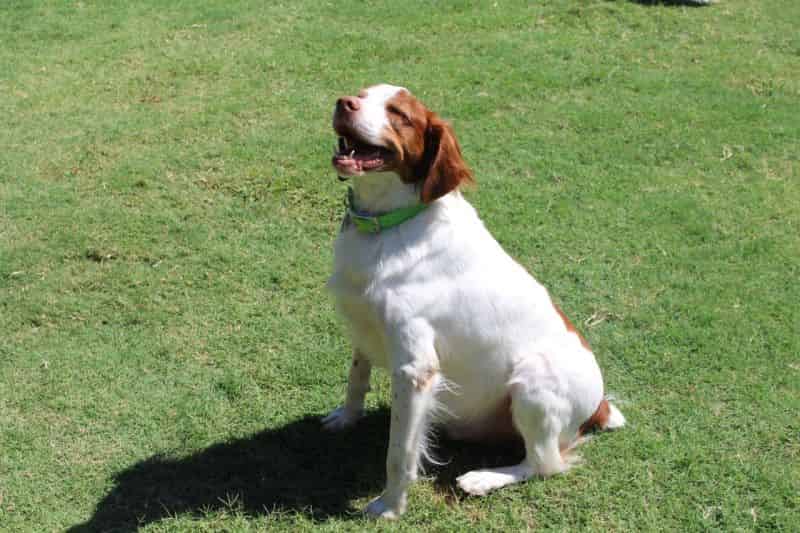 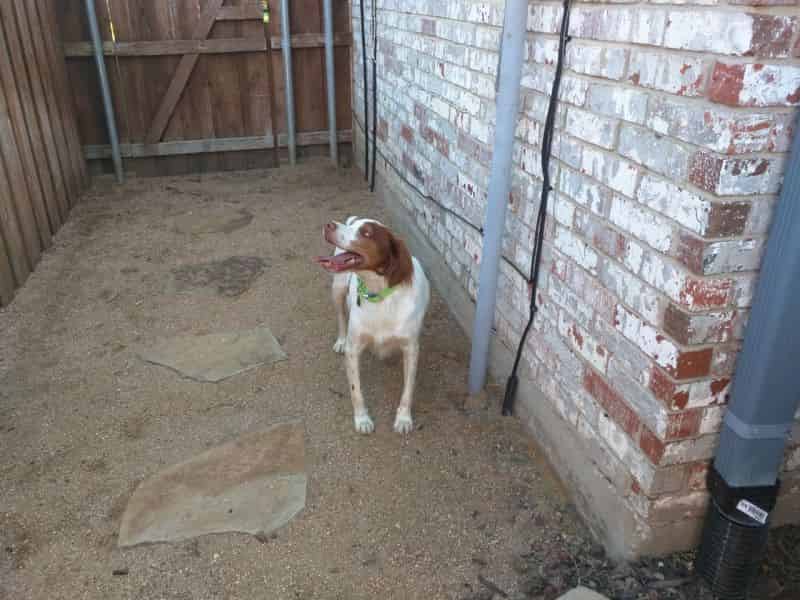 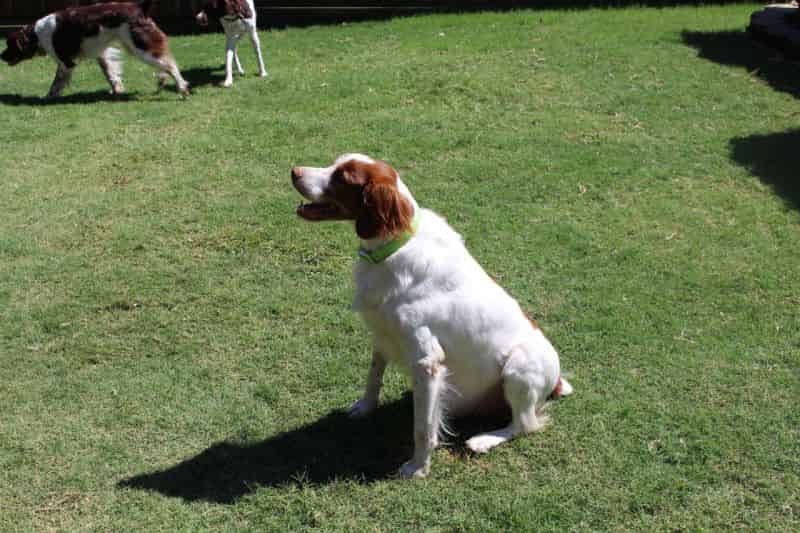 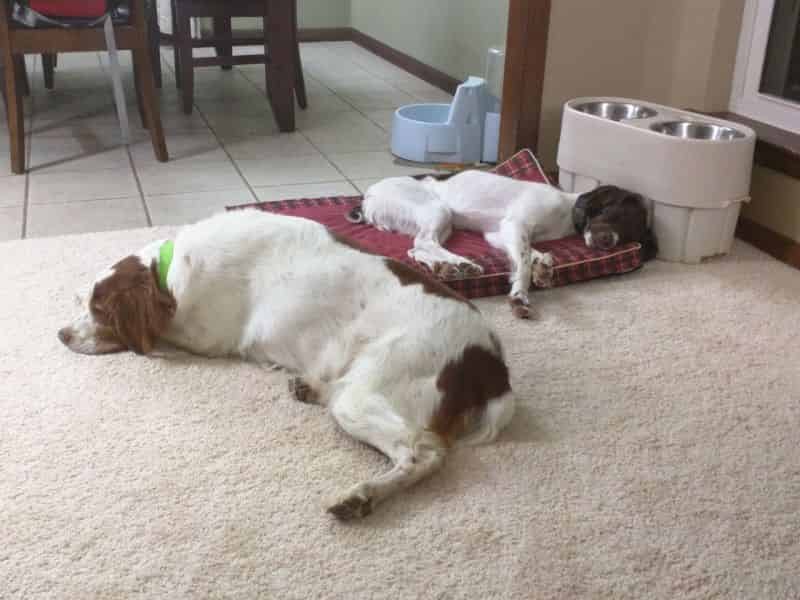 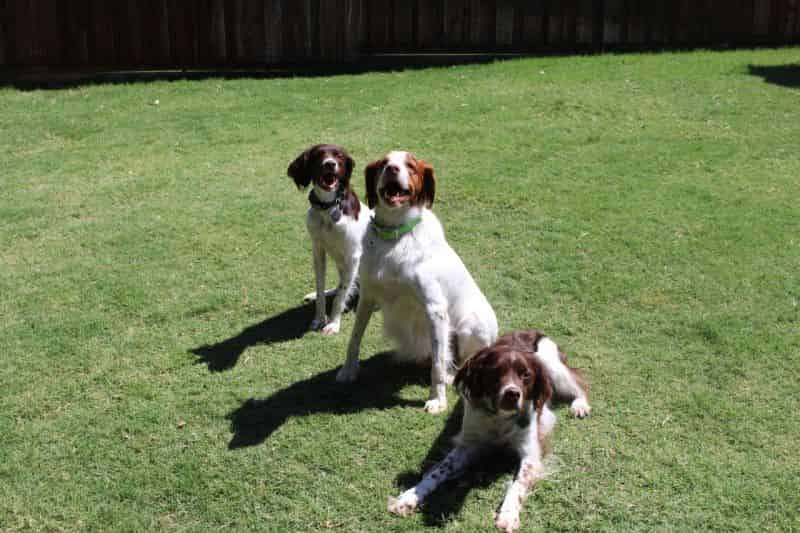 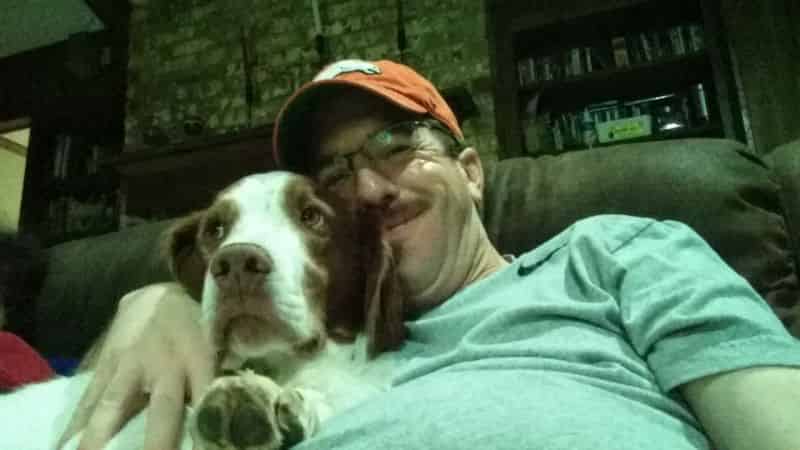 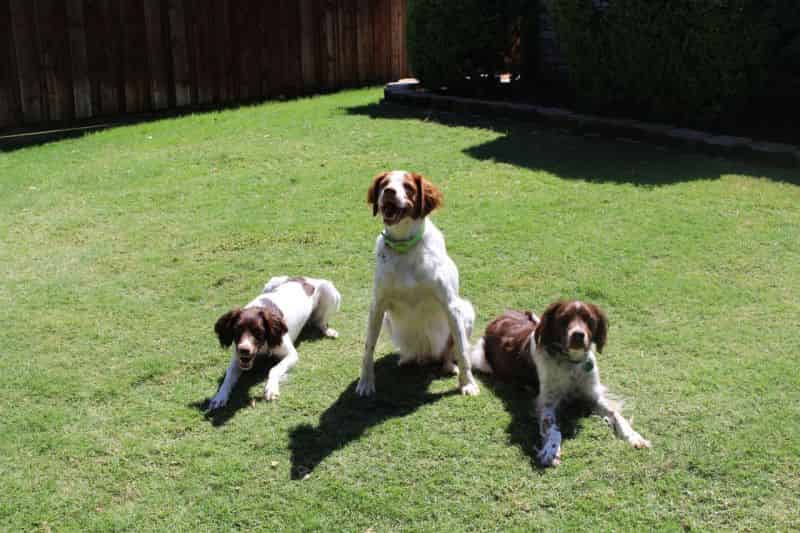 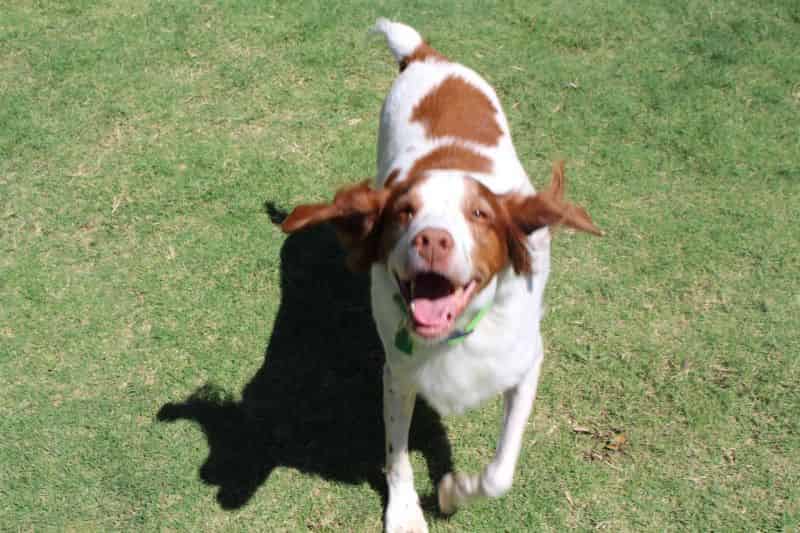 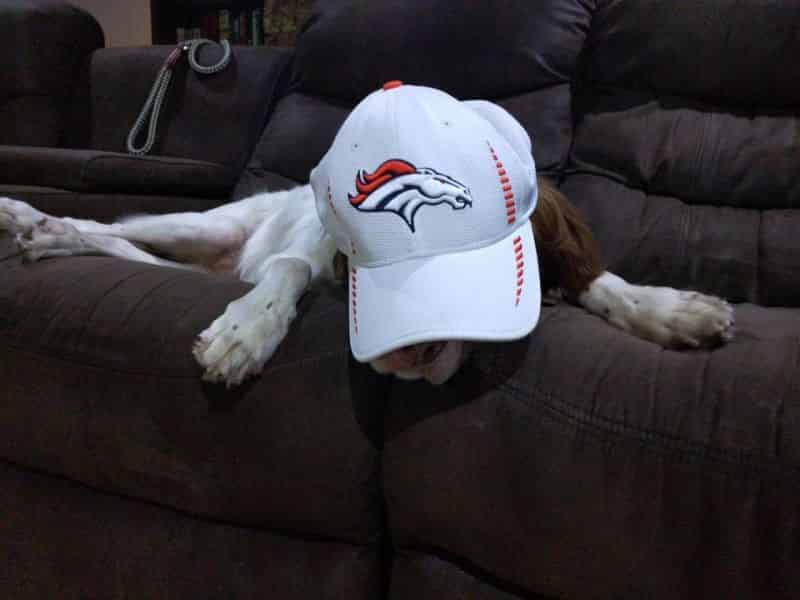 Normally we’ve found that the excitement of unfamiliar places and perhaps a lack of indoor manners have led to a few indoor accidents with our other foster dogs, especially Marley and Pardner. However in Jed’s case, he’s not had a single accident inside. In my opinion, I’d say Jed’s completely house trained.

Jed seems to have some basic obedience training. When outside in the backyard, he’ll come when called and if he’s being oblivious it’s not difficult to get his attention and get him to come to you anyways. In working with some of the standard dog obedience commands, he seems to understand both “sit” and “down” pretty well. And when on a leash, he’s been pretty complacent. Considering his larger size, I halfway anticipated that Jed would attempt to pull his handler around by the leash, but so far that’s not been the case. Jed also didn’t seem to have any issues staying in a kennel both overnight and while we’re away at work. Finally, we also didn’t have any reservations about letting Jed stay out of his kennel overnight on special occasions.

If Jed is laid back, he’s certainly not lazy. He gets real excited when either Julia or myself come home, he’s quite vocal about barking at the neighbor’s dachshund whose owner lets him out to relieve himself in our yard, and he likes to play with our other two dogs. Jed certainly seems to have that high-energy Brittany spirit within him; perhaps his age and previous activity level have just taught him how to have a better on/off switch than most dogs. I think Jed would benefit from being a bit more active and I certainly think he has the motor and the spirit to do it.

All that being said, I’d recommend that both Jed and his new owner take some fundamental dog obedience lessons in order to get on the same page. Ultimately, that’s my recommendation for anyone adding a dog to their household even when the dog is as well behaved as Jed has been.

It’s our understanding that Jed’s prior home had quite a bit more backyard and front yard than we did. At first we were a little concerned that Jed was used to running around an patrolling a large backyard with most of his time and that he’d need some time adjusting to being an inside dog with much less property to be responsible for. However, what we’ve found is that if Jed is more comfortable outside, then he is every bit as comfortable inside with us. His indoor manners are fantastic, he doesn’t jump up on furniture without being invited. He will put his forelegs on the couch and stand up to get closer to you. When invited, he’ll jump right up on that couch and snuggle right next to or in between whoever is currently on the couch.

Just like each of our foster dogs before him, Jed is a fantastic dog and would make a great addition to the right home. Are you that home? I certainly hope so! If you’re interested in Jed, your best bet is to first check out Jed’s page on the BRiT website and then go fill out the BRiT adoption application. On top of that, please feel free to use the comments below to ask any questions you might have about Jed and I’ll answer them as best that I can in a quick fashion.