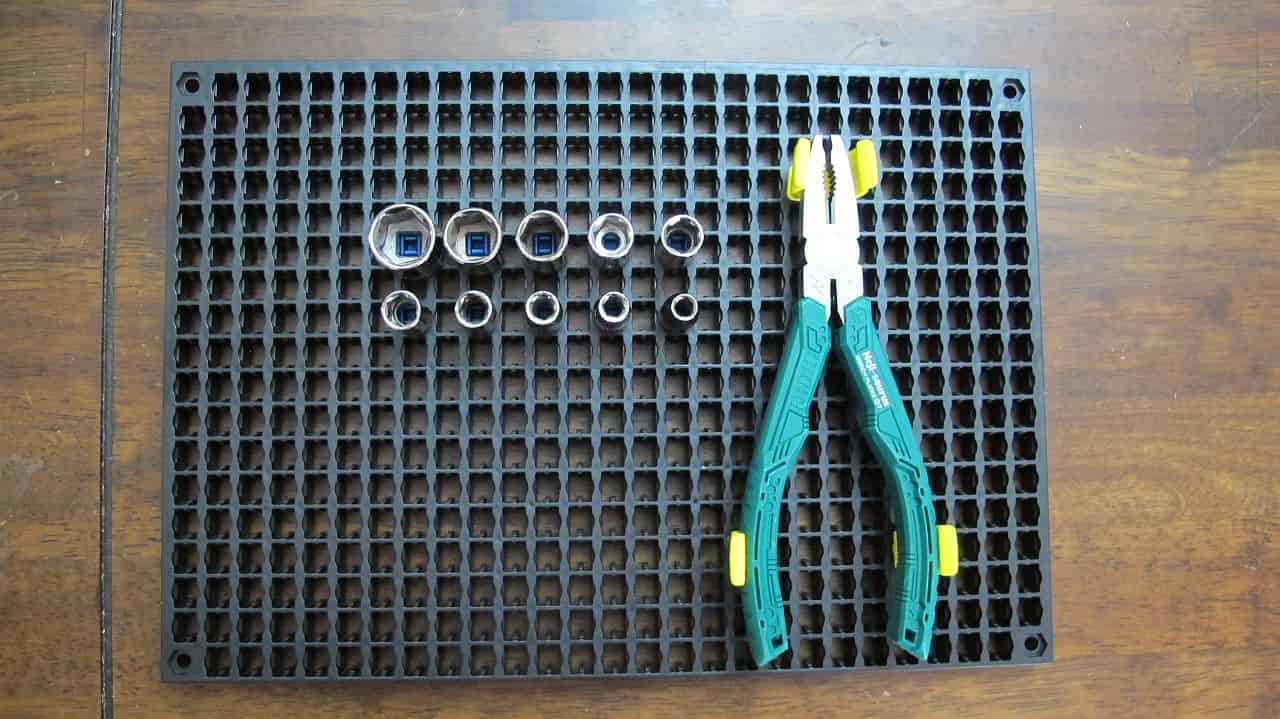 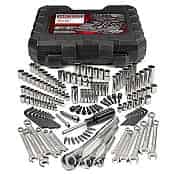 Upon embarking on my Garage Makeover project after buying our first home, I realized what a sad state of affairs my set of tools was. Most of my tools were stuff I’d used in upgrading my computer or building a DIY NAS server and pretty purpose-specific. I’d also collected a ragtag collection of cheap wrenches and sockets but I didn’t really have anything that was very complete, and because of that I was almost always looking for a socket or wrench that I didn’t have. I decided to quit being so cheap and to buy an actual tool set which would cover the majority of what I think I’d need it for and I picked a Craftsman 154 piece Mechanic’s Tool Set.

The new tool set led to me having an abundance (and many redundant) set of tools which caused a second problem: I had nowhere to keep them. To rectify that I wound up picking out a Craftsman top chest and bottom chest to house my miscellaneous tools. 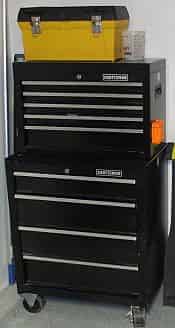 What I soon found out was that my sockets and wrenches were a complete and total mess inside my new toolbox. Even though I had them in a nice tool chest, the drawers themselves were utter chaos and impossible to locate the tools that I needed. In fact, for the longest time my new tool set simply sat on the garage floor because it was a superior choice when compared to the insane drawers in my tool chests.

I started digging around the Internet for some clever ways to organize your tool chest, specifically focused on managing my glut of sockets. A couple of the DIY socket organizers intrigued me, especially since I have a good friend with a 3D printer. I found A Better Socket Organizer over on Instrucables and gave it (and others like it) some serious consideration. But I was so exasperated with the state of my tool box chaos that I decided I’d start looking on Amazon so that I could find a quick fix. 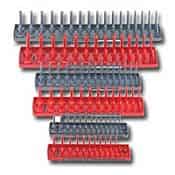 I’d seen and used the socket organizing trays before at a friend’s garage and I liked them enough. But ultimately, I wound up finding the Hansen Global 92000 SAE & Metric Socket Storage Trays and immediately was very excited about them. I especially liked the fact that it organized things by socket type, height, and socket size. And upon receiving them I quickly put them to use. This is when I found some things out:

Neither of these is a big problem, but I did have a bunch of leftover sockets that still need to be stored somewhere. And each empty peg on the socket tray was a bit of wasted space. The easiest fixes for these challenges would be to ditch my duplicated sockets and buy more sockets to fill the empty tray. But I wasn’t too thrilled with that “solution” because I figured that some of those more common sockets would come in handy, especially if you’re working with a helper. It’s also not like I’m a shade-tree mechanic or constantly tinkering on something, so I probably wouldn’t get much value out of having nearly every possible socket. 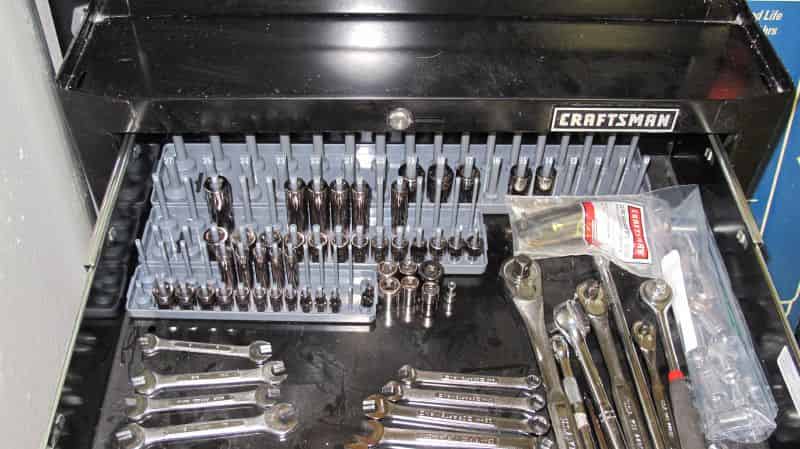 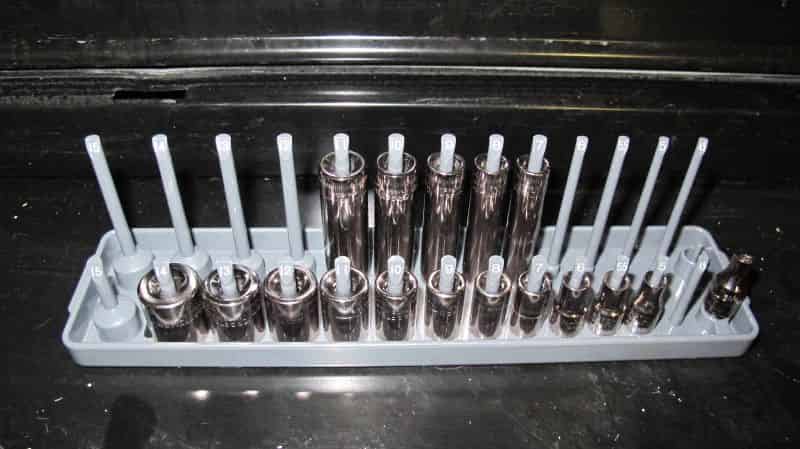 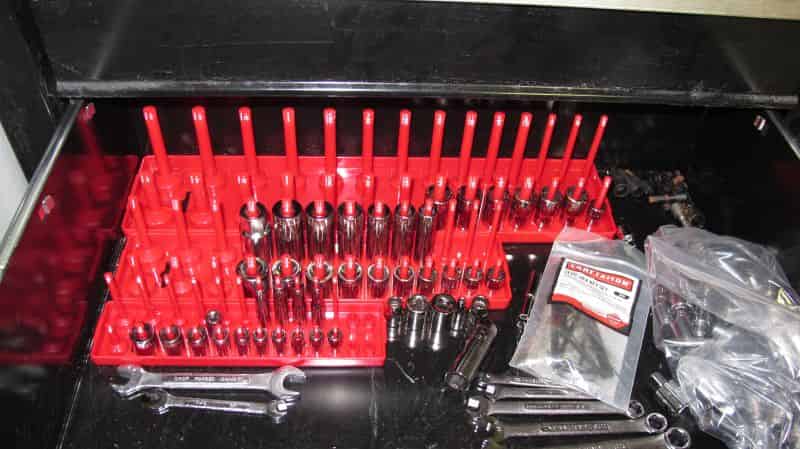 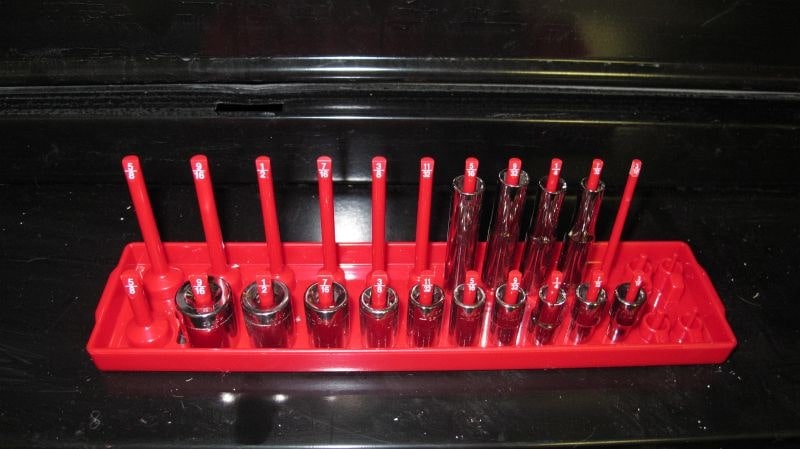 I was pretty excited with the Hansen Global 92000 SAE & Metric Socket Storage Trays. I was finally able to get my sockets and wrenches in my toolbox into a somewhat organized and sane fashion. I had a dedicated SAE drawer and a dedicated metric drawer and wrenches scattered between them both. And then, something terrible happened — I found something better!

The minute I had my toolbox all situated, Pat showed me the FreeZone® Storage System from Lee Valley & Vertias which he found out on the Garage Journal. It’s comprised of two kinds of pieces: a grid-like “toolboard” which can be laid down in a tool box or hung from a wall or pegboard, and then there’s a variety of pegs that snap and twist into the toolboard. Amongst those pegs are socket adapters for ¼”, 3/8” and ½” sockets as well as pegs that can be used as a grip for your other tools. How you decide to arrange your sockets and tools is completely custom to your preferences. I immediately preferred the FreeZone® Storage System over the Hansen Global 92000 SAE & Metric Socket Storage Trays because I was going to be able to eliminate those empty spots and because it offered me the option to pack things in more densely together. And finally, because of my 3D-printing friend it might even be possible to model and invent our own kinds of pegs to go into the toolboard.

However, there are areas in which the Hansen Global 92000 SAE & Metric Socket Storage Trays is superior to the FreeZone® Storage System: 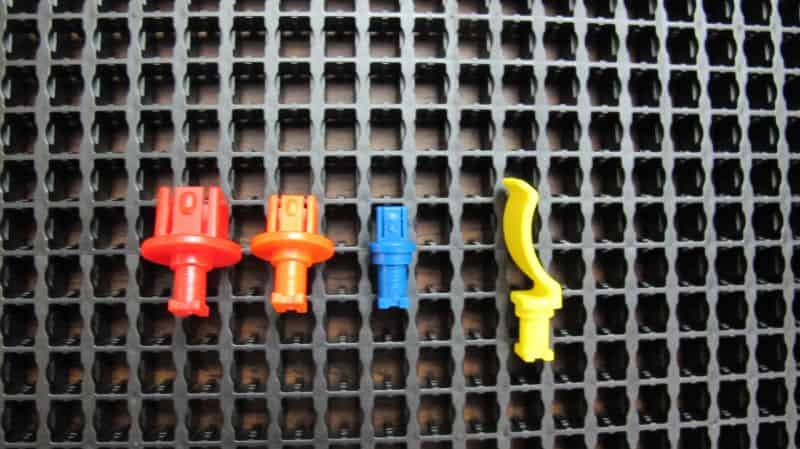 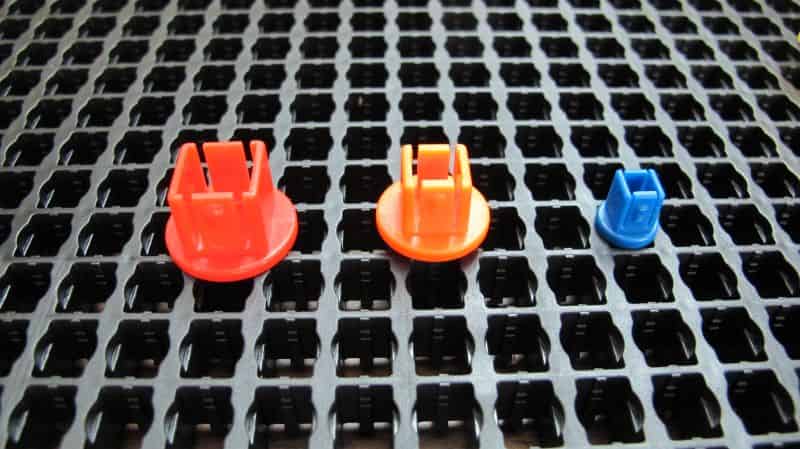 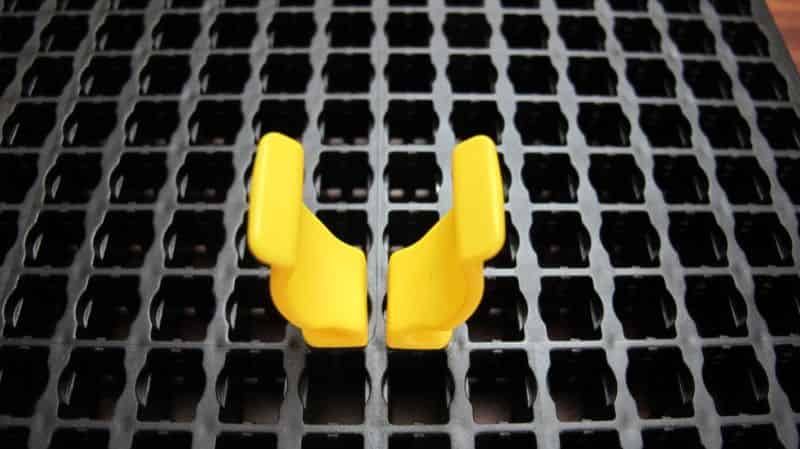 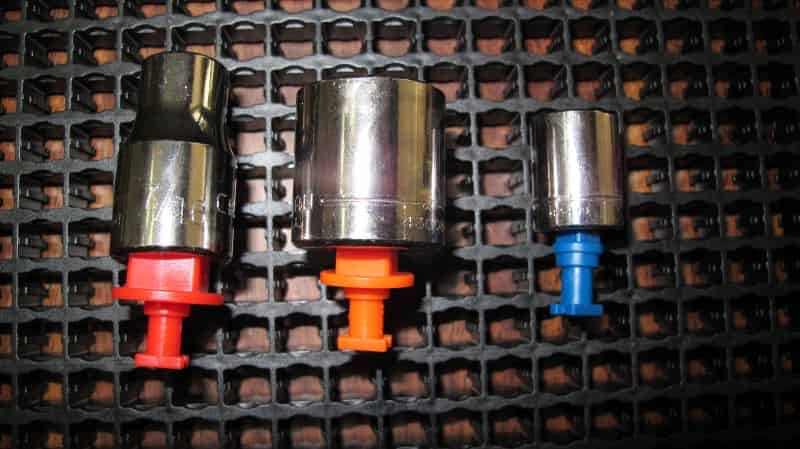 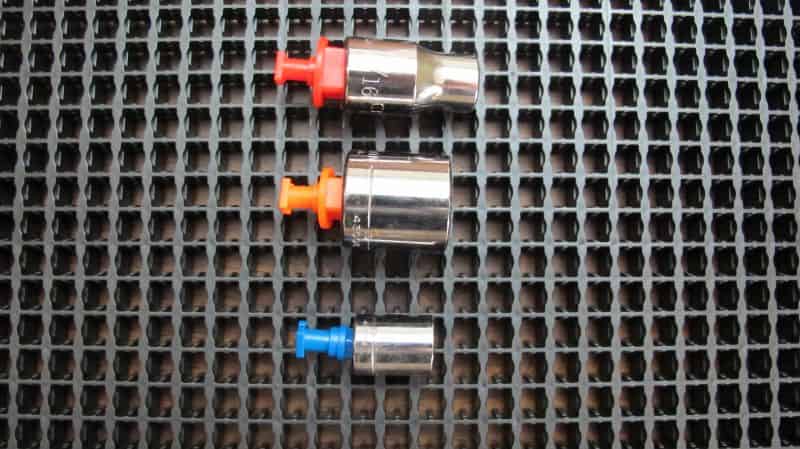 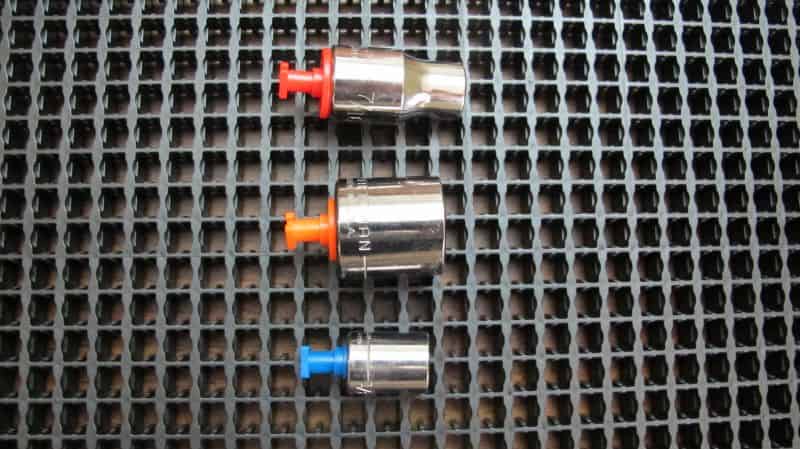 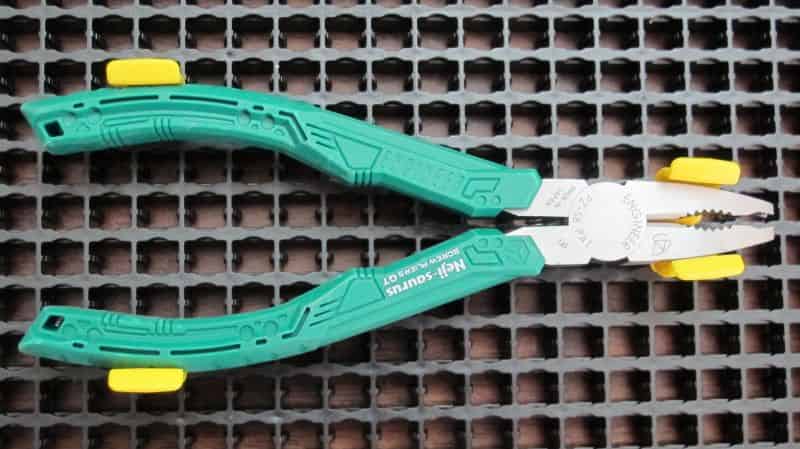 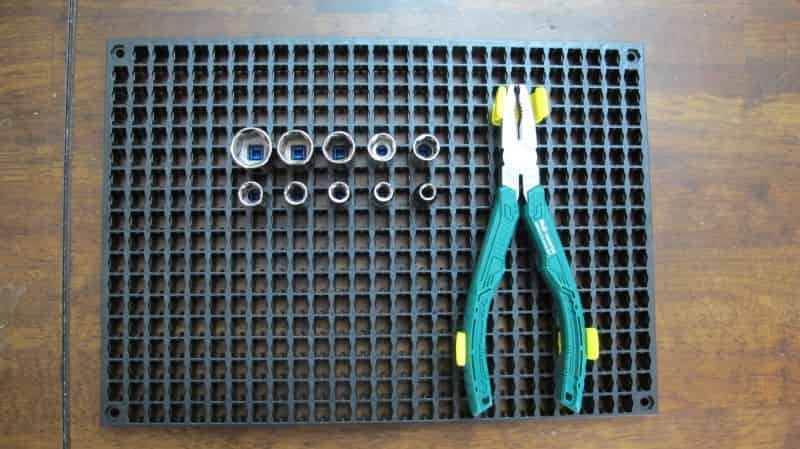 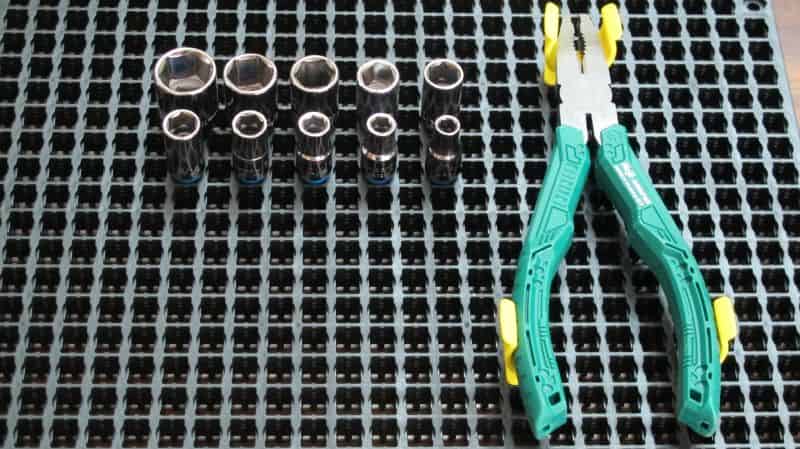 I wouldn’t quibble with anyone’s selection of either of these socket organizers. I’ve tried them both and think they’re equally adept at helping your organize your toolbox, especially when it comes to organizing sockets. Now that I’ve tried both, my choice is the FreeZone® Storage System because of its additional flexibility and its uses with other tools. On top of that, I’m pretty excited that we can cook up some of our own ideas for pegs and to use Pat’s 3D printer to print up our ideas.

Show me your Messy Toolbox!

Right now I have an unused set of Hansen Global 92000 SAE & Metric Socket Storage Trays sitting in my garage. They’re only ever-so-slightly used, having held my sockets for maybe a day or two before Pat found me something I wound up liking better. There’s not really much that I can do with this redundant set of trays. If you’re a frequent follower of my blog then you won’t be surprised at all that I’ve decided to give the Hansen Global 92000 socket trays away. The giveaway will be a raffle of sorts, here’s how you can enter:

I’ll take everyone’s entries and then pick someone at random as a winner. Depending on the number of entries, I may also keep your photos and add a gallery of the messy toolboxes to the end of this blog once a winner is announced.