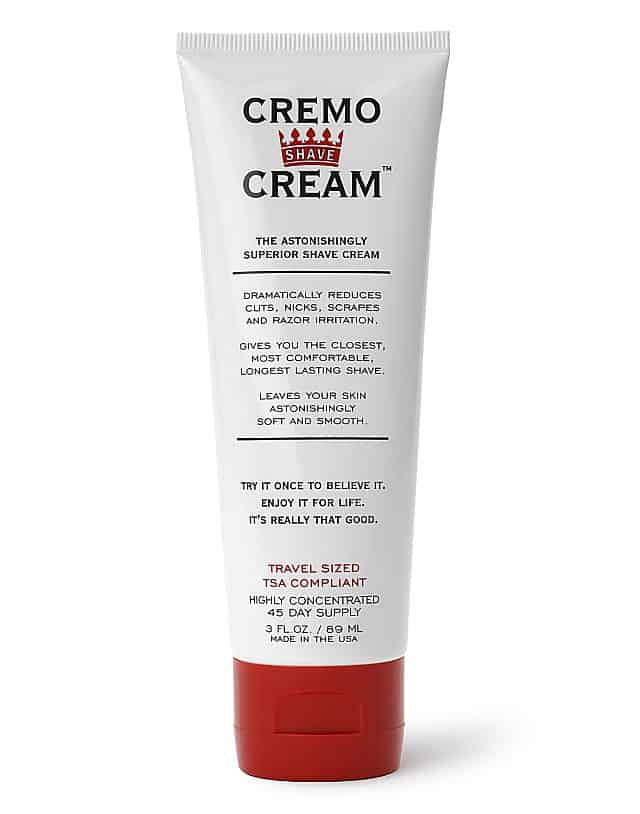 The other day while out at my favorite restaurant, my buddy asked me if I’d ever heard of Cremo Cream shaving cream, which I hadn’t. He had some pretty high praise for it when compared to the more typical shave gels like the Edge Shave Gel, which I’ve probably been using now for decades. I must have had an incredulous look on my face as he sang the product’s praises, because the next time I saw him he generously gave me a package of the product and told me to try it out. Considering that I’ve been willing to let my facial hair embarrass me repeatedly in the past, I decided it’d be worth a shot and I could maybe write about my experience with a men’s beauty product.

Right off the bat, the product made several bold claims on the packaging, particularly: "Try it Once to believe it. Enjoy it for life. It’s really that good. ™" That had me thinking that it’d probably be impossibly difficult for the product to live up to the hype. It was really surprising when I noticed that the packaging was small, even tiny. My TSA-approved can of Edge Shave Gel could very well double as some sort of crude weapon and I often counted upon it within my theoretical anti-terrorist combat action plan. This 3oz Cremo Cream wasn’t even going to keep the darling older lady seated next to me from taking my armrest. But at the very bottom of the package, it claimed that three measly ounces would last at least 45 days.

In reading the remainder of the packaging, I began to understand why. The directions for use of the product instruct you to use very little for each time you shave, which was surprising all by itself. When was the last time you bought a product and they encouraged you to use less instead of more? The words “Less is often best” are actually printed on the packaging! The exact directions read:

This Cream is unique: please read!

Rub skin with the hottest water you can stand for 30 seconds (in shower works best or use a hot towel).

Cremo Cream is highly concentrated and water activated. So, lightly coat skin with an almond-sized squeeze and let plenty of water mix with it. Less is often best.

Add water as needed to make & keep it slippery, effective and easy to rinse from razor.

Massage back into skin you want to re-shave. This cream is so effective, most can comfortably shave against the grain for an even closer, longer lasting shave.

I was pretty shocked when all of their claims were backed up by their product. The first few days, I followed the directions to the letter and each day, I used a smaller and smaller amount of the product. Every day, I expected to start scraping and nicking my poor little face to death, but that never came to fruition. About the third day in, I decided to shave against the grain first. Even then, my face really didn’t seem to complain all that much but I wouldn’t exactly endorse the practice. Shaving against the grain first when using my traditional shave gel would’ve normally resulted in an uncomfortable shave and probably a nick or two.

Generally speaking, I don’t care to shave on the weekends, and on Monday morning I start the week off by doing a real “good” job by going with the grain, against the grain and even across the grain. Just like everybody else I’m not terribly fond of Mondays and this shave usually gets my week off on the wrong foot entirely. My first Monday with the Cremo Cream was a much different experience; unlike most other weeks it didn’t feel like I was scraping the hairs off of my face.

My favorite aspect of shaving with Cremo Cream is checking post-shave to see if I’ve missed any significant chunks of my face. On the typical weekday, I’m doing my morning routine right around my top speed, so it’s not all that uncommon to miss a swath of my face in my caffeine-deprived rush. With the traditional shave gels, I’d usually decide against getting out some more gel, lathering up and shaving the areas that I missed. But with Cremo Cream, I just splash some hot water on my face, and after a few swipes of the razor blade then I’m good to go.

I haven’t had a chance to see if three ounces will really last me longer than 45 days, but given my usage after a week or two, I’d be willing to bet I will make it. As far as cost goes, the Cremo Cream sseems to be a bit on the expensive side at first glance. On Amazon.com, you can get a 3-pack of the 6 ounce Cremo Cream tubes for about $30.00. That’s roughly 9 months’ worth of nonstop shaving. If you’re only shaving five times a week like me, then it’d last even longer—over a year! I’m pretty certain that over the same amount of time, the cost of Cremo Cream is going to be competitive with the traditional shaving gels. Furthermore, any microscopic pricing advantage traditional gels might have are quickly accounted for by a far more enjoyable shaving experience that you may have to do as frequently.