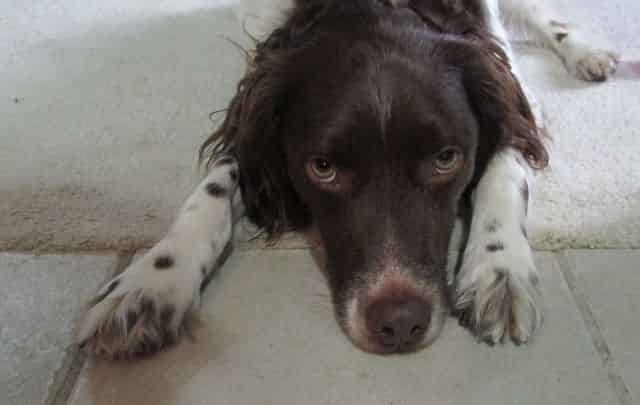 Back in January, our three-year-old Brittany, Crockett, had a seizure. We wound up running to the emergency animal hospital, where they did some tests, and didn’t find anything out of sorts. The vets suggested we keep an eye on him and if it happened again soon, we should speak to our regular vet.

A very recent Thursday night just as I was about to go to bed, Crockett started making a ruckus in his kennel. I thought he might be dreaming and running in his sleep, which happens from time to time, but when I looked into the kennel he was convulsing. I opened the kennel and put my hands on him and tried to gently wake him, but he was out of it and continued to convulse. At this point, I realized he was having another seizure. I mostly kept my hands on him to try and keep him from banging his head on anything. Eventually, Crockett came to and whined in fear and confusion. Almost as fast I recognized his fear and confusion, he lashed out at me, biting the back of my right hand just behind the thumb and beneath the index finger. As quickly as he bit me, he let me go, and I left the room to howl in pain and let out a few obscenities.

Crockett continued his post-seizure confusion. After I left the room he lost control of his bladder and bowels and started running around the house barking angrily at anything that moved. A few minutes later, he finally settled down and paced around the house trying to make sure everything was OK. By this time, my hand was pretty tender and had a bit of swelling, but mostly was just a few scrapes and a good puncture wound or two from Crockett’s canine teeth.

At the time, I remembered Crockett’s last seizure and his post-seizure confusion and aggression. I understood when I continued to hold him that he’d eventually come to and he might act out of sorts afterwards. I knew there was a chance that this might get me bit, but I was okay with that risk and wanted to protect my dog. Nothing about what he did surprised, and you could even say that I was asking for it.

Because my hand hurt like my hand had hurt when I broke it a few years before, and because I’m a Type 1 Diabetic and any kind of possible infection could lead to a hospitalization, I started considering getting my hand looked at. On the way over to the emergency room, I had a disturbing thought. What if the hospital turned around and reported the dog bite to animal control? My wife and I discussed this a bit as we drove and we figured that if they heard the entire story and shared it too, that either the hospital or the animal control people would understand and there’d be no serious consequences. As I was admitted, the admissions staff mentioned they would have to report it to animal control. Every nurse, orderly, physician’s assistant and doctor who came into our room each were asked if they actually would report it to animal control and their answers were encouraging, but not definite.

After some X-rays, flushing of the wound, some filing of paperwork, and filling of prescriptions, we were headed home at 3 a.m. I attempted to sleep, but the night’s activities and the uncertainty of the animal control report made it difficult to fall asleep. Hoping the worst of it was behind us, I finally dozed off a couple hours later.

The rest of Friday would prove to be more frustrating and eventful than the beginning. I woke up in the morning and decided that I wanted to get out in front of any possible report to animal control. I called up the Plano Animal Control office and explained to the staff member everything that happened the night prior. She responded by informing me that anytime that the skin is broken, the animal would need to be placed in quarantine for ten days, and she began to make arrangements to have Crockett picked up. I was dumbfounded and bewildered by this development and told the staffer that picking up the dog was not an option. I explained that I had been a responsible pet owner, that both Crockett and I were up-to-date on all of our vaccinations, and that there wasn’t any transmission of diseases between us. I also explained that Crockett’s bordetella vaccine was up and we had a vet appointment the next day to get that taken care of, plus I wanted my vet to evaluate Crockett’s seizures so that we could begin to manage that condition. I asked if there was anything else that we could do and the animal control representative said that she’d consult with her colleagues and boss about any other options and call me back.

In the meantime, I quickly called East Plano Animal Hospital to see if I could sneak Crockett in quickly for his bordatella vaccination. They didn’t have any appointments open that day, but I did learn that there was an option for a home-based quarantine provided I met the criteria. Armed with this option, I decided that was going to be how this was going to move forward, whether they liked it or not.

The folks at the Plano Animal Control arrived at the same conclusion independently; when they called back they explained the concept and suggested that I come down to their office immediately in order to get this underway. I had been under the impression that both Crockett and Zoe had been registered with the city’s animal control via their rabies vaccinations, but this was not the case. I went into their office and with assistance from my vets’ records I was able to get both dogs registered and set up.

Apparently, in order to control the spread of rabies in the state of Texas, anytime a dog bites a human then that animal is placed in quarantine for 10 days. See the bottom of this blog for the full text I was able to find from the Texas Administrative code.

In this case, I think that the spirit of the law is getting lost in the letter of the law and the ensuing enforcement. Last year in Collin County there were 25 cases of rabies reported, all of those in skunks. At no point in this process was any kind of background information gathered. Nobody ever asked if Crockett had gotten loose, or if while out and about he’d had an encounter with any other animal. Had they bothered to ask, I would’ve explained nothing like that had happened. If people’s critical-thinking skills were leveraged at any point in the process, this could have been avoided. But unfortunately, critical thinking just isn’t used in processes like these.

I don’t want anyone to leave with theimpression that I had a negative experience working with the Plano Animal Control office. This couldn’t be further from the truth. I think they were extremely polite, understanding, and helpful considering the circumstances. They definitely displayed the critical thinking that I think is missing in this process. They’re just stuck with the unenviable task of enforcing a stupid law. In the couple hours I spent in their office, I was very impressed with how they worked with their other clients and also with the work they were doing. Technically, I don’t even qualify for the home quarantine because of my two old cats, both of which have had their rabies vaccines lapse because of the vet’s concern about their health. I brought a letter from my vet to the Animal Control office and they agreed to still let us home quarantine Crockett. Because of what I saw of how they treated others, because of how they treated me, and most importantly how they treat the animals in their care I was inspired to include a donation with the other costs associated with registering my pets and Crockett’s home quarantine. 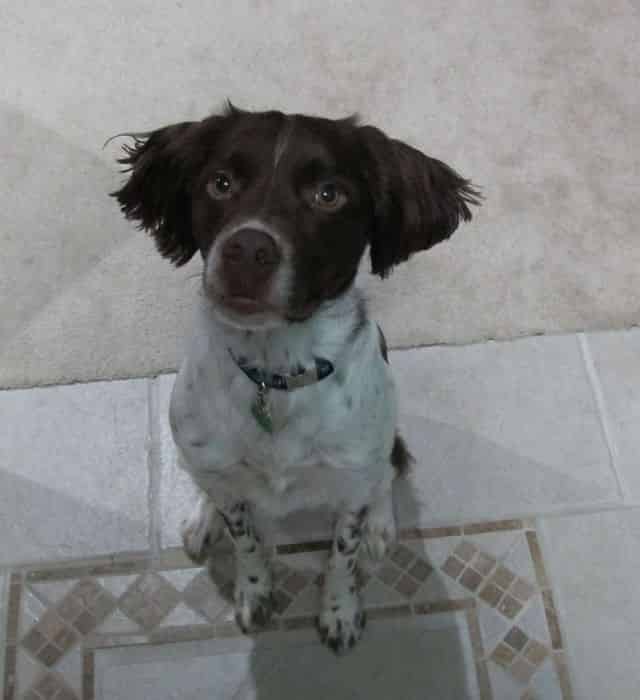 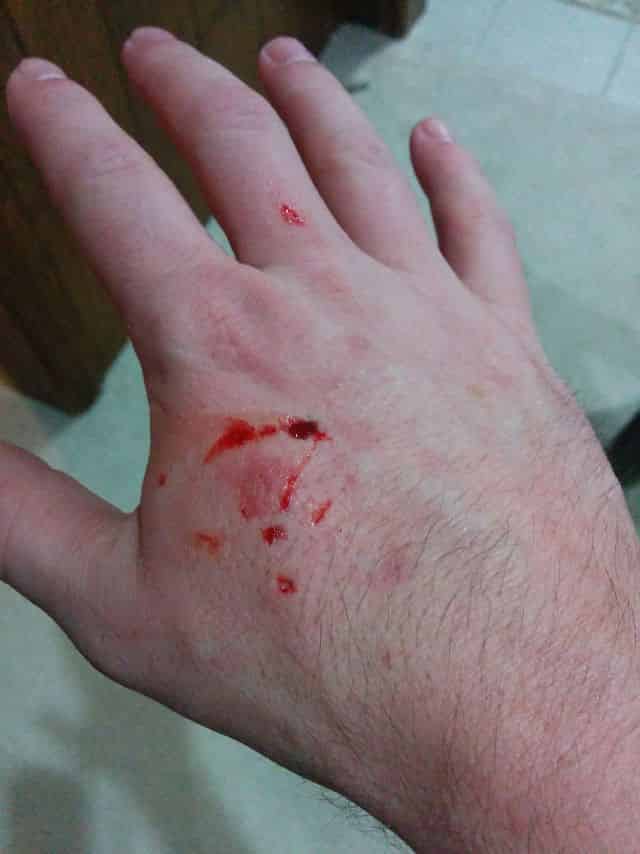 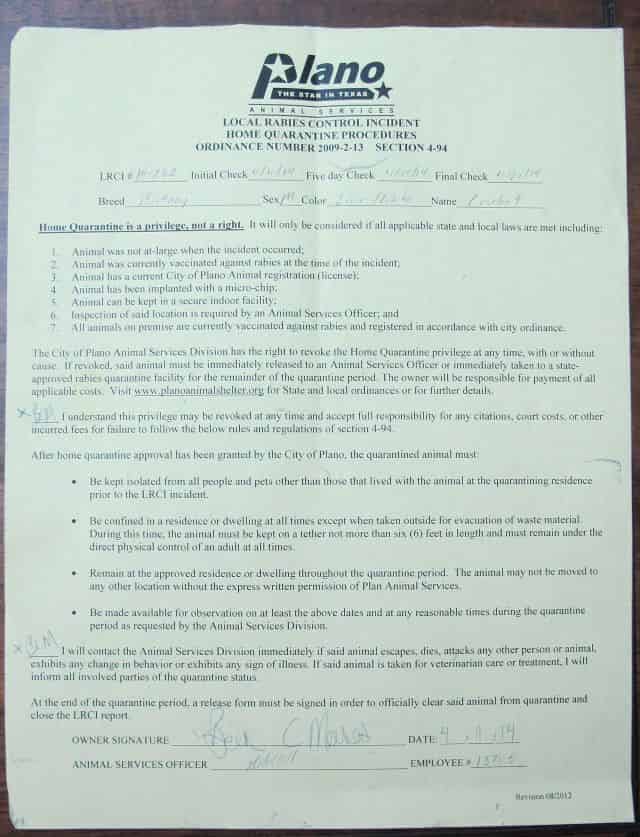 I am not a doctor, a lawyer, and I don’t even play one on television. However, in the same situation in the future, I won’t be going to any doctor. I’ll treat it myself and hope that it doesn’t get infected. And this doesn’t just go for my two dogs, it applies to any dogs who I know. If I get bit and it is more serious, I’m going to need to think of a good story, something like I was building a replica robot-dog and testing its biting power and accidentally left my hand in its mouth for too long. Either that or maybe that a snake bit me, since reptiles can’t get rabies.

As someone who cares for dogs, and cares for the other people who have dogs too, the net result of this law is that I won’t be seeking medical attention in the event that a dog bites me. For some reason, I don’t think that’s what the lawmakers had in mind, or at least that’s what I’d hope.

From my experience and others like mine, everyone should be fully aware of the potential consequences related to seeking medical attention after a dog or cat bite. Perhaps instead of immediately heading to an urgent care clinic or emergency room, I’d consider seeing my primary care physician instead. But I wouldn’t blame them for following the letter of the law and reporting it to the authorities. My recommendations:

Hopefully, cases like mine are the minority and most people don’t get bitten by any kind of dogs, especially their own. Our vet prescribed some anti-seizure medications today in-absentia of the patient. Hopefully, we’ll never see a seizure again. But if we do, I’ll do my best not to get bitten. On the off chance that I do, I’ll avoid the emergency room and try to treat it myself.

When a dog, cat, or domestic ferret that has bitten a human has been identified, the custodian will place the animal (regardless of its vaccination status) in quarantine as defined in the Texas Health and Safety Code, §826.002, until the end of the 10-day observation period. The animal must also be quarantined if there is probable cause to believe that it has otherwise exposed a human to rabies. The observation period will begin at the time of the exposure. The animal must be placed in a department-licensed quarantine facility specified by the local rabies control authority and observed at least twice daily. However, the local rabies control authority may allow the animal to be quarantined in a veterinary clinic. As an alternative to quarantine at a department-licensed facility or a veterinary clinic, the local rabies control authority may allow home confinement. To allow home confinement, the following criteria must be met.

(1) A secure enclosure approved by the local rabies control authority must be used to prevent escape.

(2) The animal has been vaccinated against rabies and the time elapsed since the most recent vaccination has not exceeded the manufacturer recommendations for the vaccine. If an unvaccinated animal is not over 16 weeks of age at the time of the potential exposure, it may be allowed home confinement.

(3) During the confinement period, the animal’s custodian must monitor the animal’s behavior and health status and immediately notify the local rabies control authority if any change is noted.

(4) The local rabies control authority or a veterinarian must observe the animal at least on the first and last days of the home confinement.

(5) The animal was not a stray as defined in the Texas Health and Safety Code, §826.002, at the time of the potential exposure.