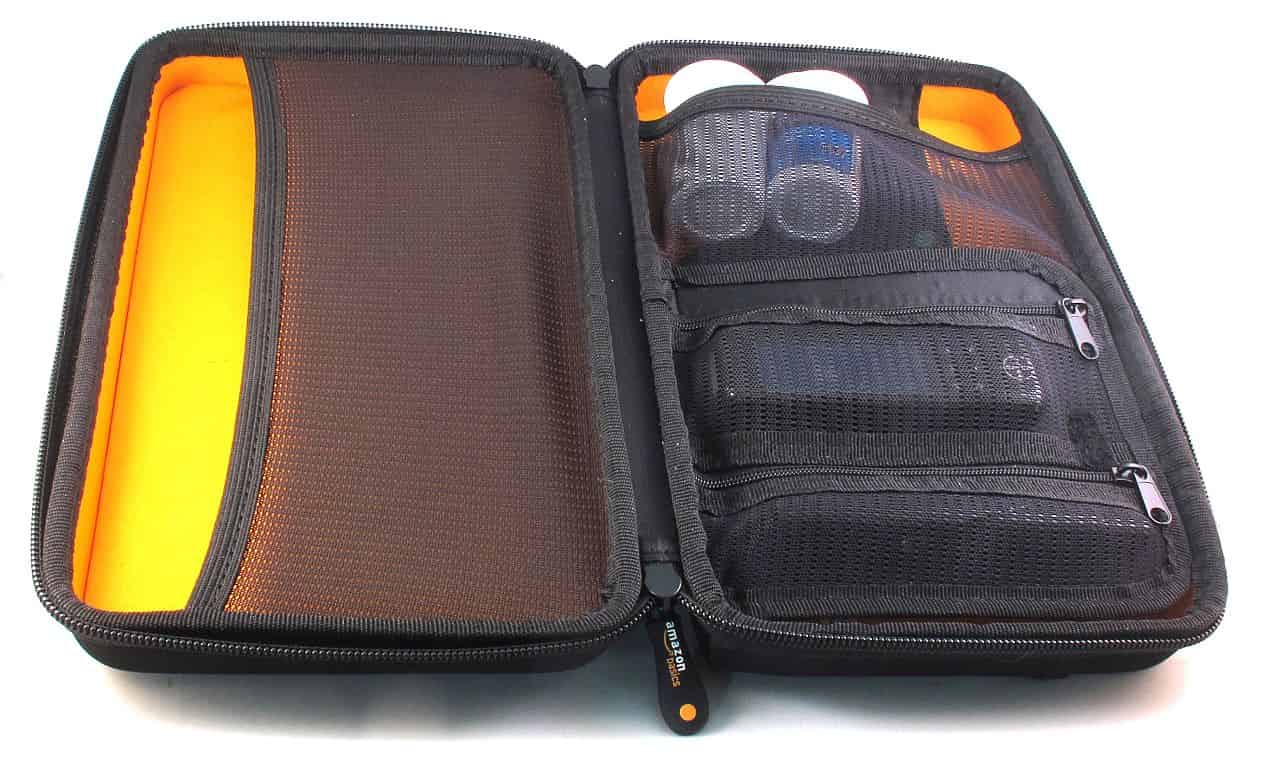 The day after I was released from the hospital after my diagnosis of being a Type 1 Diabetic, I looked over my syringes, vials, test strips, lancets, logbook and other such supplies and decided I needed some sort of carrying case. However, in being either vain or private, I wanted it to be discrete. Thankfully, this was before the age of smartphones, and toting around a day planner wasn’t all that uncommon. I wound up using my diagnosis as an excuse to buy a Palm Vx to eliminate the logbook and my paper sliding scale and then I picked up a day planner from Franklin Covey. I wound up emptying it of everything except the zip-lock pouch inside, and that’s where I stored my supplies. It had a nice little pocket inside for PDAs, which fit my Palm Vx nicely, and when it was obsolete, that’s where my glucometer and lancing device went. I had this day planner so long that it even got nicknames, it was known as “The Diabetes.”

I’ve always been afraid of losing “The Diabetes.” It had its own place everywhere that I’ve lived, and the minute it is moved from that place, chaos and anarchy began to take over my life. 999 times out of 1000, “The Diabetes” just wound up getting pushed out of the way, relocated over to my computer desk, left in my laptop bag or scooped up by my loving wife and tucked away because she takes such good care of me. I remember scolding her a little bit and telling her that I loved how much she helped out but that one day I’d take it for granted and we’d both forget “The Diabetes” and we’d wind up somewhere and needing it, or worse, forgetting it somewhere. We tackled that challenge and it just became part of our routine, she grabbed it and packed it in her purse and then I asked her before we left to make sure she had it. Every time that I thought I lost “The Diabetes,” it was sitting somewhere right where I left it and that’s how things worked for over a decade.

But then while on my fantastic trip to Spring Training, disaster struck. My Dad and I went off to dinner. I hadn’t been feeling well, so I tested my blood sugar before we left the hotel. Then we headed down to the lobby, looked at their smart display near the front desk, and then asked for some suggestions before heading out in the rental car. There was no parking near the restaurant, so we parked in a nearby garage. About halfway between the garage and the restaurant, I realized I’d forgotten my kit. I grabbed the keys from my Dad and told him to have a beer waiting for me when I got back. I went back to the rental car expecting to find it right where I had been keeping it the whole trip, except it wasn’t there. I did a pretty thorough search of the entire car, even finding an empty beer bottle from a previous renter, but did not find my Diabetes kit. Assuming this was like the million other times I misplaced it, I figured it was sitting right on the hotel bed where I left it after testing it last. Because I was using my continuous glucose monitoring and I had measured before leaving the hotel, I was pretty confident I could give myself the right amount of insulin.

Things got tricky, we had zero-dark-thirty flights out of Phoenix the next morning and rental cars in the Phoenix area are ridiculously expensive. To save time, stress, and money our plan was to return the car the night before, catch the hotel shuttle back, and just worry about waking up on time. We executed this plan with incredible precision and got back to the hotel when I realized The Diabetes wasn’t there. Panic, frustration and inward fury set in. Here I was, on vacation, with no transportation, and I’d lost just about the only thing that I’d owned for the previous decade. We turned the hotel room upside down, we paced the route that we took when we left the hotel, we scoured the lobby, and interrogated the front-desk employees but The Diabetes could not be found. I called the folks at SIXT Car Rental and at least two or three of their kind employees searched the car without any luck. After a couple hours of searching and calling myself every name in the book, we gave up. It was getting late and we had to spring into action still. A 24-hour pharmacy that had a 24-hour pharmacist was located because the test strips are expensive and frequently found behind counters, a cab was summoned, and I bought new supplies.

Thankfully, some of the urgency was mitigated by the fact that I always travel with almost double of my supplies. I pack twice as many test strips, insulin, insulin pump infusion sets and CGM sensors than I actually need. But I don’t pack an extra glucometer, lancing device or an extra version of my trusty old day planner.

One of the first things I did upon getting home was start searching for a replacement carrying case for my Diabetic supplies. I actually started again looking at day planners even though I’ve been teased by people the past few years for actually carrying around a day planner to stay organized instead of using my smart phone. I searched for Diabetic Carrying Cases on Amazon.com and dug through numerous products. Unfortunately for those products, I’m still pretty vain. I just don’t want it to be obvious that I’m carrying around some sort of medical supplies. Further complicating matters, I wanted something smaller, and I wanted it to be a bit sturdy to protect the contents. Just about every one of the Diabetic carrying cases I saw were big, soft, and (to me) screamed “Hey! Look at me! I’m a diabetic!”

I’m not sure what happened to steer me that way, but I wandered out of the Health and Beauty section in Amazon and wound up looking at some random electronics repair tool kit, which came in what looked to be a pretty nice case that met my needs. It was an inexpensive kit, and at its price, I was tempted to buy it just to empty out the tools and use the case for my Diabetic supplies. That inspired to search all of Amazon for ‘small electronics case’, which had a plethora of interesting little cases for me to consider. Two items jumped out at me immediately:


I ordered both; my intent was to use them at the same time. The Grid-It was barely small enough to fit inside the case, but it didn’t fit very well and I didn’t really have that many supplies to make use of it. The AmazonBasics Universal Travel Case, on the other hand, was nearly perfect for it’s job. My only complaint is that the most “convenient” portions of storage aren’t very restrictive. I’d much rather have things that I’m frequently using like my testing supplies in these convenient areas, but if I did that they’d get loose and roam around the inside of the case, begging to fall out and get lost when I opened it. Thankfully my glucometer is from the Bayer USB Glucometer line of products and is pretty narrow and skinny. The glucometer and lancing device both fit nicely in the zippered pockets, my test strips stay nicely in the pocket above it without falling out, I have some extra AAA batteries and lancets in the velcro pouch behind the glucometer. There’s also some extra room in the pocket on the left to store additional supplies if needed. The outside of the case is a bit rigid, so I feel that it could stand up to getting crammed into my laptop bag and into an overhead bin in a plane without me worrying about the contents getting crunched.

My only real complaint about the case is the fact that it’s a bit taller and a bit deeper than my old day planner. But at its price, it is a fraction of what I paid a decade ago for my day planner and is an excellent bargain at $10.49 when you compare it to similar electronics carrying cases, and its an even better bargain when you compare it to some of the Diabetic carrying cases, which are at least 2-3 times as much.

And what about the Grid-It? Well, at first I thought about incorporating it into my laptop bag but seeing as how my bag is already organized just the way I like it, I thought of a different better use. Next time I go on vacation, I can use it to pack an extra glucometer, lancing device and test strips just in case I need them for my next adventure. The best way to insure I won’t need my backup plan is to make sure my backup plan is always queued up and ready to go. 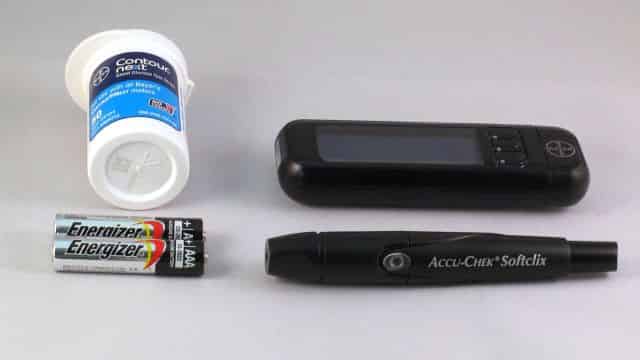 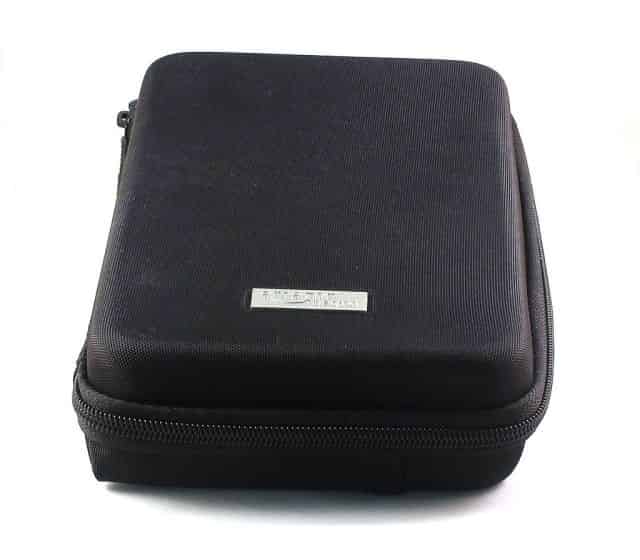 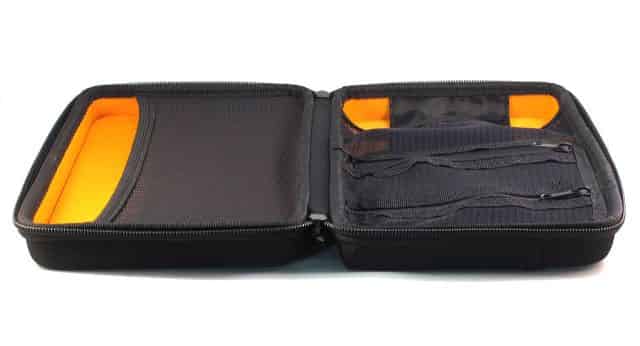 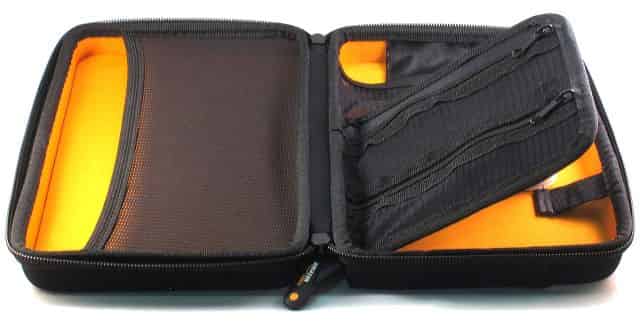 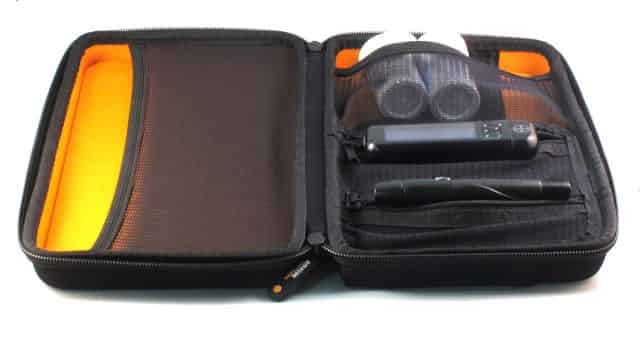 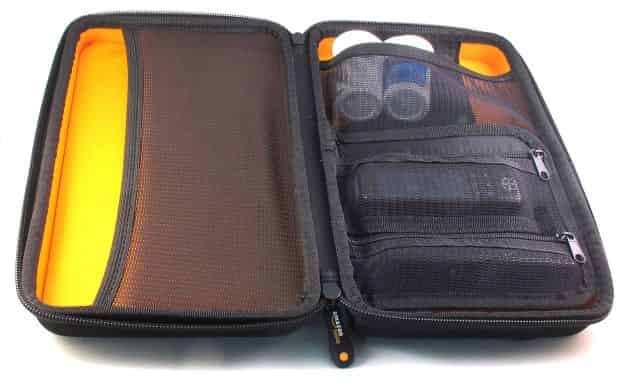 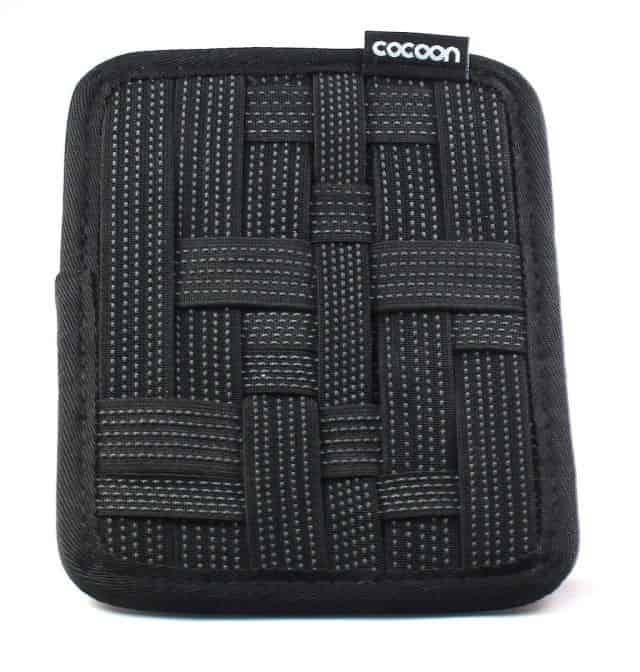 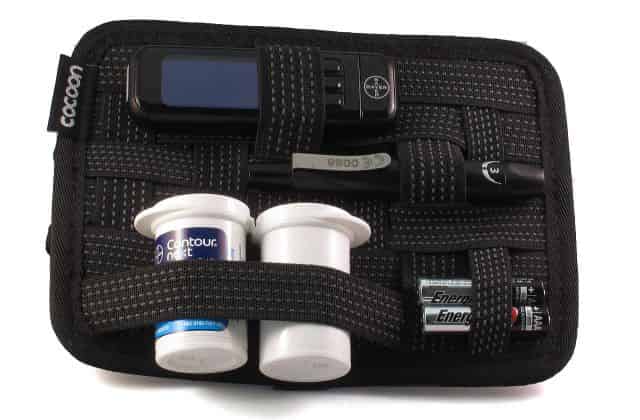