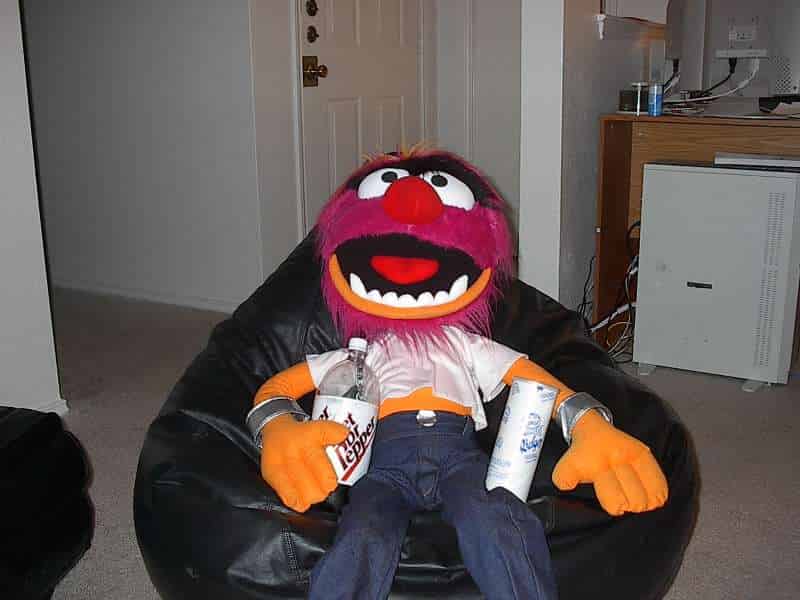 Quite a few years ago, my roommate Pat and I went to Dave & Busters frequently. Frequently probably was putting it mildly. We were and continue to be geeks, we were hungry and we had little-to-no-regard for our disposable income. We’d pretty frequently meet up after work and head to Dave & Busters for a few hours.

One day, we were talking about all the 80’s arcades we remembered hanging out in growing up and just off-handedly, I mentioned the typical gift-shop where you could buy prizes with tickets won at that games. And about how all the really cool stuff was so prohibitively expensive tickets-wise that it made more sense to save our small allowances for months and just buy the items directly.

Most of the times we’d play a few ticketed games and then buy useless knick-knacks that were probably lost or forgotten about by the next morning. Eventually, I got sick of trying to buy the really cheap stuff and tried to think of other things to do with the tickets. One evening, there was a young kid in the gift shop counting and re-counting his tickets with an armful of stuff. Myself, I had a little cupful of probably a good 200-300 tickets. Not really thinking it through, I walked up to the little guy and said “Here you go bud, you can have my tickets.” I guess I had expected shock, awe and gratitude from the guy, but what I had inadvertently done is to set off his STRANGER DANGER alarm and he completely conflicted; scared of the stranger offering him free things and tempted by the hundreds of tickets I was giving away. I quickly tried to correct things and told him to go find his Mom or Dad first and I’d be waiting. For a few brief moments, I wondered to myself if he was running to the nearest store manager or police officer he could find and what kind of trouble I’d just brought on myself. Thankfully, he came back nearly immediately towing his mother and I was able to give her the tickets I didn’t want to spend.

Pat and I decided that instead of trying to appear as if we were trying to lure children with our unwanted tickets that we’d try and see just how many tickets we could collect. As somewhat mature adults, we had the tools in our toolbox to figure out which games had the best return on our investment and the ability to resist spending every single ticket within an hour of winning them. We immediately set out at playing some of the ticket games which we typically ignored because we found all the other games a bit more interesting. We now had a new goal: acquisition and hoarding of a copious amount of tickets. Over the next few weeks, we became regulars of the gift shop and got on a first-name basis with the people who had the responsibility of weighing/counting the tickets and crediting them to our accounts.

We established our ticket wealth primarily by recognizing there were a few games that seemed to pay out more tickets for our effort than others. For example, there was a linked basketball game each and each time a player hit 30 points everyone got more time in the game. It had a maximum of 6 players. If there were 3-4 people there that looked like they could eventually hit 30 points, it was a no-brainer to stand over there and play as long as you could keep the game full.

Another game we played a ton of was called Chip Away, it was basically some sort of odd game where you flung poker chips around trying to match up 3 or more of the same poker chip to score points. The more points you scored the more tickets you got. For some reason, the payout on this game was quite astonishing. I can’t recall the game mechanics that made it pay out so well, it just seemed like incredibly easy “money” to us at the time.

As it stands today, I never see the same behavior from either of these games. Somewhere along the line, just like at the casino, they changed the behavior of the game and the payouts dropped back down to pedestrian levels. In our numerous trips to different Dave and Busters since then both Pat and I notice that our favorite games from back then pay out at a greatly diminished rate. We’ve joked once or twice that it’s probably our fault that those particular games got toned down.

I can’t recall an exact number of the tickets we earned, but I believe by now it’s easily in the hundreds of thousands of tickets. Naturally, this happened over the years and we wound up buying quite a few items along the way. Some of the “bigger” ticket items were things that cost up to a couple hundred dollars. While playing we tried to keep loose track of how much money we were spending in order to earn those tickets and in every instance I’m sure we would have been much better off just buying the items we wound up spending the tickets on. But in some cases we felt that we were dangerously close to the break-even point. It was a bit entertaining to think that we were close to basically spending the same amount of money to acquire an item and also getting to play games and have fun along the way. Hopefully for the accountants at Dave and Busters, that wasn’t ever the case.

At any rate, of all the items I’ve ever “won” at Dave and Busters, here’s my all-time top three. I used a variety of factors in determining my favorites. Primarily, how much enjoyment I got in the prize. But I also factored other things in like the perceived value of the tickets compared to the actual cost of the award.

This item inspired this blog as we went to D&B’s to celebrate Pat’s birthday recently. I happened to have a ton of tickets saved on my Power Card and we bought a few random odds and ends, but the helicopter was the big-ticket item. I didn’t have much faith that it’d be fun, but after throwing 6 AA batteries in the remote control and then using those batteries to charge the smaller battery in the helicopter it actually was pretty fun to fly. We started talking about ranking all the things we’d bought at D&B’s and that’s how this blog article was conceived. Earing the helicopter an automatic admission to this top three list.

At the time, we had a functioning Playstation 2 that up and died on us. We were pretty feverishly playing both Gran Turismo 3 and The Simpsons: Road Rage in our idle time. Then one traumatic day our PS2 died. Naturally, we had more idle time and needed to get our video gaming fix somehow, so we started going to D&B’s more often. We didn’t set out to replace the broken PS2 with one that we scored at D&B’s but that’s the path we wound up going down. One day Pat suggested buying a new PS2 and then we discussed the very remote possibility that we could earn enough tickets to just buy a PS2 by earning tickets at D&B’s. This is when we got most focused on our return-on-investment and nearly burnt us out on Dave and Busters entirely. The sheer number of tickets needed seemed incomprehensible, but when we crunched numbers (very roughly) the dollars almost seemed to add up. The cheapest route was definitely to pay for the PS2 ourselves, but dollar-for-dollar our D&B PS2 wasn’t all that far behind.

Animal wins in a landslide. Within the three purchases, I believe he landed somewhere in the middle chronologically. We were pretty spent accumulating the tickets in the most frugal of fashion for the Playstation 2. There most certainly was quite a bit of fatigue associated with that purchase. After finally “winning” the PS2, we went to Dave and Buster’s less frequently and just accumulated tickets. On a lark one day, we went in and I saw this 4 foot tall stuffed animal of Animal from the Muppets.

Those of you who know me well have probably heard me tell the story about how if it hadn’t been for The Muppet Show my parents probably would have had to resort to sedatives to get me to actually bathe on any kind of regular schedule. We all loved the Muppets and I still do to this day.

At any rate, it struck both Pat and I as hysterical to this monstrous stuffed animal. We both had sports cars at the time and we thought it’d be comical to leave him in one of the car’s passenger seat. For a very long time, Animal was in the backseat of my ‘92 Mitsubishi Eclipse GSX staring out the back window looking at whomever was right behind me. During one traffic stop an amused state patrolman asked me if I ever put him up in the front seat in order to get in the HOV lane, naturally I told the officer no and that would be against the law! Within the car club we frequently hung out with, I was known as that-guy-who-has-Animal-in-his-car.

Shortly after winning/buying Animal, we took him all around our apartment and did a silly pictorial and this is how Animal ultimately wound up in the the back of my car. It was a fun couple of hours we took a gazillion pictures and narrowed it down to these best few: 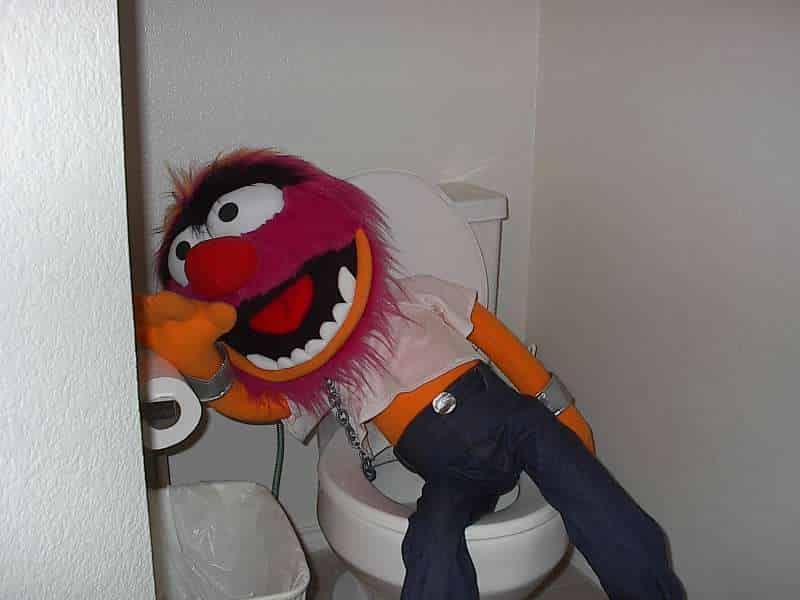 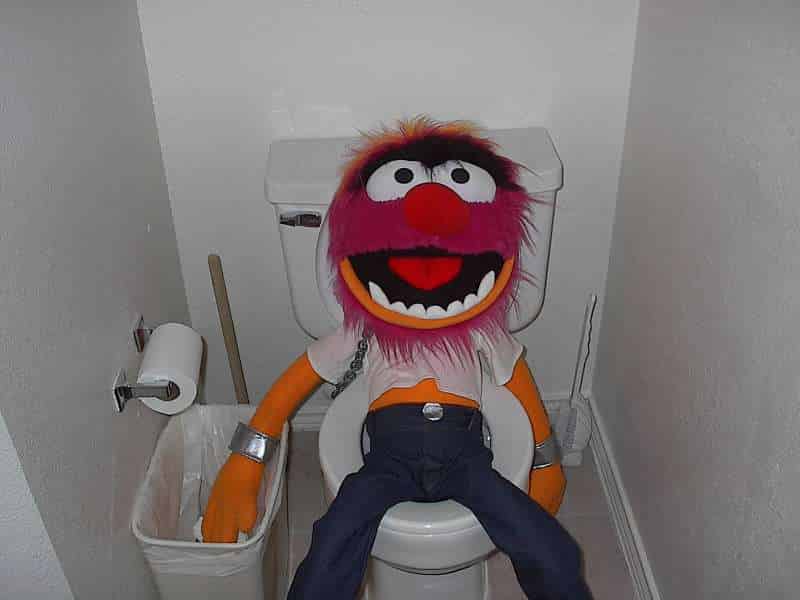 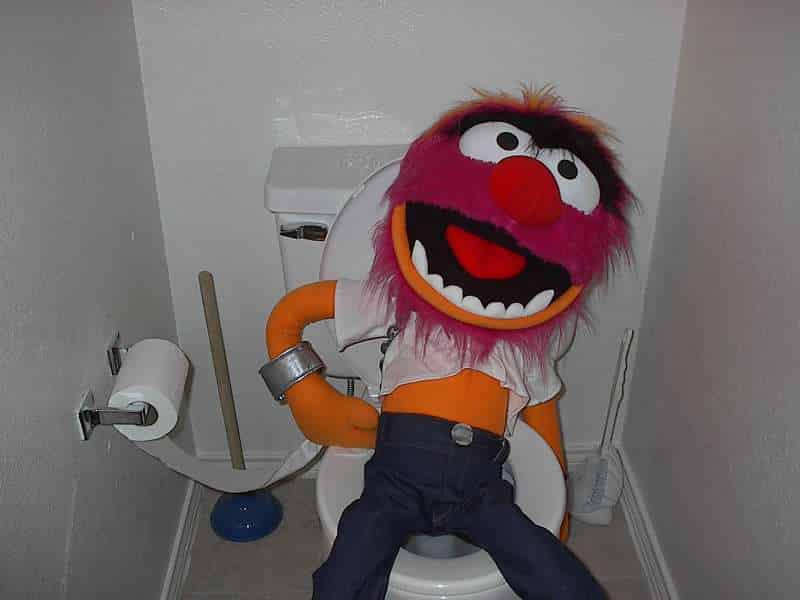 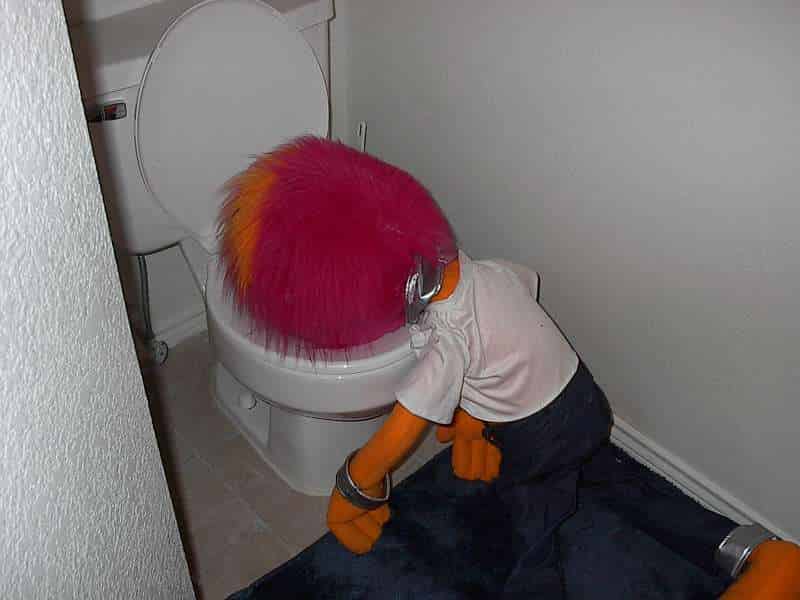 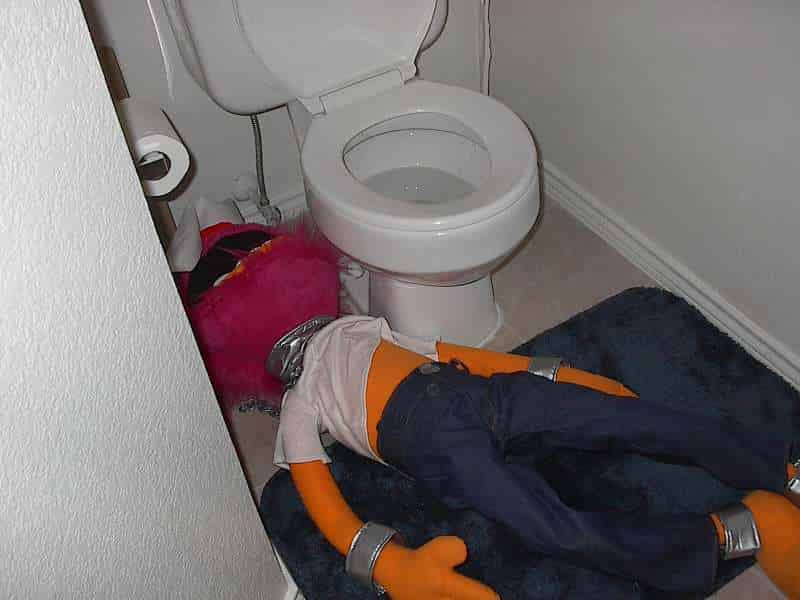 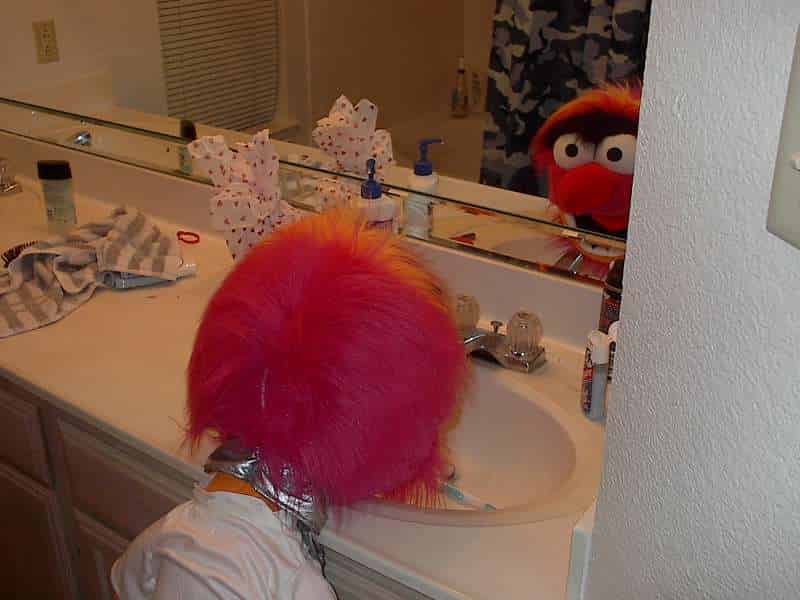 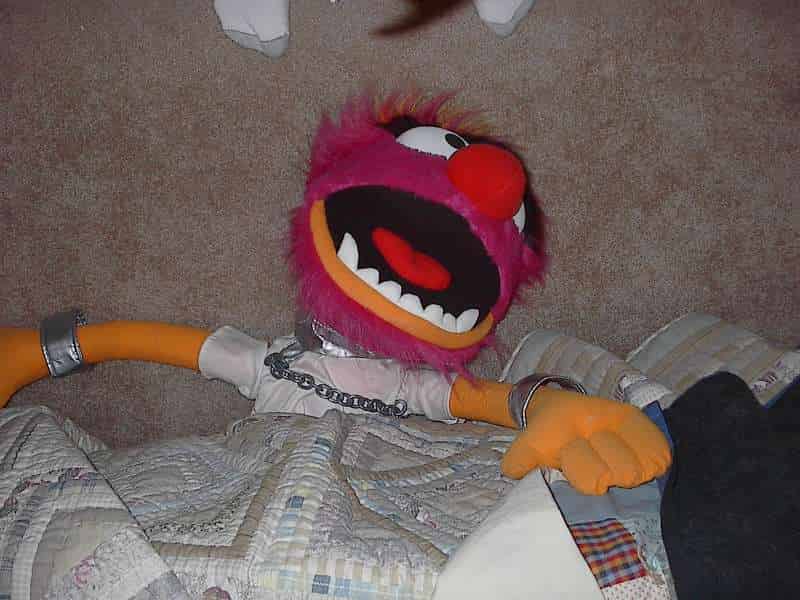 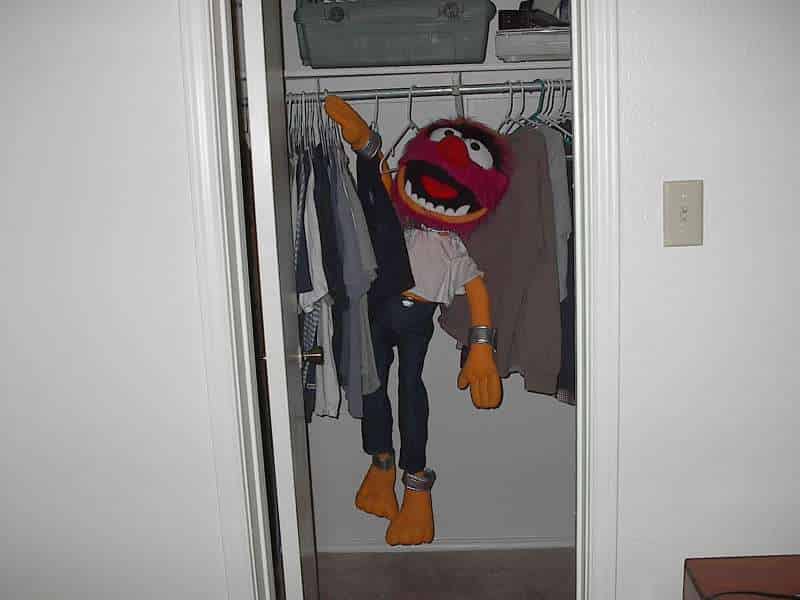 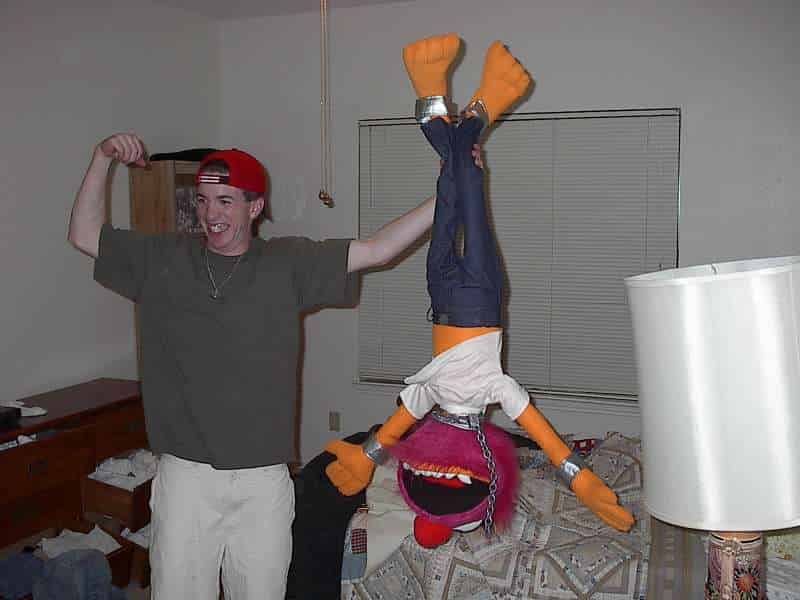 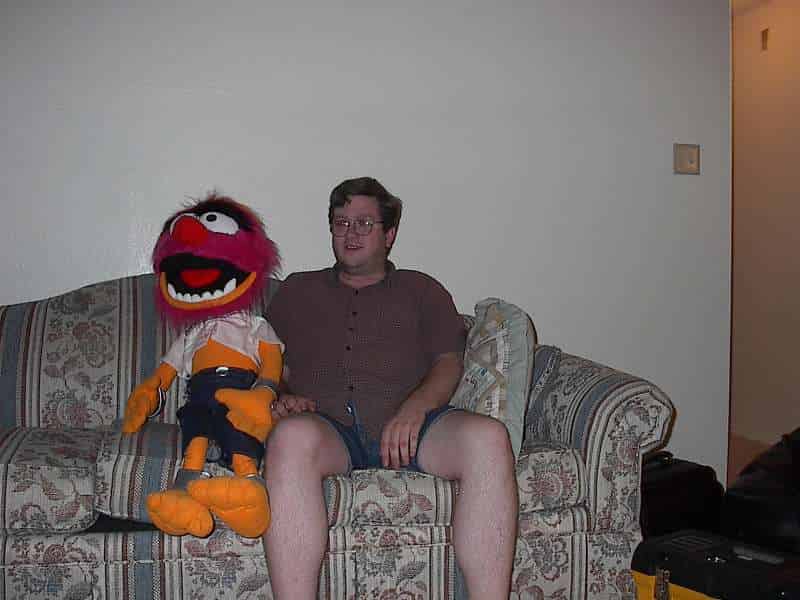 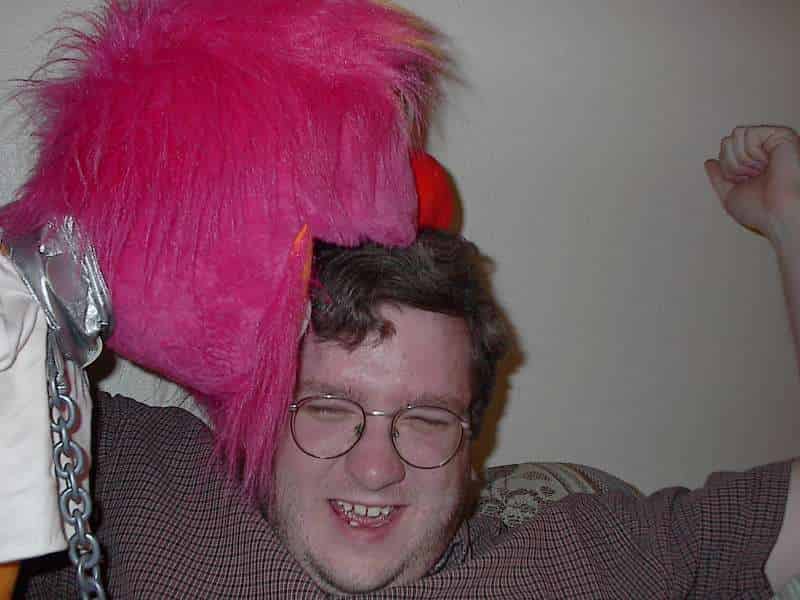 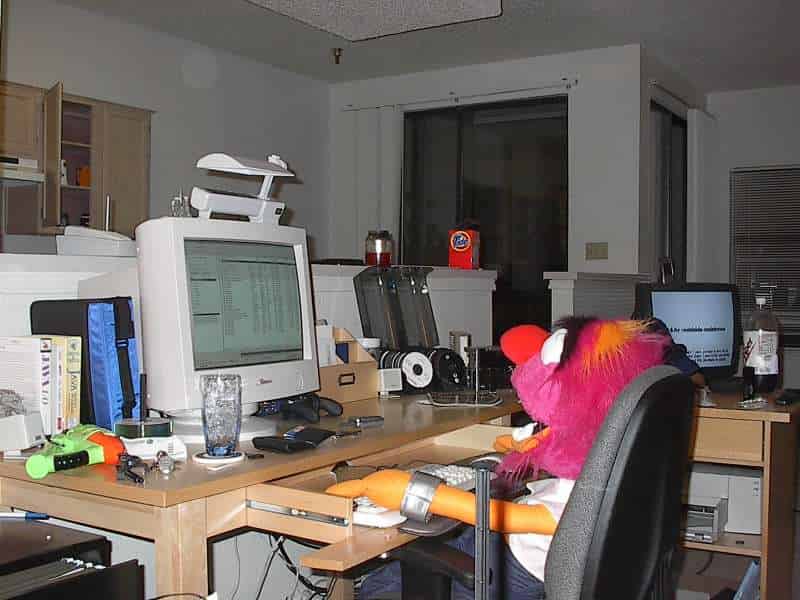 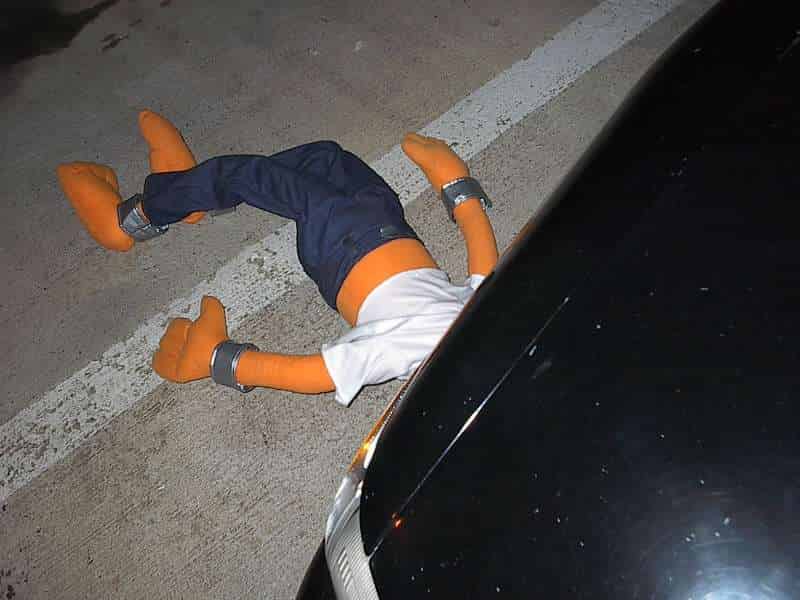 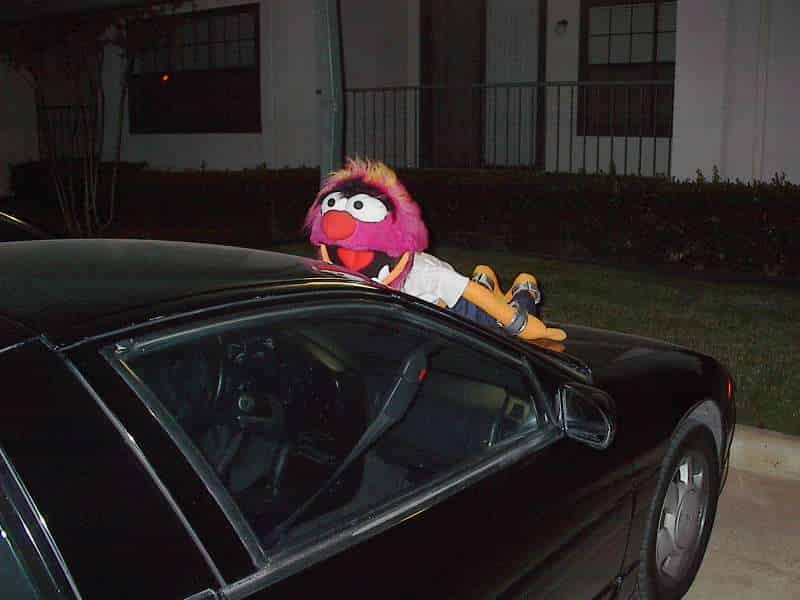 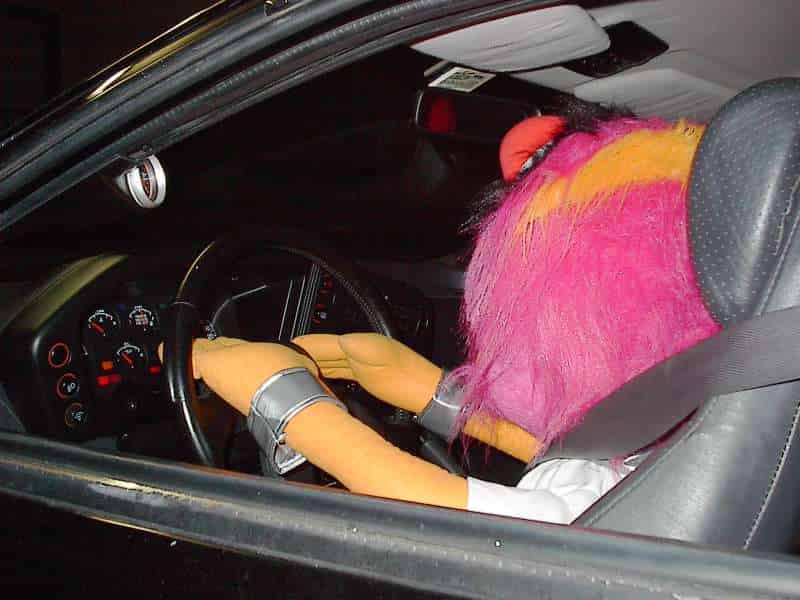 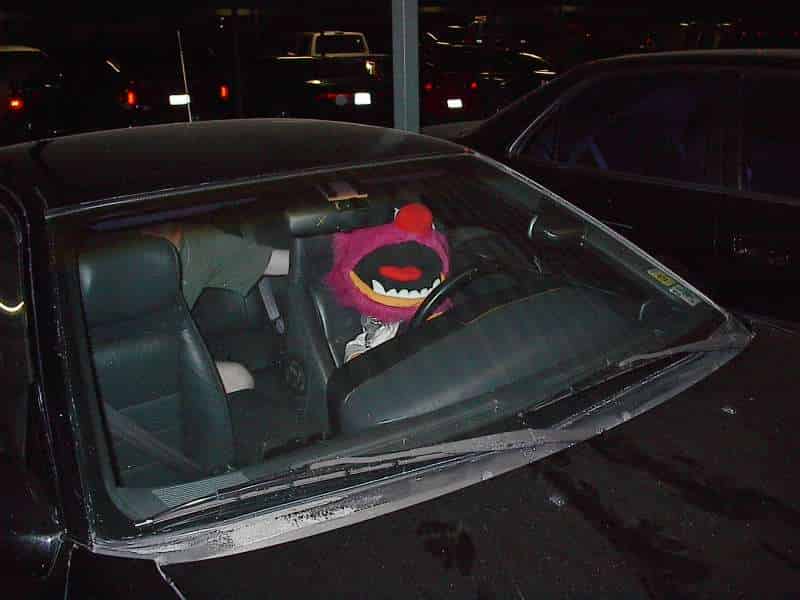 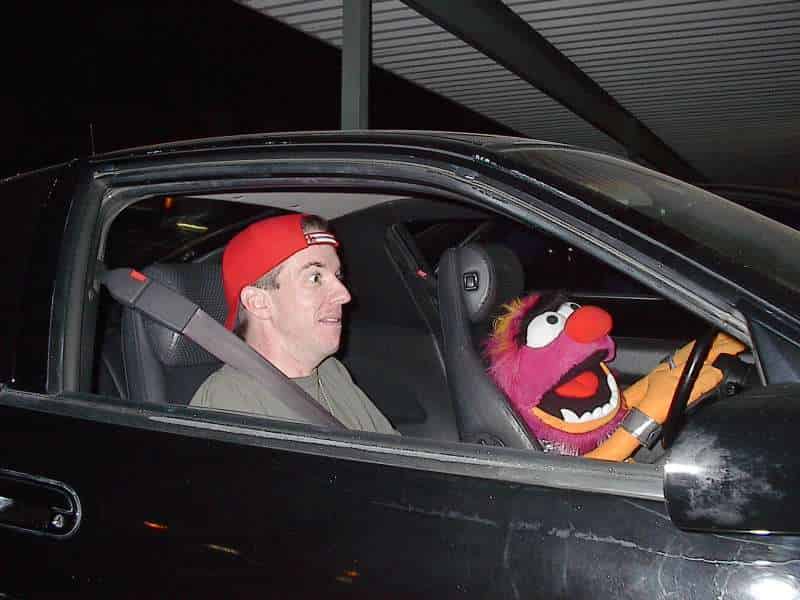 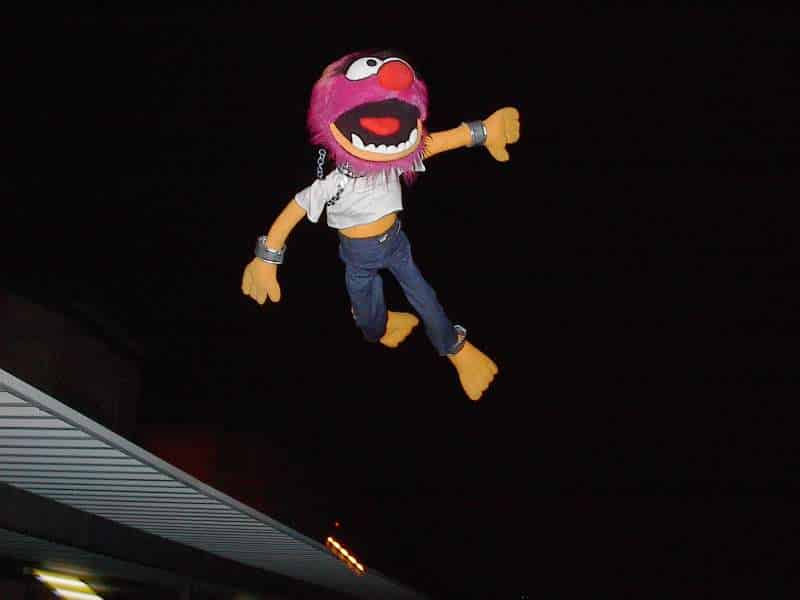 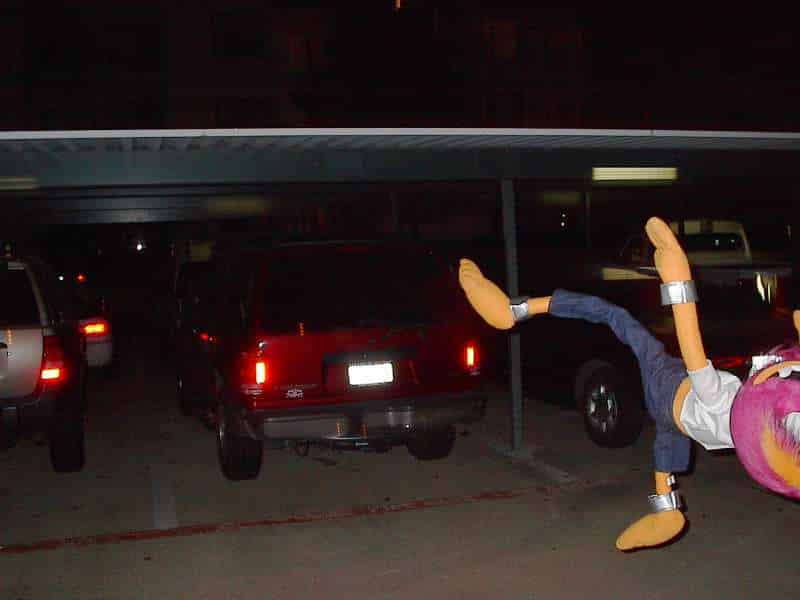 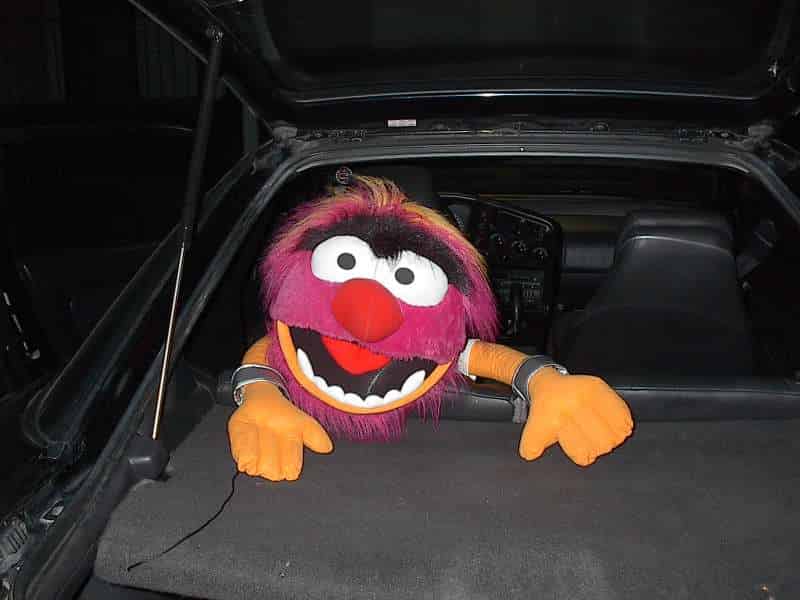 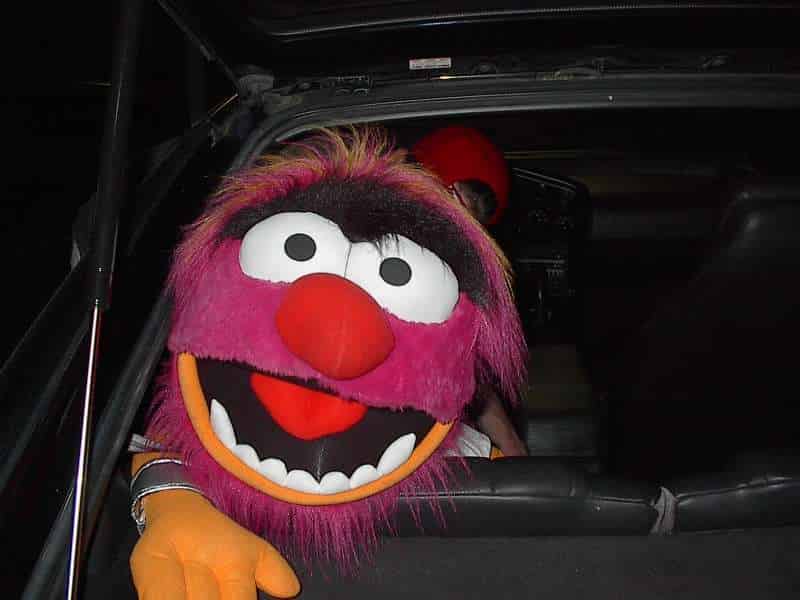 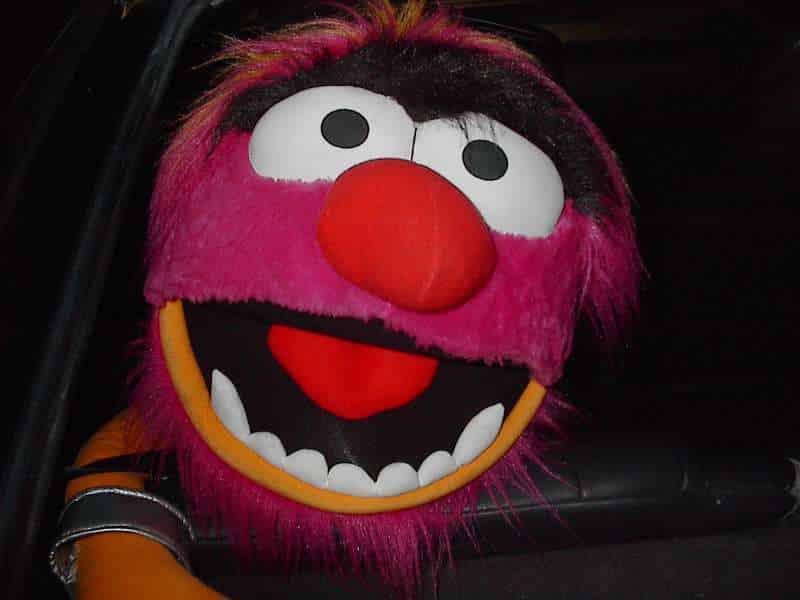