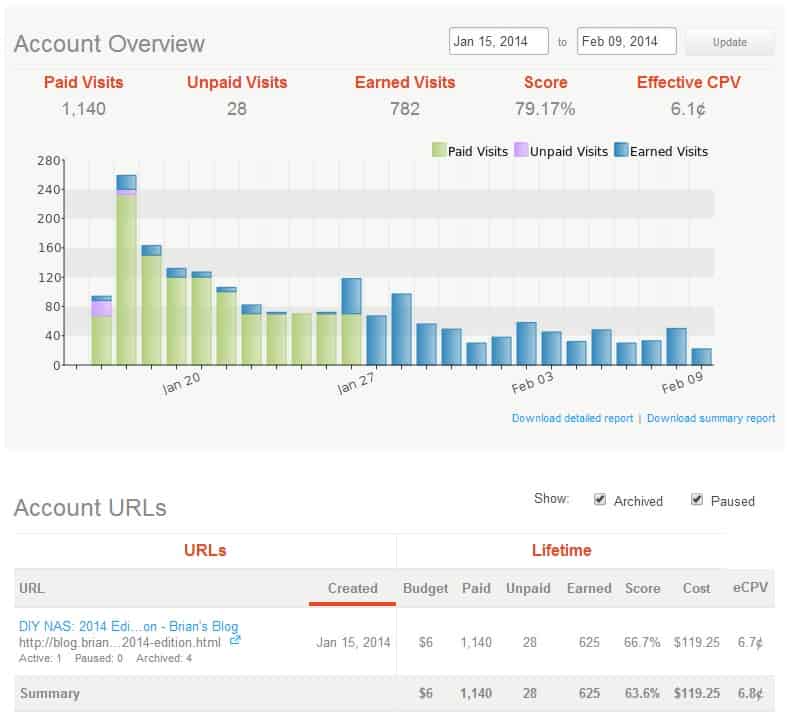 A friend introduced me to StumbleUpon what seems like almost a decade ago but probably isn’t nearly that long ago. I wrestled a bit with trying to define StumbleUpon and decided to just poach this from the Wikipedia page: “StumbleUpon is a discovery engine (a form of web search engine) that finds and recommends web content to its users. Its features allow users to discover and rate Web pages, photos, and videos that are personalized to their tastes and interests using peer-sourcing and social-networking principles.”

The long and short of it, users select categories that they’re interested in, and StumbleUpon feeds you pages from those categories. As you find pages that you like or dislike, you can thumb them up/down, and that will influence whether pages of that nature are presented to you in the future. There’s also a social aspect to StumbleUpon, as you’re more likely to be presented pages from categories you share in common with your friends and that they also liked.

As you surf the Internet outside of StumbleUpon, you may find a page that you like and it hasn’t been discovered yet by StumbleUpon or its users. A quick thumbs up from your toolbar and the page gets added to StumbleUpon based on your discovery. Naturally, StumbleUpon also allows for “Paid Discovery” as a source of income and an alternative method of content discovery.

As a teeny, tiny little blog, I’m quite keen on ways to drive more traffic to my site. Those of you who have connected with me on the various social networks should notice that I’m pretty religious (but hopefully not overzealous) of shouting from the mountaintops each time I’ve published a new blog. I’m always excited when I notice that one of my blogs has been liked, re-tweeted, shared, etc… I’ve often wondered what would happen if one of my blogs went viral. The closest I’ve come is when my blog about my revenge on relentless telemarketers stayed relevant on the /r/humor sub-Reddit.

On a lark, I decided to try and see if I could re-create something similar by buying Stumbles. What I was hoping, was that I’d get a few more eyes on the blog, which would generate a few more likes, which would get more eyes on the blog and so on and so forth. When I recently blogged in my most popular category of blogs, I created a campaign on StumbleUpon to promote that blog.

Within the campaign, you pick your target audience and the categories you wished for your page to be displayed on. Early on in the campaign, I made the mistake of being way too broad with the targeting of my promoted page. As my funds dwindled, I focused this down specifically at what I thought my demographic would be and I got better results.

There’s also an option to pay a premium for “engaged” stumbles. I had hoped that an “engaged” visit included the user liking (or disliking) the page, sharing the page with another StumbleUpon user or following one of the links within the page. What I found is that StumbleUpon also considers any visit over five seconds as “engaged.” Upon learning of that, I decided to discontinue the extra money per visit for engagement. I simply don’t consider a visit of five seconds as “engaged.”

Early on, my results were actually pretty disappointing. I was getting a lot of traffic, but all of it was really low quality. Very few of my StumbleUpon visits were spending more than a few seconds on the site. It was horrendously rare that they followed any of the links in the page, and none of the hundreds of visitors had liked the page. I take blame for these poor results early on, as I had been far too broad both in my target market and with the categories that the page was getting presented to.

As I mentioned, I decided to stop paying a 50% premium for “engaged” visits and to completely narrow my target market and categories down. I picked only a couple of categories and changed my target market. Upon making that change, I had some encouraging results. The average stumble was still a quick drive-by, but I started noticing that the page was accumulating additional likes. I’ve never had any of my blogs accrue more than 10-12 likes, but at the end of my two-week campaign my blog had collected 16 total likes, and I hit some threshold where I’ve continually seen 10-20 referrals from StumbleUpon on this page since the paid campaign ended.

So is it worth it to pay for a Stumble? Or a better question, is it more effective than other forms of content promotion on the web? To be completely honest, I just don’t know. I don’t have very much experience with any forms of paid discovery. At one point, I received $100 of credit to use on Google AdSense and I don’t remember that having a very measurable impact on what I wound up promoting. This is not an arena in which I can claim much experience or expertise.

However, I think it’s worth pointing out that I definitely had positive results that I felt could be quantified. The promoted page is now by far my most viewed and most liked page submitted to StumbleUpon. I’m not sure that it’s a viable way of promoting a new article being published to the blog, but it’s certainly been a fun experiment to give it a try. If anything, I’d be willing to spend a few dollars per article just to see the data on the graph above for the articles that I’ve authored and submitted to StumbleUpon. Promoting every blog does not seem to make much sense, but under special circumstances I’d be very willing to spend some money in order to get those blogs out. I just need to remember to be more specific and targeted with regards to the audience and the categories its promoted to.