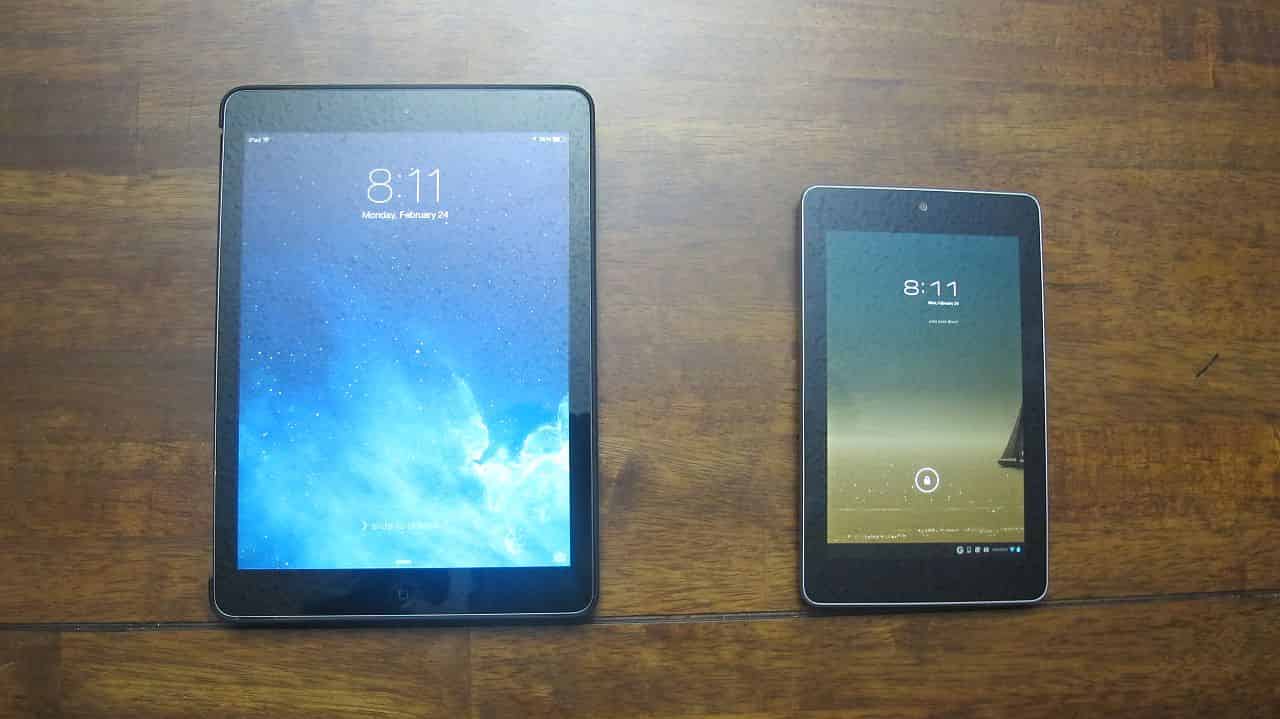 I have been experiencing a problem the past couple years with my smartphones and tablets. Each time I upgrade my smartphone to newer hardware than my tablet, or vice versa, I pretty much abandon the older device. I’ve always attributed this to the age of the hardware, but I’m beginning to think it’s more a matter of size than anything else. My tablets have generally been smaller. I started out with the original Samsung Galaxy Tab 7.0 as my first tablet, and not too long after that I was an early adopter of the first Nexus 7. Because I’ve been buying bigger and bigger smartphones, I began to find that whichever of the two devices was more powerful, I would use it in place of the other device. Case and point, my darling wife Julia gave me an early Christmas gift when the Nexus 5 came out. For the most part, my Nexus 7 sits uncharged and neglected on a coffee table at home. There’s nothing wrong with the Nexus 7 it just lacks the horsepower that the Nexus 5 has, and the size advantage of the Nexus 7 is easily mitigated by that performance difference.

When in Doubt, Buy a Bigger Tablet

In recent weeks, I’ve been thinking about my neglected Nexus 7, thinking that if it were just a little bit bigger, I’d use it more often than I am. I’d even entertained the thought of buying something like the Nexus 10 but in comparing the Android Geekbench scores, I was a bit worried about paying four hundred dollars to buy equivalent hardware and a bigger display as my Nexus 5. If I wanted more display real estate for the same price, I could’ve bought an additional 27” 2560x1440 IPS display and a video card to drive it for my desktop computer. I just couldn’t honestly justify spending the money on the Nexus 10.

Thankfully, my Christmas present to myself was a new job this year. At work, they believe that 80% of the decision-making executives of our clients are iPad users. Because our company provides software-as-a-service, there is an emphasis on making sure that our web-apps work well on iOS devices, especially the iPad. They instituted a program where the company contributes money towards the purchase of iPads in the form of an Apple Store Gift Card, and negotiated corporate discounts. I’m usually pretty oblivious to when the planets align like this, but in this case the light bulb immediately went off above my head. I’m a pretty dedicated Android guy but in this case, it was too good to pass up on an iPad Air at an extremely discounted rate. My out-of-pocket for the 16GB WiFi version of the iPad was roughly $200 plus tax. My bottom line ultimately was an iPad Air at the same price out of my pocket as the latest Nexus 7.

Aside from an early wave of “Why doesn’t this work like it works in Android?!?!” confusion, most of my first thoughts naturally related to the size. I have a couple initial observations about the size:

It’s difficult to type well and hold at the same time. I imagine that much of this can be attributed to what I think is an awful keyboard in iOS devices. The iOS keyboard pales in comparison to the current Android keyboard and is downright rudimentary when compared to aftermarket Android keyboards like Swype. The 10-inch form factor of the iPad Air includes enough added weight and size that I don’t think I could easily hold the tablet in one hand and type well with the other like I currently do with my Nexus 7. However, I could very easily rest the tablet in my lap, hold it with one hand and type with the other if the iOS keyboard weren’t so bad. Hopefully this is something I get acclimated to with use.

This shouldn’t be a surprise that it’s on the list, but I am disappointed it’s not the first thing that came to mind. Regardless of its ranking it makes a tremendous difference in comparison to the 7-inch tablet. Even though I had my TV on, my Chromecast ready to go and the app installed on my tablet, I watched an entire episode of House of Cards to kick off a 5-6 episode marathon this week on the iPad and enjoyed watching it—not nearly as much as I did when I watched the next few episodes on my television, but the fact that a 10-inch tablet can compete with a television is impressive.

My main objective here is to see if there’s a niche in my mobile computing for a 10-inch tablet that survives when I get my next phone upgrade. Considering that I’ve bought a new phone and tablet, their latest editions respectively, in the past couple months, it might be quite a while before I get to put this theory to the test. I guess how much I set down my Nexus 5 and use the iPad Air over the next few months will suggest how much weight that extra screen real estate actually carries. Additionally, I’m curious to find out if the 10-inch tablet is enough for me to break me away from my desk when working on writing things for the blog. My experience using the keyboard app on the iPad has been disappointing so far and I get the impression that if I had a Bluetooth keyboard, I’d need to sit at an actual table to do any work which is a bit defeating. If I have to sit at a desk to use a “real” keyboard with an iPad Air, then why not just go over and sit down at my desk? I have a sneaking suspicion that a Chromebook may need to supplement my 10-inch tablet to meet all of my mobile computing needs. 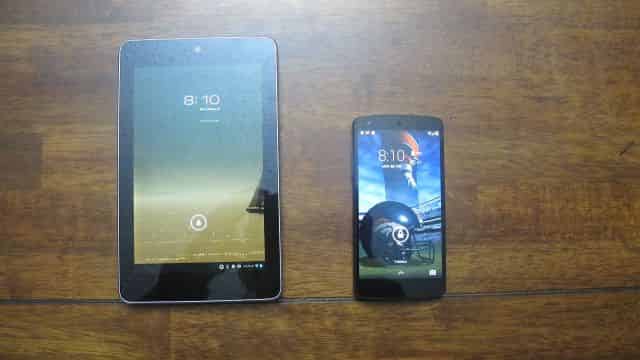 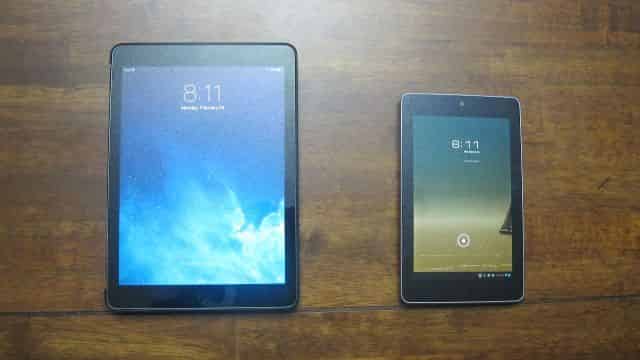 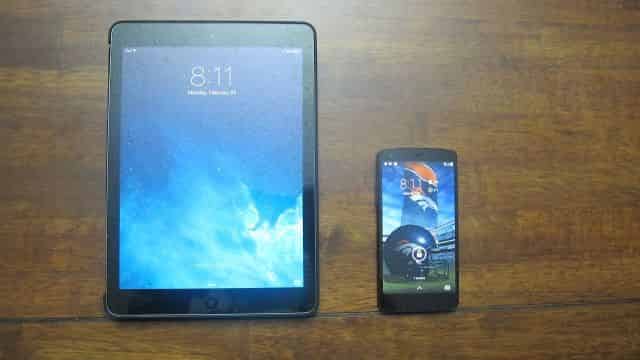 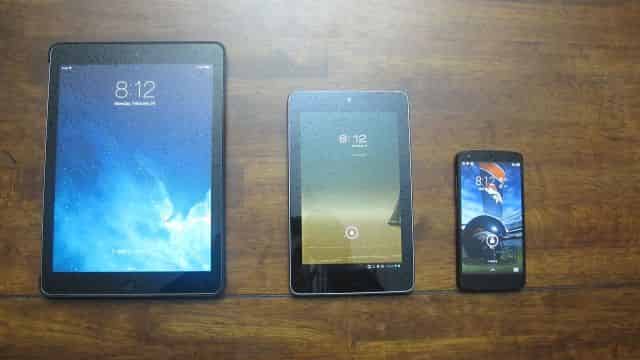 Note: That is not some weird lumpy texture on each of the phones/tablets, it’s the reflection of the 1970’s popcorn ceiling that’s directly above it!