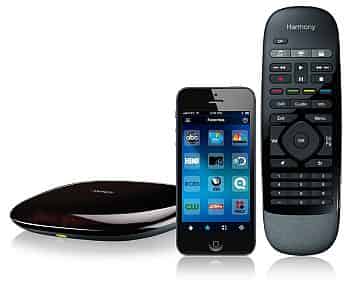 For Christmas this year, I asked for a Logitech Harmony Smart Control for Christmas and my dearly beloved wife was happy to oblige. I’ve been a longtime user and admirer of Logitech Harmony universal remotes, having used both the Harmony 650 and Harmony 550 in recent years. I’ve been a big fan of what I boasted to my peers as “Finally, a universal remote done correctly.”

For those of you with Universal Remote experience, it’s typically been a frustrating experience of blindly punching in multitudes of product codes never finding quite the exact code for the device you’re wanting to control and not having the full functionality of your original devices’ remotes. The Harmony remotes are refreshing in that much of that setup is done through software on your computer with a considerably more comprehensive database of products. Furthermore, programming an activity has been convenient and simple. I don’t have a very impressive home theater setup, but I thouroughly enjoyed being able to sit down and press a single button to listen to music, watch TV, watch Netflix on my Chromecast, or play a game on either of my game consoles.

When I saw that Logitech was offering a new line of Harmony products which were WiFi enabled and included an app for controlling your home theater devices from your smartphones and tablets, I was excited again. I’ve been pleased with using my android devices to control the Chromecast and I’ve wondered just when exactly we’d see people start replacing remote controls of all kinds with those devices. Personally, I think smartphones and tablets are still a bit dense in order to make a great remote control for your television, so I was pleased that a traditional remote continued to be supplied with the new Harmony products.

First thing after opening gifts Christmas morning, I was looking forward to playing with my new toy.

Setup was pretty easy; the Harmony Smart Control included the remote control, the Harmony Hub, an infrared (IR) repeater and a small power supply. I situated the Harmony Hub near my TV and plugged it into power. I then put the IR repeater down near my receiver, which sometimes had difficulty getting the reception from my other remotes. I enabled Bluetooth on my smart phone and installed the Harmony app. Once inside the app, it walked me through entering my devices, testing them out, setting up activities, and programming the remote. My device settings were saved up on the MyHarmony website like I mentioned before, a universal remote done correctly.

It wasn’t too long after completing the setup that I noticed that the IR Remote wasn’t working very well. It was sluggish, unresponsive, or just didn’t work. Because I had the option, I’d try with the Harmony app on my Nexus 5. Sometimes that would work, but most often it wouldn’t work either, which was concerning. I began to notice that there was a red LED intermittently on the Harmony Hub and began to worry. Being a geek myself, I did what I always do when something didn’t work: I power-cycled it.cycled it. After powering back up, it worked briefly but then began to misbehave again, which lead to more power-cycles, this time on my WiFi router, my Verizon FiOS router, and my phone. Regardless of what I turned off and back on, that pesky red LED kept coming back, and the Harmony remote just wasn’t working.

This is when my concern escalated into Google searching, which seemed to suggest that the red LED meant that the Hub was losing connectivity to the WiFi network. Some further research lead me to this 20-page thread on Logitech’s support forums about the Harmony Hub losing connectivity. I read each and every post, sympathizing with the people in the very same boat, and I began to wish I’d researched the product a bit before putting it on my wish list for Christmas. The thread was full of lots of people trying lots of different tips to try and resolve it. I tried nearly all of them:

Quite literally the only thing that I didn’t do that people said they had luck with, was to buy specific routers that people had bought. Inside the thread, a few people had reported luck with the ASUS RT-N66U. To be honest, I was tempted to do it too, but I couldn’t justify spending $150 on a router to get a a $100 Universal Remote working on my meager home theater. Furthermore, I have what I believe to be a nice router already. It’s from the family of DD-WRT routers running Tomato. In our household, we’ve got probably almost a dozen different WiFi devices which we’ve all used in the past without any kinds of problems with the WiFi. Furthermore, I can’t remember any kind of houseguest not being able to easily connect to and use the router themselves.

After my troubleshooting and sacrifices didn’t result in resolving the issue, I resorted to emailing the Logitech Harmony Support team, hoping they had access to some sort of arcane magic that would get the Harmony Hub working. I detailed out what steps I had tried, the forum post that I had researched, and stated that I didn’t think it was reasonable for anyone to have to replace a perfectly functional router in order to get the Harmony Smart Control working with their WiFi networks. WiFi has been around far too long for there to be such poorly designed devices running around. Because I sent it in an email, I didn’t expect an immediate response, but the auto-response promised a reply within 48 hours. Four days later, I finally got my response.

Before I go on any further, I’ve worked these kinds of jobs. My first full-time job two decades ago was taking these kinds of phone calls on inkjet printers, and since then I’ve worked at a number of places providing support to end-users on a variety of products. I know that 99.9999% of the solution is just getting on a common wavelength with the customer.

All this being said, I was aghast at the response that I received; an obvious copy-and-paste hatchet job based off of the subject of my email, without any consideration to the details that I provided. Logitech’s response to my problem was to essentially tell me to do what I’d already told them I did again and let them know if those steps didn’t solve my problem. Nothing is more infuriating than to be frustrated with a product, ask for help and then get a response where it’s clearly the case that they didn’t even bother to read what you had written in the first place. Rather than wait another four days or longer, I told them I wasn’t interested in their help if they weren’t going to bother reading what I said.

As a last gasp, I enabled the WiFi on the Verizon FiOS router that I’d disabled ages ago and hadn’t been using. I completely reset the Harmony Hub, re-paired it and had it use that new SSID instead. It’s only been two or three days, but I haven’t had any WiFi disconnects since then. Because it’s a gift from my wife, it has sentimental value, otherwise it’d be in the refunds pile at the nearest Amazon distribution center and we’d be buying a different universal remote control, quite possibly something that’s not Logitech.

I hate doing this, but I can’t recommend this product to anyone. In fact, my advice is to stay miles away. The Harmony Hub was poorly designed and tested, which is evident by the number of people with different routers all having the same WiFi connectivity problems. Furthermore, the fact that a lack of WiFi connectivity also stops the IR remote from working correctly doesn’t bode well for the product either. As much as I have loved the Harmony Universal Remotes, my suggestion is that you stay far away until they’ve resolved their WiFi connectivity issues and they’ve integrated an Ethernet port on the Harmony Hub itself.

For those of you willing to fight through the connectivity issues, the awful customer support and the potential expense of finding and buying a compatible router, my feelings about the actual line of remotes are still the same. It’s a Universal Remote control done perfectly, it’s just too bad the same can’t be said for its network connectivity. Read through the support thread to gain an understanding of what looms for you in the future.