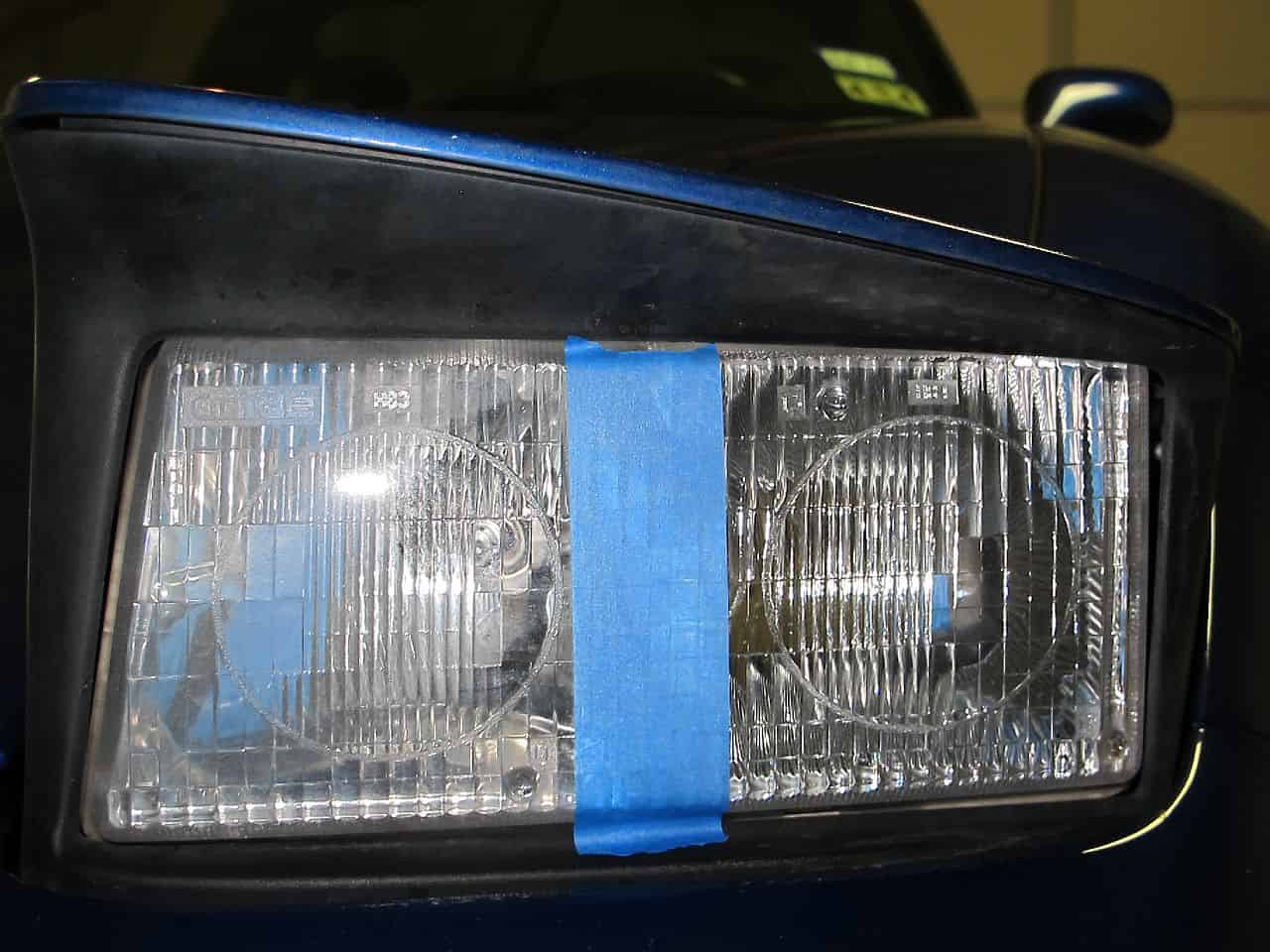 Roughly about a year ago, I was car shopping to replace my ‘04 Mazda RX-8 and decided that I’d buy one of my all-time favorite cars, the Chevrolet Corvette. Because I couldn’t quite justify the expense of a new Corvette (or for that matter, just about any new car), I wound up buying a 2002 Chevrolet Corvette Z06. It’s been a tremendously impractical purchase that I’ve loved just about every minute of.

As a boy, one of my favorite features of the Corvette was the pop-up headlights. To this day I still think that pop-up headlights are quite cool even though they haven’t been included on the last two generations of Corvettes. Pop-up headlights are one of the reasons I decided to buy a 5th generation (C5) Corvette instead of a 6th generation Corvette (C6). One of the first nights of owning the car, I wanted to show my wife this nifty feature, so I pulled my car outside and asked her join me in the passenger seat. I twisted the headlight switch and pointed excitedly as they rose up out of the hood. My wife turned to me incredulously and remarked, “That’s neat, but are your headlights even on?”

Her observation was practically correct, and compelled me to get out of the car and check whether the lights were actually on or not. It’s virtually the only time that I can recall being disappointed in the car; the headlights were just awfully dim. Over the past year, I wound up doing a bit of research and learned that this wasn’t specific to my car it’s a very common complaint for the C5 Corvette. With the recent onset of daylight saving time, my hourly commute home from work is now done in the dark, and it sparked me to wonder how I could upgrade the headlights and make them brighter.

Over the years, the plastic on headlight lenses gets pretty dingy. They accumulate grime, get nicked up and can yellow pretty significantly. Understandably, this film can soak up a good chunk of the light emitted by your bulbs, and dim the headlights. That’s why at your local auto parts store there’s almost an entire shelf of different lens-restoration products and kits out there. I was pretty surprised at the cost of these products and kits, considering my experience about a decade ago before these products were so common. I had purchased a 1992 Eclipse GSX, and its headlight lenses were absolutely yellowed and in pretty atrocious shape. A good friend suggested that I buy some Turtle Wax Polishing Compound and to apply that by hand to clear up my yellow headlight lenses, and it worked like a charm. Considering that the polishing compound runs about $4, it’s a much better deal than the headlight-restoration products that start at $8 and go up to $30-40 for the full-on kits.

The headlight lenses on my Corvette aren’t really all that bad. The previous owner had taken pretty good care of the car, and the place I bought it from had it pretty much in showroom condition when I bought it. However, considering how bad the stock low-beam bulbs are on the Corvette, I thought the $4 and a bit of elbow-grease would pay off even if there was a tiny bit of improvement to the lighting. I was surprised at the before-and-after pictures at how much clearer the lenses wound up being.

I figured the best step would be to address the bulbs. In researching the bulbs, I felt like I had a few alternatives:

I decided against HID lights because I’m not the biggest fan of the temperature of the lights, the cost/effort in converting, and I frequently hate seeing them approaching me or in my rearview mirror. The low cost of modifying a standard high-beam bulb to fit into the low-beam socket was somewhat intriguing, but ultimately I wound up choosing to go the route of the Halogen Infrared Reflective bulbs. I chose HIR bulbs because of the numerous reviews I read of people in the same boat as me, wanting brighter lights without having to go nuts with some sort of HID conversion kit.

HIR bulbs are a bit magical; they’re coated in such a way that infrared radiation is reflected back at the bulb’s filament and allows the filament to be superheated without any additional increase in power consumption. They are similar to the 9005 and 9006 bulbs from the Corvette in every way except for one: the plastic tabs at the base of the bulb don’t quite align to fit right in. I’m still a bit confused as to why this is. If I were manufacturing these bulbs, I’d want any of the cars which use 9005 or 9006 bulbs to drop these bulbs right in. But, since that isn’t the case, it’s a simple task to grab a pair of fingernail clippers and trim the HIR bulb’s plastic tabs down to fit into the existing hole and to twist right into place.

To replace the old 9006 low-beam bulb, I picked up the Phillips 9012 HIR, and to replace the 9005 high-beam bulb, I picked up the Phillips 9011 HIR. Cutting the tab down to fit into the hole was pretty simple, but we were pretty conservative so it took a few different tries to get it right. It also didn’t help that someone before me had brute-forced one of the low-beam bulbs in, and we had quite a bit of problems getting it removed.

Had I really wanted to make the most difference in the lighting, I could’ve picked both options #2 and #3 by further modifying the 9011 bulb to fit into the 9006 socket. The difference between the two bulb types is that the low-beam socket has a single groove that the bulb has a matching stub for, and the high-beam socket has two of those grooves with two stubs on the bulb. Filing down both of those stubs on the bulb would allow the high-beam bulb to fit into the low-beam socket. The brighter high-beam bulb would still be pointed downwards and shouldn’t have caused much concern to other motorists. I strongly considered this option, but I was too impatient and didn’t want to order new bulbs and exchange the others. 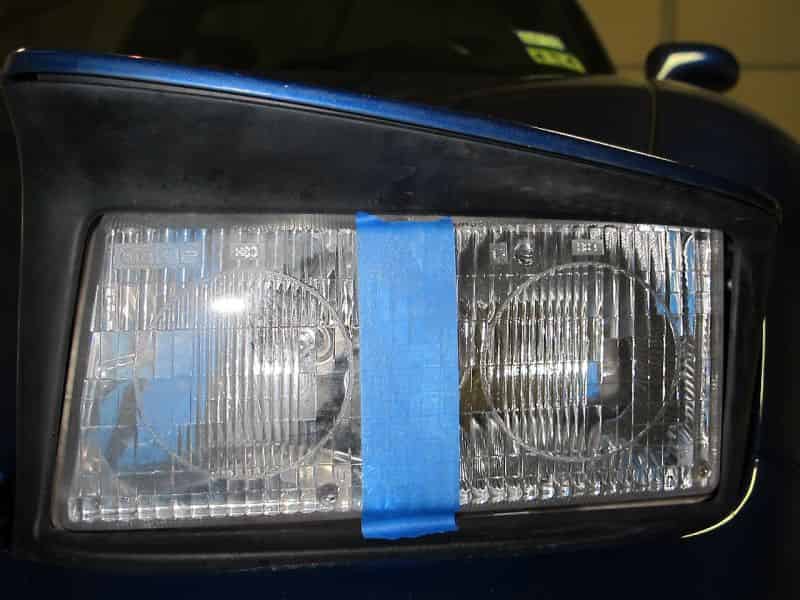 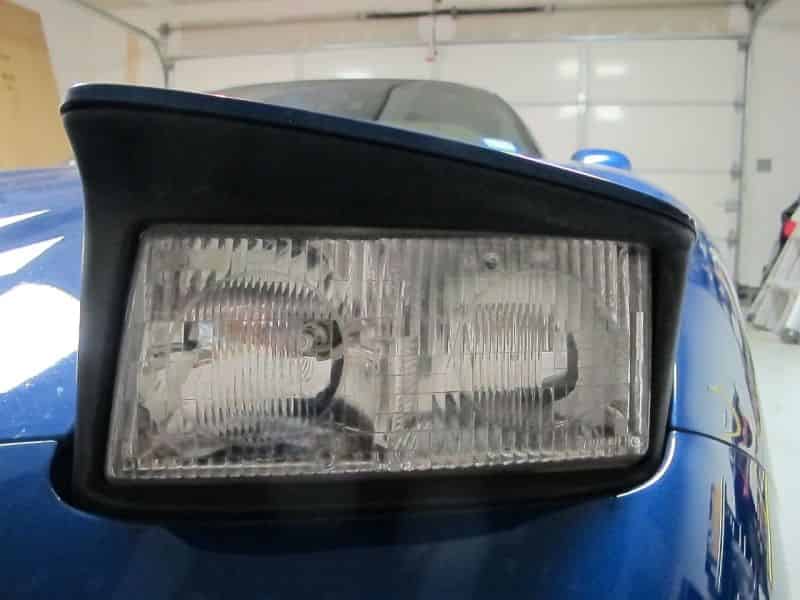 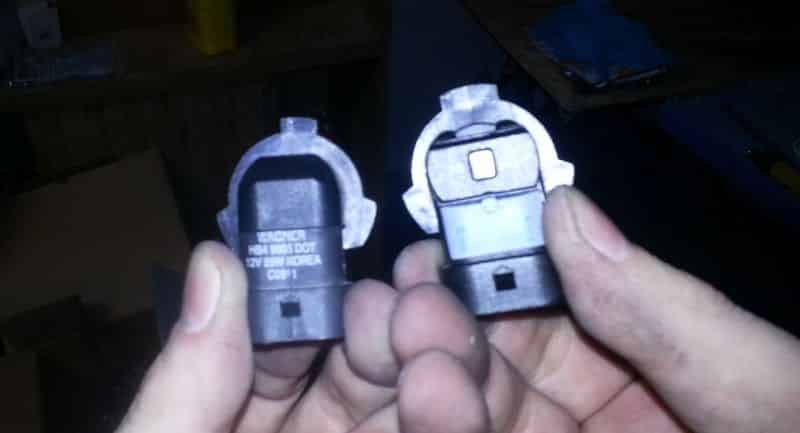 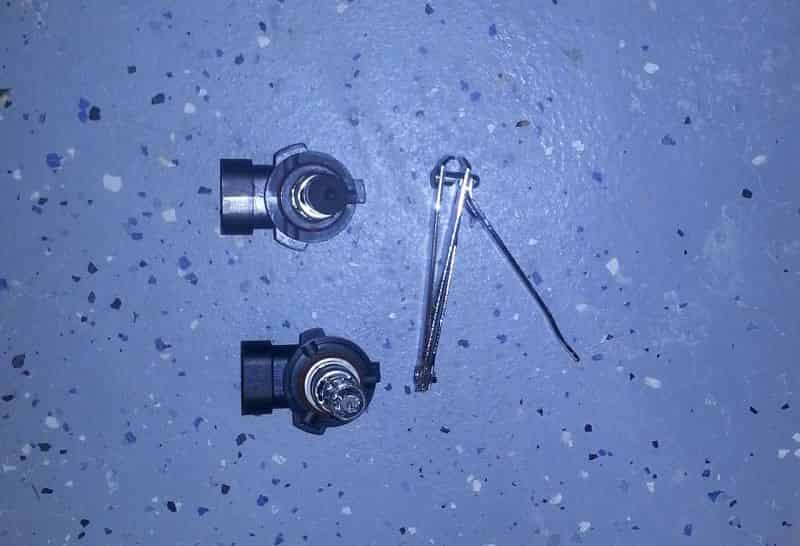 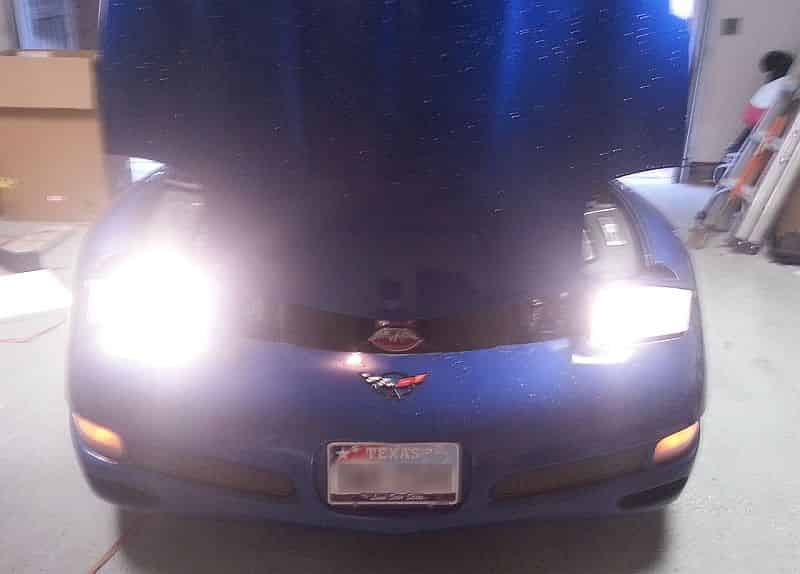 Polishing the lenses certainly provided some benefit, but it wasn’t really all that noticeable with regards to the lighting. The improvement to the Corvette was mostly a minor cosmetic change. However, the new 9012 and 9011 headlight bulbs made a remarkable difference in my night driving. The Corvette is now at least on par with the other vehicle in the household and every other car I’ve driven in the past. Considering how dismal the low-beams were before, this is a pretty impressive improvement. The best part about this upgrade is that it’s not even Corvette-specific; any of the millions of vehicles using a 9006/9005 bulbs could be upgraded to use 9012/9011 bulbs.