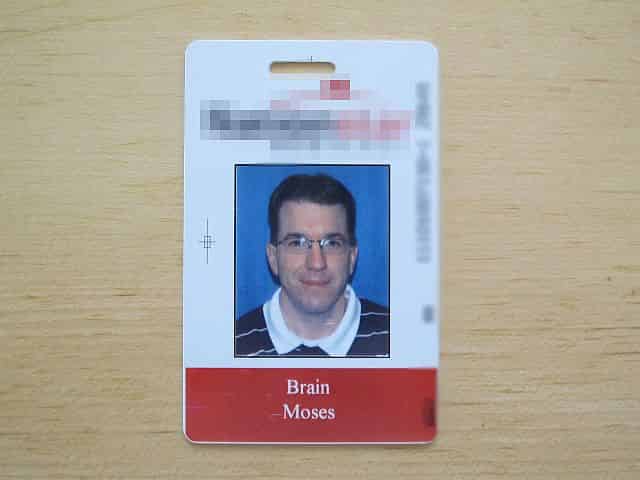 It’s been happening all of my life, I’ve been receiving; junk mail, forms of identification, security badges, tax forms, credit cards, you name it…. all addressed to “Brain.” I remember as a very small kid, my mother would try and spin it saying that it was a compliment – they thought I was so smart they called me Brain, but even back then I knew the truth: people are careless and lazy.

The first time I can recollect this happening was in elementary school. We were in the school library learning about how it works and being tasked with checking out a book when one of my classmates spotted a book named The Great Brain and remarked, “Oh look Brian, it’s a book about you!”

Now in elementary school, I was quite forgiving with my classmates. Even though I perpetually received a dozens of Valentine’s Day Cards, Birthday cards and invitations to various parties addressed to this “Brain” person. Given that I was having my own challenges with learning and writing the alphabet, it seemed then like it was a simple mistake that anyone could make and that we’d all grow out of it.

Boy, was I ever wrong about that. Wrong, wrong, wrong and wrong! I’ve found that it’s gotten worse. It is practically a daily occurrence these days. Especially at work, almost every day an e-mail or instant message comes to me starting off with “Hello Brain,” or “Brain.” I like to think I’m usually tolerant of these lapses in attention, I’m quite empathetic. Besides, “brain” is an actual word learned our automatic spellcheckers, if there’s not a squiggly little red line beneath it then it must be correct. As an experiment, I’ll sometimes respond to those people in kind a transpose two letters in their names. This rarely goes unnoticed, I even had someone at a job in the past respond to me along these lines:

Why do you keep spelling my name wrong, it’s not spelled “Miek”

The day I received that response, I shook my head, left the office early that day and had a drink that night to the decline of our civilization. Our parents were correct, all that TV has rotted our brains.

Also as an experiment, I’ve tried the opposite. I’ve called and referred to myself as “Brain” in all sorts of e-mails. Most of the people who noticed that I was spelling my own name wrong were my friends who knew how badly this can get into my craw. But I did have one co-worker catch it and ask if I was being immodest, this clever coworker had a good chuckle when I explained my experiment but then proceeded to refer to me as “Brain” every chance that they got.

I thought I’d share two instances where I was called “Brain” that were especially memorable; one in the way distant past and another in the present:

In high school, I had joined the cross country team as something to do, my entire childhood I remember my Dad running including running the Long Island Marathon. Running seemed like it could be fun and suited my stubborn persistent nature. My senior year of high school, our family had relocated to another town about 90 minutes away. It was disappointing at the time to move away from all my friends and it was doubly disappointing since I had really gotten serious and dedicated to running and I had put myself in the position to be running with the varsity team. At my new school this wasn’t certain at all. The new school a very competitive cross country program and it became quite apparent that what I had counted on at my previous school was no sure bet.

There wasn’t anything that I could do other than play the hand that I had been dealt. I dedicated myself, worked my scrawny un-athletic tail off and did the best that I could. The hard work paid off in some respect, I was running better times than I ever had before. That entire season, I teetered on the border of the varisty and junior-varsity teams. My best was good and I was pleased with it, but it just worked out that my teammates were both more talented and worked just as hard as I did or even harder.

It was bittersweet during the middle of the cross country season when we wound up participating in the same meet(s) as my old high school did. It was good to see all of my old friends and teammates and as we discussed our seasons it was clear I’d definitely been among the guys on their varsity squad.

As the season ended, I was on the bubble of earning a letter for the Cross Country team. In adding up my accomplishments over the season, I had done the math and realized I was just a hair or two short of the coaches criteria. This was disappointing, but I had accepted it. However, at the team’s end of the season banquet my coach had a surprise for me. He had contacted my old coach and asked him if I would’ve lettered at the old school and the answer had been yes. Based on that, he decided to award me the letter. Naturally, I was ecstatic.

At the same time, my family had planned a weekend trip down to our old hometown for the following weekend. My parents were kind enough to immediately order my letter jacket from the local sporting goods store and we ordered the jacket, and patches for my name to be beneath the left and right pockets on the jacket.

My jacket wouldn’t be ready until the day of the trip down. I was very excited to see my good friends and show off my new jacket. After school that Friday I rushed to go pick up the jacket and upon picking it up I was crestfallen to see “Brain” emblazoned just below the pocket. Here it was, all my hard work paying off and resulting with that misspelling mocking me from the jacket. Thankfully, Mom was quick-thinking and she removed the patches with my name from the jacket and then the next week had them fix the error.

At the end of the year as company’s budgets were finalized I was pursued by a few recruiters about jobs in my line of work. Having been pretty satisfied with where I was at the time, I told the recruiters that I’d interview for those jobs but that my socks would have to be knocked off in order for me to consider the positions.

Luckily for me, one job did just that. I accepted the position and started looking forward to the new challenges ahead of me. To describe my new work environment as a bit chaotic is probably putting it mildly. The company is growing very rapidly in numerous departments, during our little orientation session the HR people said they had 400 people starting new jobs just in the month of January alone. Because of the rush of new employees, some things fell through the cracks. Like a computer, a phone, and security badge. The first week at work involved quite a bit of sitting around and shoulder-surfing my new teammates as they showed me around. It’s impossible to enter the building without a badge, so my first week I’d have to call up to one of my teammates and get them to let me in the building and escort me to the security desk where I could get a temporary badge that still wouldn’t get me into the building.

I was pretty relieved when the security guy sent me an email explaining that he’d been trying to call me but I had no phone extension documented anywhere (it took a couple weeks to get a phone) and that he had a badge for me down at the security desk. I picked up the badge and took it back to my desk. As I joked with my coworkers about finally being a real employee, one of them smirked and replied:

I glanced down at the name on my badge and this is what I saw.

And just this week, this notification came to us about our dog, Crockett’s, need for an upcoming vaccination: 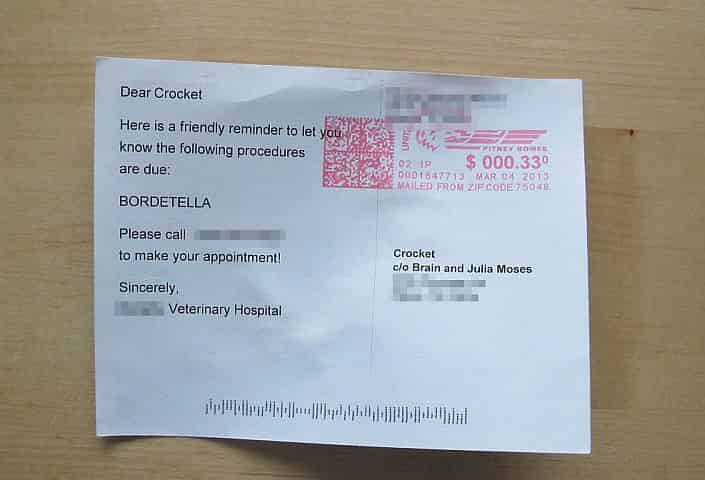 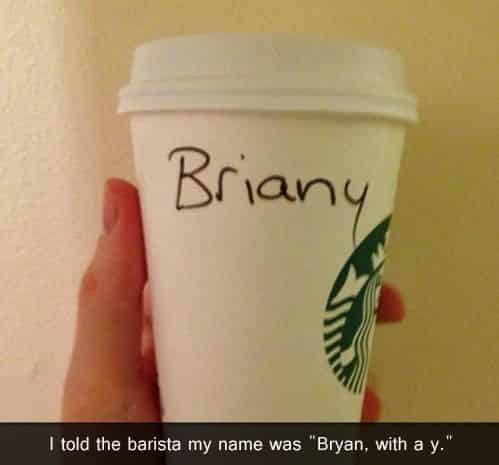