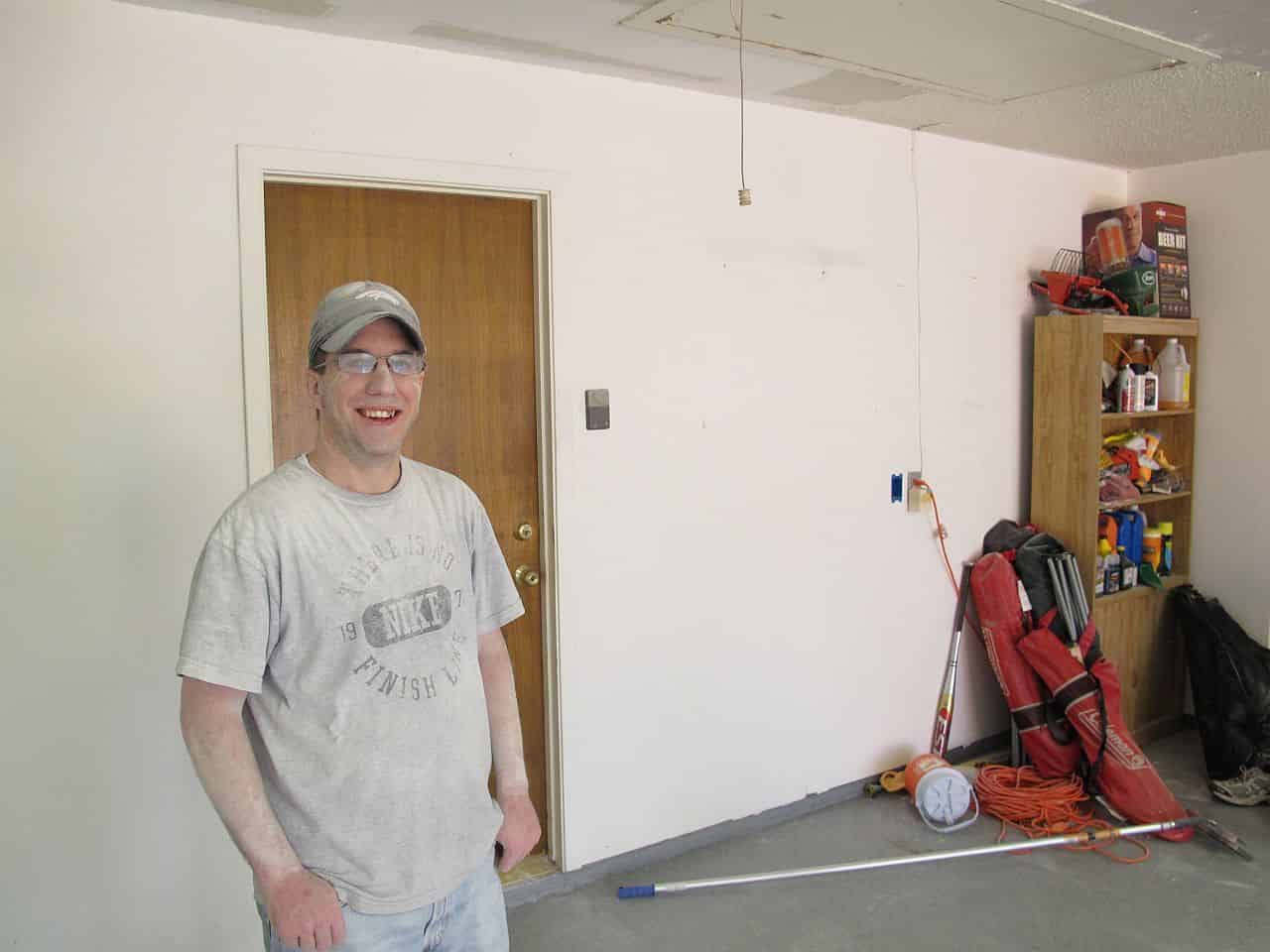 In an earlier article, I described my garage makeover project, phase one of which would be to remove the popcorn ceiling texture that was peeling from my garage. I even got started while writing my first article and posted a few photos of the progress that I had made.

I had helped my parents take on a similar project in their home; they wound up scraping the popcorn ceiling down in their bedroom and retexturing the ceiling. It was because of this that I was emboldened into taking on my own ceiling texture as part of my garage project.

Before getting started, I spent an entire Sunday afternoon at Lowe’s, Harbor Freight and Home Depot looking for a clever tool to use to scrape down the popcorn. Ultimately, I settled on a Ceiling Texture Scraper built specifically for the task and appropriately marked up by thousands of percentages compared to its quality or value. I knew they existed, since my Dad and I had used something similar for their project. You could clip a plastic bag to it which catches a portion of what you scraped, which is also handy indoors. But since I was working in the garage, I didn’t care too much about stuff falling and hitting the ground. This maybe was one of my bigger regrets, but more on that later!

I had some advice from numerous different places that I should wet the popcorn with a variety of different concoctions, but after my first couple swipes of the tool, I knew exactly what lay ahead of me. I suspect that the semi-outdoorsy properties of the garage exposed it to enough temperature and moisture to cause the areas that had blistered and started peeling to come loose. I had hoped that the majority of the garage would be pretty simple to scrape down. Thankfully, I was correct. A couple nice swipes and that popcorn texture was coming right off. The texture came down without any real effort anywhere it was applied to bare drywall.

Everywhere else was considerably less easy. Between every seam of the drywall, the popcorn texture was firmly and permanently affixed. The scraper tool was helpful but it wasn’t very effective. On top of that, it looks like the ceiling has been patched in a couple places and there’s been some sort of faux-popcorn texture (like this stuff in a spray can I decided that I would take a different approach with these areas.

To break up the monotony of work, I would sweep up the fallen texture. You never realize how fine some of the scraping is and how much of that stuff just stays up in the air floating around. Whenever I took “broom breaks,” they seemed to go on forever. I was constantly sweeping and the stuff was constantly falling. I didn’t spend an inordinate amount of time sweeping, but I definitely would have saved around an hour of work if the tool’s garbage bag feature had caught half of it. But even if it had caught that much, there would still be plenty of sweeping and cleaning up to do.

For all of the seams around sheets of drywall, I decided that I’d need to get up on a ladder with something like a 6” Taping Knife and scrape the rest by hand. This wasn’t an insanely difficult task, but there’s a considerable amount of square footage in that drywall tape, and mud is spread across every seam. This literally took me hours and hours to get done; this is one of those cases where the first 90% of progress only represented about 10% of the time. That last 10% easily represented the lion’s share of the work.

There were a couple other difficulties too. For some reason when they sprayed the garage they sprayed the wall above the garage with ceiling texture and they managed to spray the metal garage door brackets as well. I did the bits of wall above the garage door by hand and then decided a cheap wire brush attachment for my drill would be sufficient for getting it off the metal brackets. Fortunately for me the drill and wire brush worked fantastically; unfortunately for me I wound up nicking the drywall on the ceiling in a number of places trying to get it all off. I’ll have to go back and fix those up with some joint compound or something similar and sand it down smooth.

I also tried to scrape down some of that “patch” work I described above and that didn’t go so well. It’s consistency was much harder than the ceiling texture and it doesn’t want to come down at all. I really jackhammered on some of it and I managed to do some damage to the patch, I think. On these bits, I may actually have to do some practice on patching myself and cut out these damaged sections to “re-drywall” and tape them. I’m a little disappointed that I have to do that, but I’m looking forward to being able to practice somewhere since I’ve never had to do that before.

The end result of this phase of the project was as follows:

I’d definitely love to get rid of the popcorn texture throughout the house, but if we decide to go that route I think that’s probably justification to hire a professional. The garage is just big enough for me to understand what it would take to do all 2000-something square feet of our little house. I can’t even begin to imagine the mess that would make and how much work it would take. It is possible that someday I’ll tackle this myself, but I would not count on it.

Here’s a few pictures of my progress and me at the end of one phase of the scraping. I swear I’m not wearing lipstick, I blame Michael Jordan for teaching my entire generation to stick out your tongue all the time when working hard. Each time I concentrate, I caught myself sticking out my tongue and licking my lips; popcorn ceiling texture and joint compound both taste awful. When I finished the only part of my body not covered in the fine white powder was my lips. My suggestion to other DIYers would be to wear some sort of mask. 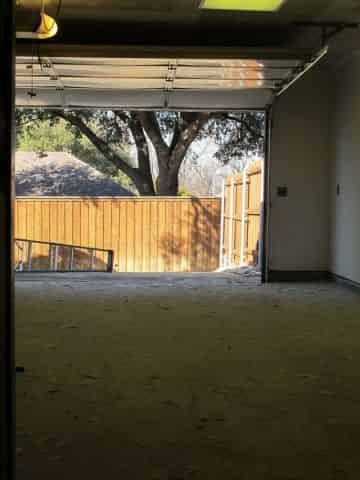 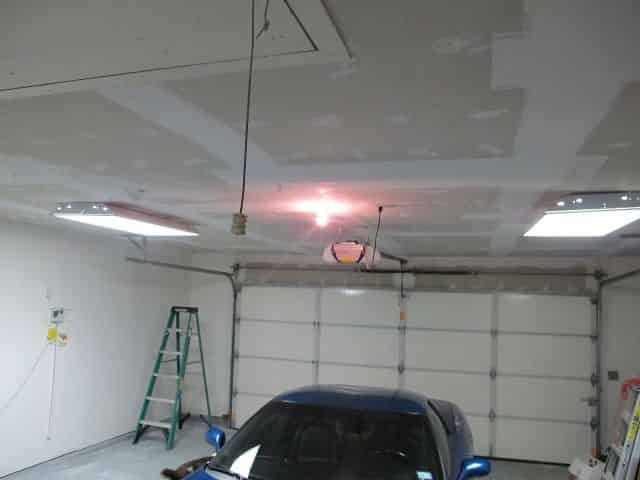 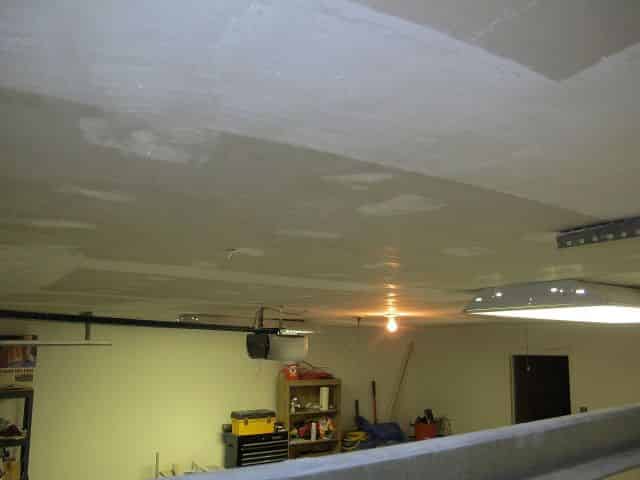 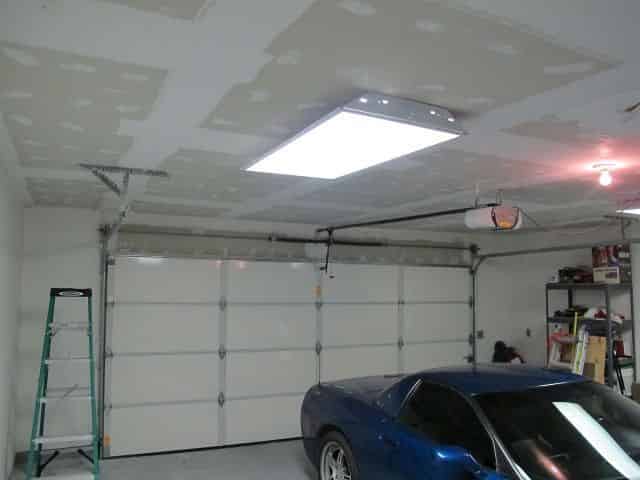 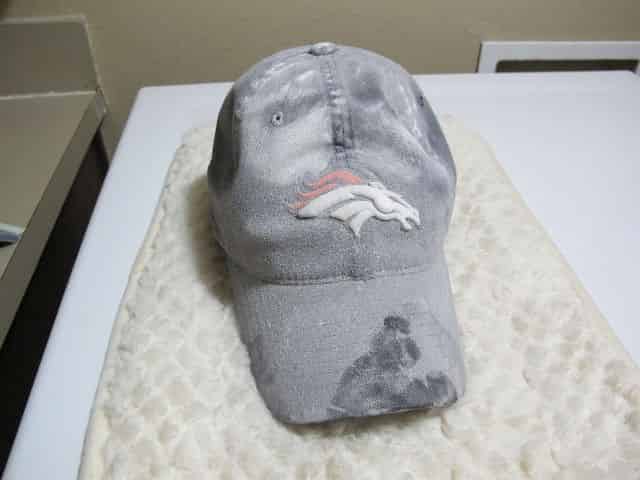 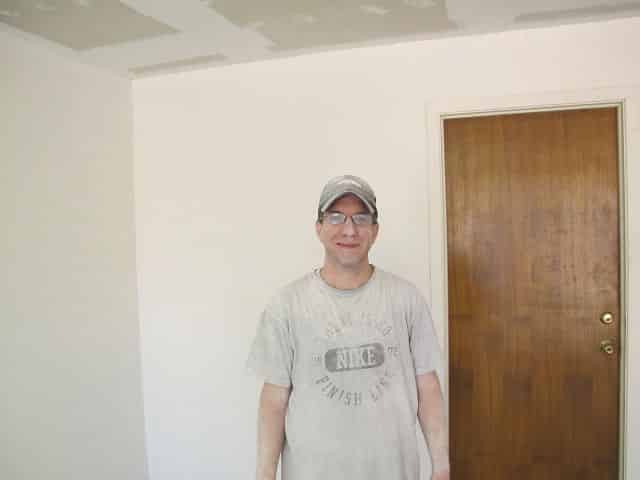 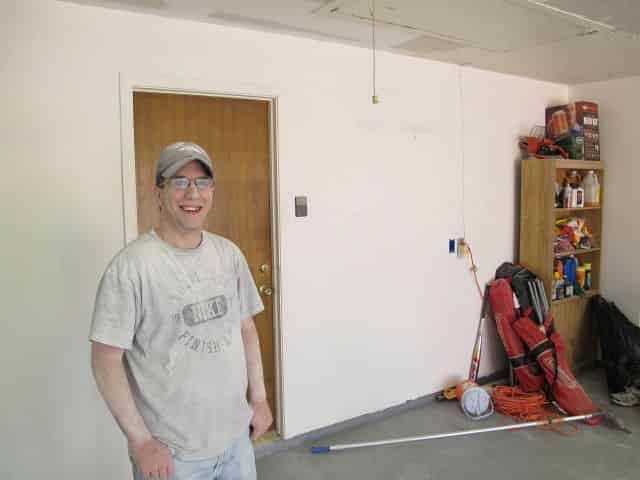 Up next in the garage makeover is going to be brainstorming and researching alternative textures to the popcorn stuff, patching up the drywall on the ceiling and the walls, sanding the paint off the attic door, fixing the patch-job in the ceiling and then re-texturing the ceiling and painting the walls of the garage. I’m looking forward to the next steps of my project and sharing about my failures, successes and any loss of limbs to power tools.