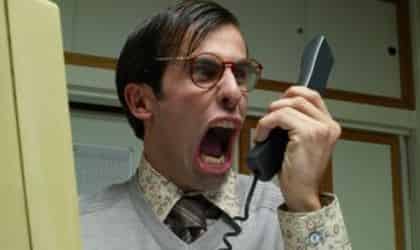 We’ve all had to deal with it: You’re sitting there at home/work/the toilet and your phone rings unexpectedly. If you’re smart, you check the caller ID and you don’t recognize the number. You take a deep breath, answer the phone, and then you hear it—a brief pause as the robo-dialer connects you with a person and the background hum of drones on phones is hummed out into your ear. A tentative “Hello?” crackles through the speaker as someone launches into their phone script.

Very few things aggravate me more than this, E-mail spam is barely tolerable, but phone spam is like declaring war on my peace of mind. Sometimes these phone calls come from places that I do business with, wanting to share updates or alerts with me, and sometimes there are charities calling, soliciting donations in order to further their good works. I don’t exactly care for these kinds of phone calls, but I will tolerate them politely and ask to be removed from their calling list.

In the recent past, my number winds up in the robo-dialer’s database of turds like the ones I dealt with in the middle of February. In the matter of a 2-day time span I had over two-dozen phone calls from the same place at almost all hours of the day (between 8AM and 10PM). Early on, they were calling and asking to speak to someone other than me; the callers all spoke in Indian-accented English and never really broke from script when I explained that the indistinguishable name they were uttering into the phone did not answer this line. In the first five or six phone calls, in tones varying from polite to psychotic I told them repeatedly that they had the wrong number and that I didn’t want them calling back again. I continued to get repeated phone calls throughout the day from these people.

What’s worse is that these people were not above board. They ignored my requests and they were calling to explain that I (or whomever they thought my number belonged to) was pre-approved for a loan of some sorts. If it doesn’t already, this kind of unsolicited notification is textbook phishing. Bait the hook with the $1500 loan offer, get some personal information from the mark and then do God-knows-what to the victim’s credit.

At one point, in frustration I tweeted at T-Mobile. They were polite and helpful, but there’s really not much that they can do. I supplied them with the numbers that were showing up on my Caller ID but that’s easily faked, and that was evidenced by the fact that some of the numbers that were showing up on my phone came from area codes that don’t exist. The construction of our phone systems is explotiable and it certainly seemed that these miscreants were doing exactly that. Having been down this road with T-Mobile in the past, about all they could offer to help me with was to change my phone number, which to me is like plowing down the entire forest so that we won’t have to put out any forest fires. It’s their best solution, but they really need to come up with a better one.

Instead, I decided to handle the situation differently in a two-pronged approach: 1. I would get my hands on an Android App to help deal with the spam. 2. To seek revenge, I would punish the telemarketers by spending as much time as humanly possible on the phone.

Firstly, I had read an interesting article on an app named Sanity in a blog article on Lifehacker. The long and the short of it, you could use the app to handle incoming phone calls and texts in different manners. In my particular case, I created a special contact in my phone and associated every one of the phone numbers from the spammers with that contact. Then I configured Sanity to handle incoming calls from that contact by answering the phone on mute and then turning off the cellular antenna effectively dropping the call without allowing it to get to either my voicemail or me.

Secondly, I wanted to prepare myself for the eventuality that their unrelenting phone calls would slip by Sanity. I wanted to have fun by putting on the show for my would-be scammer and turn the tables on them a bit. Thankfully, I got my chance late on Friday after an especially frustrating week at work—just what the doctor ordered! Originally, I had intended to record this phone call (the app, Sanity, can do that too) but I failed to get it to record correctly. Unfortunately, this call took place during work hours and I had to do my best to keep it work-appropriate. Had I been home, this conversation would’ve taken a much different deviant direction.

Scammer: Hello may I speak to name indistinguishable please?

Brian: This is he, how can I help you?

Scammer: Hello, name indistinguishable, my name is Richard and I am pleased to inform you that you have pre-approved for a loan in the amount of $1500.

Richard: Yes! Now in order to get your money I’m going to need to get some information from you.

Brian: Ummm. Hello? Can you hear me?

Richard: Yes, I am here.

Brian: Why are you calling?

Richard: No, I am calling to inform you that you have been pre-approved for a loan in the amount of $1500.

Richard: Excuse me? I am calling to inform you that you have been pre-approved for a loan in the amount of $1500.

Richard: I’m sorry, I don’t understand. I’m calling to inform you that you have been pre-approved for a loan in the amount of $1500.

Brian: $1500 is not a substantial enough amount of money; I need way more than that.

Brian: That’s a step in the right direction, Richard, but I’m going to need twelve million dollars. I won’t accept a penny less.

Richard: Can you hold please?

Supervisor: Hello, I am Richard’s supervisor, you’ve been pre-approved for a $1500 loan.

Supervisor: No, I am Richard’s supervisor.

Brian: Oh my goodness, where did Richard go?

Supervisor: Richard had to go deal with other business.

Brian: I’m a little worried, Richard sounded like he was distracted. Is everything all right with Richard?

Supervisor: Richard is quite fine, you’ve been pre-approved for a $1500 loan.

Supervisor: Tell me what?

Supervisor: But you’ve only been pre-approved for a $1500 loan.

Brian: I understand, but I need at least 12 million dollars to be interested.

Brian: I understand. I’m not trying to be difficult I can work within your framework.

Supervisor: Good, so you’ll be interested in the $1500 loan?

Brian: Yes, I will need eight thousand of them.

Brian: Eight thousand different $1500 loans. That way I can get 12 million dollars that I need.

Supervisor: Where do want this from?

Brian: What do you mean?

Supervisor: The twelve million dollars, I suppose you want it from my wallet?

Brian: That’s awesome, do you want to send it to me via wire transfer?

Supervisor: Why are you doing this?

Supervisor: (angrily) We don’t waste your time, why do you waste our time? You don’t want to talk to us then just hang up! click 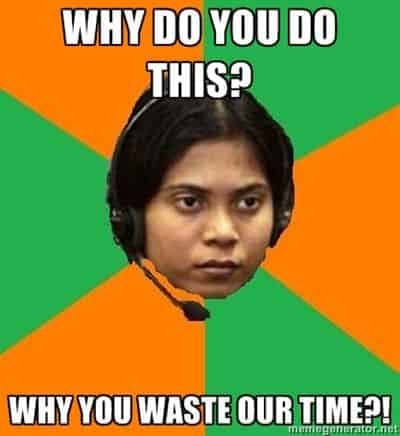 By the time I had finished this phone call, I had inadvertently gotten the attention of all my cubicle-neighbors, most of which were in some sort of giggle fit. Myself, I had almost lost it a couple times; sometimes it’s really hard to be mischievous and keep a straight face. I found it to be insanely ironic that after calling me 20+ times in a two-day span, that Richard’s supervisor was angry at me for wasting their time. Had he actually bothered to stay on the phone instead of having a temper tantrum and hanging up, I would’ve explained to him that this was what I was going to do each and every time that he or one of his employees called me. I would waste as much of their time as I possibly could until they figured out how to get my number omitted from their robo-dialer.

I had absolutely no expectation that anything would change. In fact, I half expected for Richard’s supervisor to call me even more frequently just for pissing him off. But in my total and complete surprise, this was virtually the last phone call of this nature that I had. I wound up taking a couple more calls the next day, but the Sanity app intercepted and hung up on those calls without it interrupting or aggravating me. Maybe it’s just a coincidence that they stopped calling, but I like to think that I made them understand what they were going to have to deal with each and every time they called me and decided it’d be better to not have to deal with my cunning wit and knack for aggravation.

Ultimately, what I decided is that for everyone, time is money. Every minute of the telemarketers’ time I was able to use up, that’s one less potential victim they could be talking to. If everyone took this approach to dealing with telemarketers, then I suspect it wouldn’t be viable to keep making these kind of calls. It’d be awesome if we could change their behavior and drive these kinds of companies out of business.