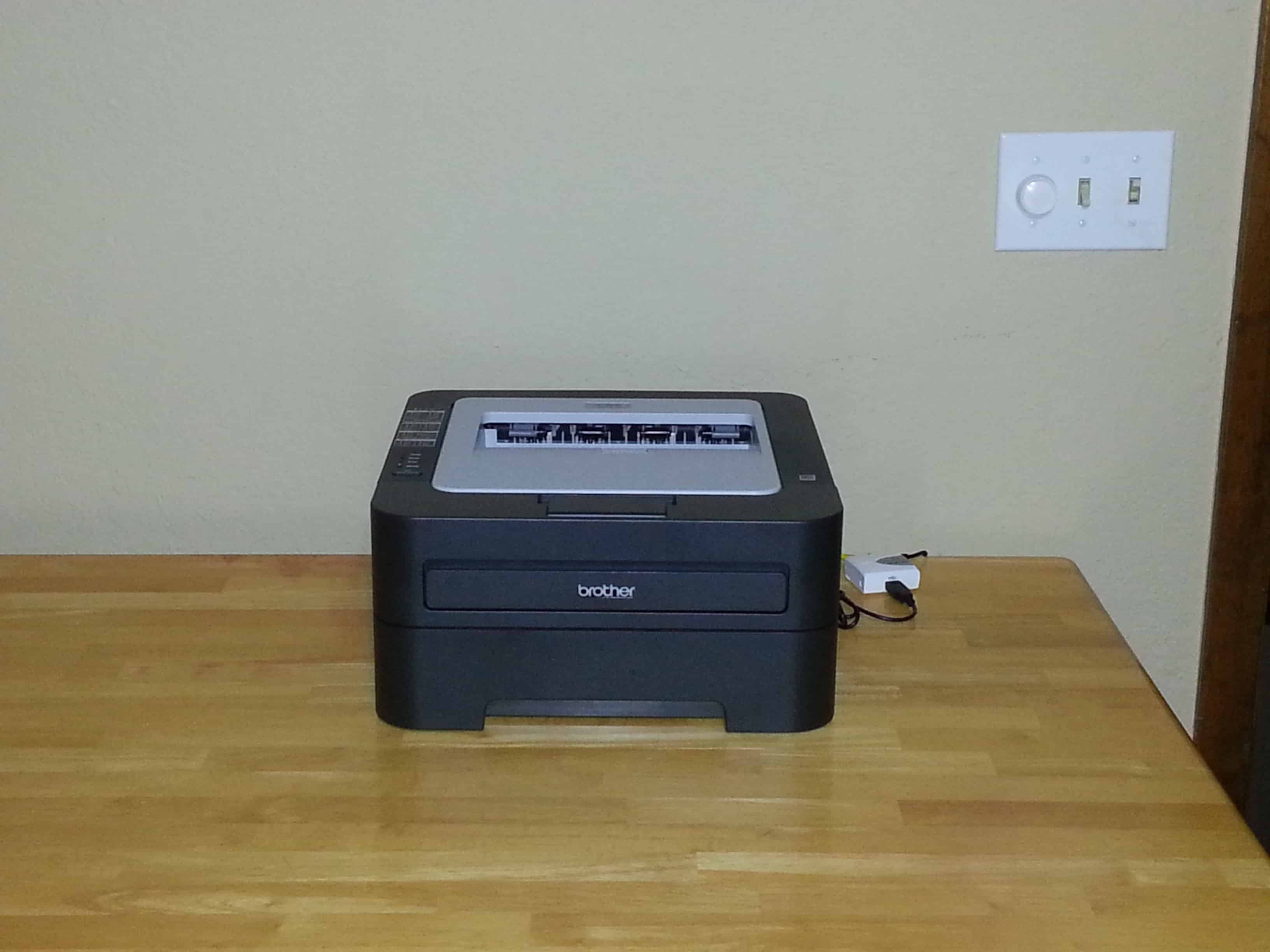 In the beginning of 2012, I completed a DIY project to wire up my house with ethernet cable that gave me grand schemes for the things I wanted to do inside my house with computers; Networked Attached Storage, a multi-media PC, replace the home phone with Asterisk etc… The list is virtually endless. One of the things high up on that list was to put some sort of network printing in there. We hardly ever print documents but when we do it is a minor hassle. The PC that shares the printer is never on or the sharing is being fussy For some time, I have wanted to bypass all that hassle by attaching the printer to the network.

My path to attaching the printer to the network has been blocked for quite a while by my old printer. Like lots of consumers, when I bought this printer I did not really put much thought into what I really needed a printer for. To my chagrin, I wound up picking an inkjet printer with an integrated scanner. I thought I was being wise when I picked a printer that had multiple cartridges (black, yellow, blue, red) because I knew the majority of the printing I would need to do would be in black and white. I wanted something with a separate black cartridge so that I could just keep printing in black & white if the color ran out. Unfortunately for me, the printer that I chose would complain and refuse to print at all if it determined that any of the cartridges was empty or defective. Given the nature of inkjet cartridges drying up, I basically was never really able to print when I wanted to. In the two or so years I have owned this printer, I would be absolutely shocked if I ever got more than 20-30 pages out of a set of cartridges. When you consider that a set of cartridges cost roughly $65 to replace, clearly I had made a poor decision in the purchase of this printer.

A couple weeks ago, I started shopping for a new printer. Because of how rarely we print, price was important. I needed something economical, network capable, reliable and it absolutely could not have ink cartridges. Based on my prior experience I wound up deciding that a laser printer was probably best for us.

Color or Black and White

Ever since the first injket printer, color printers have been readily available with a low up-front cost. But what advantages do you really get of owning a color printer of any sort? Is that set of driving directions from Google Maps really all that more useful in color? Is the recipe you found on the Internet easier to prepare because it is in color? As far as I can think, the answer is “No” except for one regard: the printing of pictures. However, with services like Shutterfly, Snapfish and the digital printing available at your local retailers, you can get a much better quality print at a lower cost than if you did it yourself on your printer.

The second decision I had to contemplate was whether to purchase a printer with integrated network capability or to pick some sort of Print Server. I have been tinkering with and looking at prices of computer components for decades. The last time I looked at a print server they were still pretty expensive so initially my search began with printers that had on-board ethernet. I was surprised at the number printers that had onboard Ethernet but the starting price was a little higher than I had in mind, so I went back and looked at print servers.

Interestingly enough, print servers are cheap compared to what I remember. Starting around $25-$30, you can get a USB 2.0 print server. I dug around both Newegg and Amazon reading scores of reviews on about a half dozen different print servers.

I wound up deciding on getting the TL-PS310U made by TP-Link as my print server (specs) from Amazon for about $36. For my printer, I decided to go with the Brother HL2230(specs) which I found on sale at Newegg for $64. The price and footprint wound up being the deciding factors on my purchase of the printer.

Setting everything up was pretty simple. The print server showed up a day early. Using my OpenWRT router, I assigned a preferred IP for the DHCP to assign to the Printer Server. The printer server came with some management software that I loaded up to make it dummy-proof. Once I had installed the printer server’s software, I was able to hook up the printer and Windows 7 automatically pulled down drivers. The only wrinkle that I ran into is that the print server had a “disconnect from Printer if idle for 30 seconds” option that made installing the printer’s drivers difficult. I had to disable that option in order to get the drivers installed. The print server also hosts a small Web UI that you can hit in a browser. 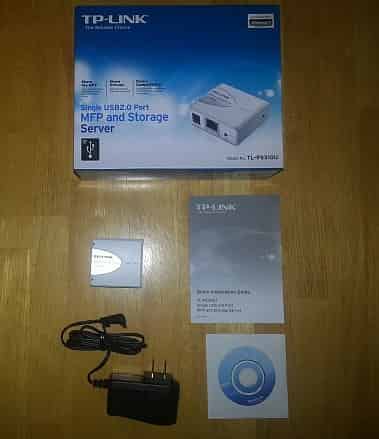 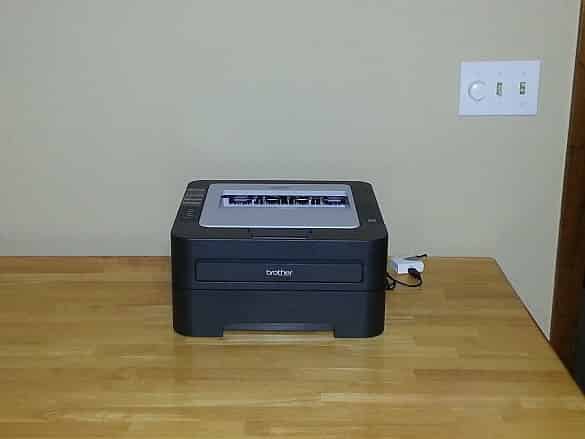 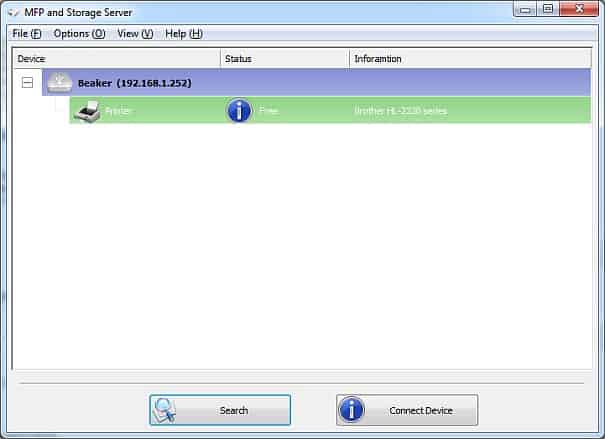 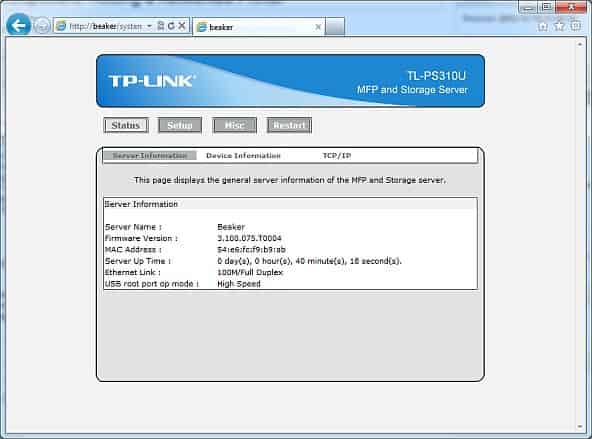 These regrets are pretty minor but I thought I’d point them out for anyone who was interested. The web interface on the TL-PS310U print server was terribly slow, it seemed to be lacking some of the features available in the management software and it does not load up correctly in Chrome which caused me to have open it up in a different browser. In my case my alternate browser is Internet Explorer and I die a little bit on the inside each time I have to open Internet Explorer. My other “complaint” isn’t really directed at anything in general except for maybe the electrical system in my house. Every time the printer warms up, I get an almost imperceptible flicker in the lights and both of the computers in the den receive and display complaints from their UPSes about the power blip. Laser printers have always drawn a ton of power when they first come online; I shouldn’t have been so surprised about the drop in power across the circuit in my den.

Having never really tinkered with or messed with a network-attached printer aside from muttering profanities at the various printers I have had to use at my various jobs, this was relatively painless. Especially when you consider that I went the ultra low-budget route. For roughly $100, I wound up getting a printer and hooking it up to my network without any issues so far on any of the PCs in our house. I am pretty confident that the toner in this printer isn’t going to need replacing in a couple of months even if it goes completely neglected. If you’re looking for an easy way to share a USB printer, I recommend this TL-PS310U print server.