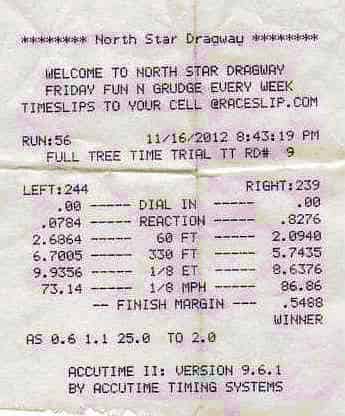 This past weekend, a group of friends and I took our cars out to the North Star Dragway a 1/8th mile drag strip in Denton for one of the Fun ‘N Grudge nights with the purpose of doing a few races with our daily drivers. Since it was November and this was the last event on their schedule for the year, we anticipated that this week would be pretty busy with all sorts of cars. However, the weather (quite cold for most Texans) was down in the 40-degree range, which kept a bunch of people at home.

Back when I owned a turbocharged all-wheel-drive car, this type of night was fantastic to be out driving because everything runs much better when the air is cool and dense. Now with a naturally aspirated motor with tires that have been through God-only-knows how many heat and cool cycles, the weather was not looking to be my ally.

Not that I would let weather be an excuse for any of my times; I already knew I was not going to perform up to the pedigree of my Z06. In the six months that I have owned the car I have pretty much babied it; up until that night I hadn’t even attempted any kind of launch-off of a simulated starting line. And as very few people know, there is a big difference between reading about it on the Internet and actually doing it.

Altogether, that night; I personally made five runs down the track and my friend, “The Greatness,” made two while I gave him a chance to put his money where his big mouth is after mocking me for being so tremendously slow. Good news was, my friend was just a little bit slower than I was.

Man, was I a bundle of nervous energy. I had a Mothra-sized butterfly running around in my stomach as I tried to recall exactly how the drag tree worked and when I should hit the gas. As evidenced by my reaction time, I hit very, very late; so late, in fact, that I almost wound up racing the cars behind me in line. To make matters worse, my prior experience with high-revolution little rotary motors or four-bangers led me to bouncing off the Z06’s rev limiter not one or two times, but THREE times. Every single shift was way too late; perhaps I should invest in some sort of shift light.

Bound and determined, I made another pass 30 minutes later. This time, convincing myself that I was going to launch so early that I was sure to fault, I managed to cut down on my reaction time by a tiny fraction (18%). Ultimately, I did not have much to complain about for this pass—not because it was so good, but because it was not nearly as bad as the others. This pass wound up being my best of the night.

After the second pass, I immediately lined up for a third. I had taken a pretty good bite out of my first time and I wanted to keep making progress. Again, my reaction time was a little bit better, but not really very good. Additionally, I bogged a bit more on the launch and wound up running just a fraction slower than my prior run.

As I collected my timeslip on the third pass, I had a little bit of difficulty with basic vehicle operation and stalled the car. Seeing how close I was to my prior run, I queued up for another run but made one tragic mistake. Since I had stalled the car out previously, my car reverted back to its “normal” mode with both traction control and active handling enabled. Traction control engaged both off the line and on one or two shifts. Upon seeing the “Traction Control Engaged” message in the car, I let up off the gas and coasted through the end of the race. Upon returning to our pack of friends, Pat pointed out that I was not even going the speed limit on that pass.

A funny thing happened at the end of pass four. As I downshifted and turned off the track, my clutch pedal stuck to the floor. I had joked early on about seeing “Which of us would burn out a clutch first,” and chuckled wryly as I thought karma was playing a joke on me. After stopping in the parking lot and checking clutch fluid, I wanted to close out the night and see if I could improve on my earlier runs at all. I wound up getting a much better reaction time, but a terrible launch. I trapped the second highest speed but paid the price for a poor launch and logged my third best time.

At the very least, I doubled the number of passes I had done previously on a drag strip (only 1-2 runs in my ‘92 Eclipse GSX more than 10 years ago). I definitely went faster in the 1/8th mile than I ever had in my Eclipse. Hopefully when the track opens back up for the 2013 season I will be back out there working on getting my time down into the 8.5s and hopefully lower. 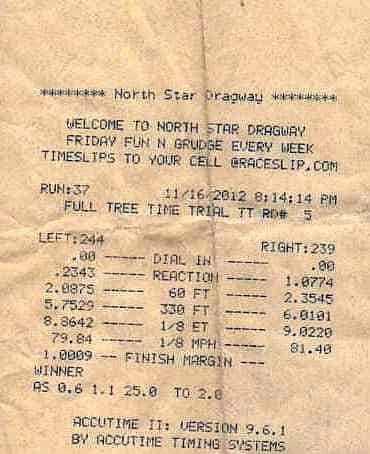 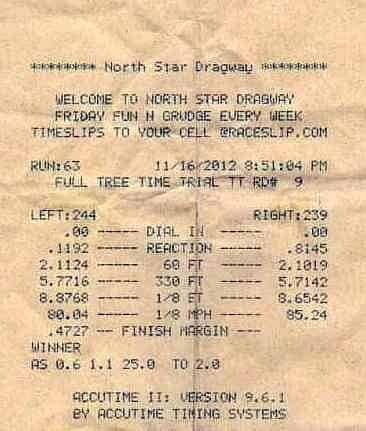 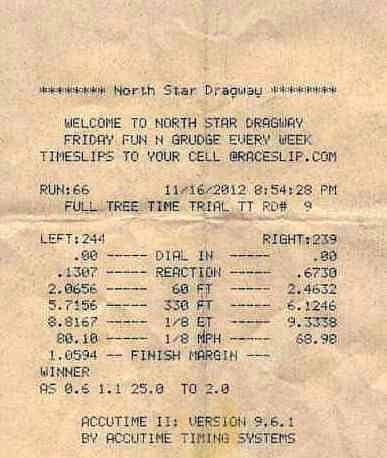