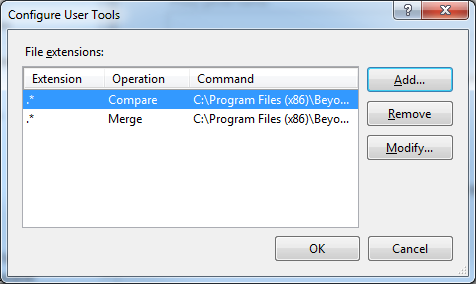 Our group at work is pushing to upgrade from Visual Studio 2010 to Visual Studio 2012 as quickly as possible. Because of that, I have been using VS2012 for a few weeks now trying to get a handle on the new release. After receiving a few different merge requests from the developers, I realized that as part of the upgrade, VS2012 did not bring in my settings for using Beyond Compare 3 Pro as my comparison tool.

Thankfully, setting it up appears to be virtually identical as to how it was in VS2010. I used this helpful StackOverflow question as a starting off point do the same in Visual Studio 2012.

For the sake of helping out other wayward Googlers, I have grabbed a few screenshots and shared that information on this blog. In addition, I went through a few different comparison and merge scenarios to make sure what was presented to me by BC3 was consistent between VS2010 and VS2012. Everything looks to be in order.

Three Way Merge (BC3 Pro Only):