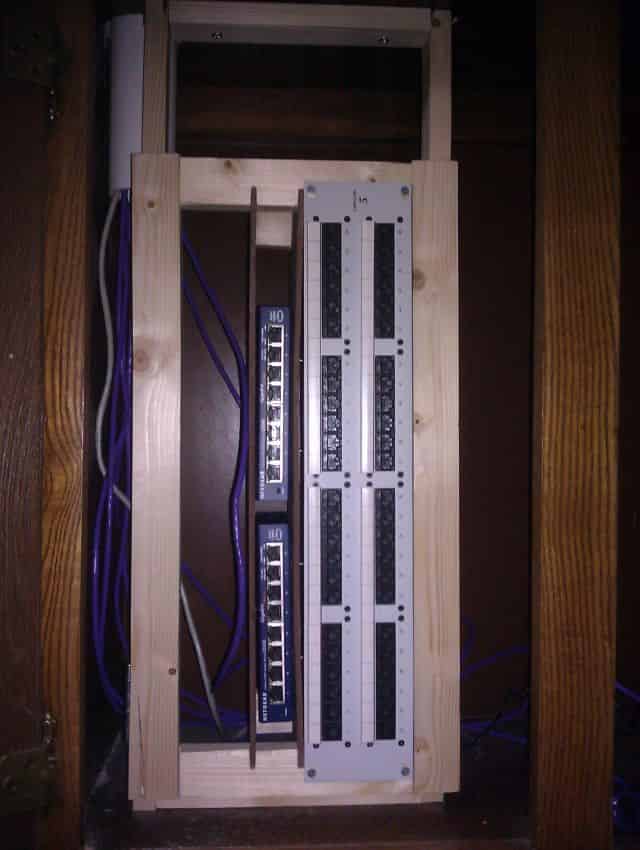 After my last blog entry things seemed pretty bleak. I had a sneaking suspicion that if I had decided to try and push too far that I would wind up putting a sizable Brian-shaped hole in one or more of the bedrooms we were trying to wire up. On the other hand, it felt pretty hollow not being able to wire up a working network jack in each of the house’s three bedrooms. At this point, we felt like we really had two options: buy about 13 feet worth of flexible drill bits and extensions, hire someone to help us, or risk falling through the ceiling. At first, it seemed like the flexible drill bits was the route to go. We made a couple trips to the local big-box hardware stores and got a little bit of a sticker shock when we priced out the tools needed to drill the hole we were planning. Being a first time home buyer, I have been slowly buying all sorts of tools that I did not own before but I just could not justify spending so much on a tool I would likely never use again.

Thankfully, Mother Nature decided to help nudge me in the right direction in the form of a torrential downpour. A week or so ago, we got roughly 5 inches of rain in roughly 48 hours. That rain crept its way into my house via a leak in the roof (or two). Since then, we have had a revolving door of roofers, masons and handymen in our house looking at the leaks. We had hired a local handyman to repair a cracked 2x4” in the attic which happened to be right next to Mr. Impassible HVAC unit. In conversation, I had explained to him about the project and about how I had not had the gumption to try and work my way over. The sprightly man some 15-20 years my senior quite literally hopped, skipped and jumped over to the wall we wanted to run our cables down into. With his assistance, we ran two cables down in no time at all. Not only did he do this in about one fifth the time it would have taken the two of us, but his total bill (including other items around the house) was less than just buying the flexible drill bits we had been considering the week prior. If it had not been such a huge relief to have these cables run and to do it in a somewhat of an affordable fashion, I would have been knocked down a peg or two that this sprightly gray-haired gentleman had so easily completed something that I could not. There is something to be said about how invaluable experience truly is when accomplishing tasks like these.

That weekend, we also ran the cable for behind the TV, the entire purpose of this project from day one. Having a network jack behind the TV would enable me to move the wireless access point to the center of the rooms that would need it the most. This last network jack was completed with the first “oops” of the entire project. Our living room is paneled with wood, and the paneling is nailed down onto regular drywall. We started off trying to saw the hole for the electrical box with the drywall saw, but sawing through the paneling was quite a bit of work, and someone who shall remain nameless most vigorously pushed the drywall saw straight through both what we were cutting and then also the drywall behind it. As far as accidents go, it was not a bad one. Nothing a touch of glue or Spackle couldn’t fix. Having finally completed this network drop, I immediately moved our wireless access point to just behind the TV. I will blog about this in more detail, but I am quite happy to report that the WiFi coverage problems we were having on the east side of the house have been solved.

The weekend of the Superbowl, we decided to finish the remaining bits of work to relocate the Verizon FiOS modem, neaten up the cupboard and clean up all the messes we made along the way.

Ever since the Verizon technician had installed the FiOS, I had been unhappy with the installation. Mostly because they drilled into the house on the east side, pushed their cables (network & coax) through then fed that cable through the attic and drilled out the west side of the attic, routed the cable down the exterior wall of the house and then drilled back into the room we used for our office. It’s a messy installation, and involved drilling 3 holes in the outside of the house. When we started planning My Network Cupboard, I thought it would be icing on the cake to fix this convoluted installation. We unhooked the modem, disassembled the network jack that Verizon had installed and pulled the cable on the western side of our house back into the attic.

What we did next was a little fancy, but we had plenty of open space on the patch panel to use it. The modem had both a coaxial cable and an Ethernet cable plugged into it. We fished both those cables down into the cupboard. We mounted the modem onto the pegboard next to the routers and hooked up the coaxial cable to the modem. The ethernet cable we punched down to an empty port on the patch panel, and then punched down 5 additional ports for the ports on the modem (1xWAN, 4xSwitched). I do not have any immediate plans for the three unused switch ports, but it’s nice to have them wired into the network cupboard in case they’re needed.

We created some patch cords and patched the Verizon FiOS back into the rest of the network that had been completed already. We tested some throughput on various devices and made sure that the FiOS TV was fully functional. For all intents and purposes we had completed wiring the network.

We spent the next couple hours doing wrap up tasks. I had bought a gigantic spool of velcro, which we cut into thin strips and used to do some cable management in the cupboard. We also hooked up the second magnetic clasp on the cupboard due to the fact that just one magnetic clasp was not enough to hold the cupboard shut all the time. We fed all the remaining slack back up into the attic and up in the attic we used more velcro to manage the loose cable and hold it in place. I gathered up my trusty planks that I had spent so much time on and redistributed the insulation.

I took some pictures and even a short video, but I am saving that for my last blog about the project where I’ll talk about the cost (both time and money), lessons learned and advice I would like to pass along to others thinking about a similar project at their own homes.