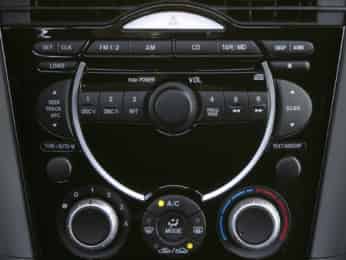 Ever since buying my first Android phone, I have been tinkering with different ways to listen to music in my car. The problem is, they have never been very convenient and the audio quality has been bad. I drive a 2004 Mazda RX-8 and it does not have any kind of mini-stereo input. For awhile, I used an FM Modulator. It was powered using the cigarette lighter and you tuned the radio to an FM frequency that the modulator broadcast on. The modulator has a mini-stereo in so I’d run a headphone cable from my phone and into the modulator then plug the phone into a phone charger which was plugged in to a cigarette outlet in the center console. The net result of this was a mess of wires that ran all over and around the stick shift of the car. I am not much of an audiophile but the quality of the audio broadcast over the FM frequency was awful. And worst of all, it was difficult and inconvenient to get to the phone to control the audio.

For awhile, I was considering changing out the head unit in my RX-8. I could pick something with some sort of audio-in that could be neatly and easily plugged into my phone without much fuss. The problem with this plan, is that my car has some audio controls on the steering wheel and to my knowledge they would stop working if I changed out the stock head unit. Plus, because of the plastic molding in the RX-8 changing the head unit is not exactly a simple task.

On the Internet, I had read an interesting article on a CD player “hack” to wire in a mini-stereo in. From what I understand you could tap into the wiring from the CD player, place a “blank” audio CD into the CD player and then hook up your player. This is a very creative and inexpensive solution, but I did not think it’d meet all my criteria.

What I really wanted was a way to listen to music off my phone while in my car and have the ability to control the phone via the controls on the steering wheel or at least via the head unit. In doing my research I discovered that the best way to do this was going to be using AVRCP and A2DP over Bluetooth. Unfortunately, in 2004 when my RX-8 was made Bluetooth was not a common feature in cars and even today the Bluetooth you find in cars does not include A2DP, it mostly focuses on enabling users to place and receive phone calls. 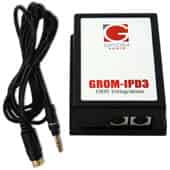 What I needed to do was to add Bluetooth to my car that somehow interfaced with the stock head unit and supported Bluetooth and included A2DP. Most of my research seemed to suggest that putting a new head unit into the car was the typical way to add Bluetooth into cars. However, due to some reading I did on the RX-8 Club Forums, I found that someone manufactures a device that would meet my needs. The folks at GROM Audio have a device called the GROM-AUX which has an optional Bluetooth adapter that plugs into it.

Normally in blogs, I want to talk about how I managed to install the subject of my blog. However I can very fondly remember spending a brisk Colorado fall evening bent in half trying to swap out the head unit on a friend’s car roughly 20 years ago. We made something we thought would be simple into something insanely difficult and frustrating. Ever since then, I have usually relied on professionals or bribed friends into installing my car audio components. This time, my car needed to go into the mechanic for regularly scheduled maintenance. I asked them if and how much they would charge to install the GROM-AUX and the Bluetooth accessory and found that their price was well worth the savings of time and frustration.

My phone quickly paired up with the GROM device, although it was a bit of an adventure. The garage pulled my car up and left it running while I paid the cashier. Which meant by the time I was driving out, the time in which the GROM-AUX was discoverable had elapsed. In order to pair up, I was going to need to turn the car off, set the ignition to “On”, then “Off” and then “On” again, then I was going to have to scan for nearby Bluetooth devices. Unfortunately, this is not as easy to do as it sounds when you are fighting your way home through rush hour. I am pretty sure I paired up with someone else’s Bluetooth head set on my phone and at one point I held up traffic while I was cycling the car’s power. Wisely, I concluded that it was probably best to try and pair up from the safety of my own garage.

Once the phone was paired up, we had a little bit of fun. Firing up different music apps on the phone, primarily Google Music. The AVRCP allows you to advance the tracks inside most of the Android apps that I took a look at. The GROM-AUX is smart enough to mute the audio and switch when a phone call comes in to your paired phone.

Using my favorite Android app, Tasker and a binder-clip phone mount I’ve been able to create a task. When my phone is tilted to the left (as it is in the phone mount) and plugged into power then the phone automatically enables its Bluetooth, pairs up with the GROM device and runs the phone’s Car Dock application.

All things considered, the GROM-AUX (and Bluetooth) accessory was reasonably inexpensive even when you add in the premium for having someone else install it. GROM Audio’s products seem to work with a variety of makes and models, so if your car lacks Bluetooth and you want to do something similar, check out their homepage. As popular as Android (and other devices) are becoming, A2DP and AVRCP are a must have for all road trips.