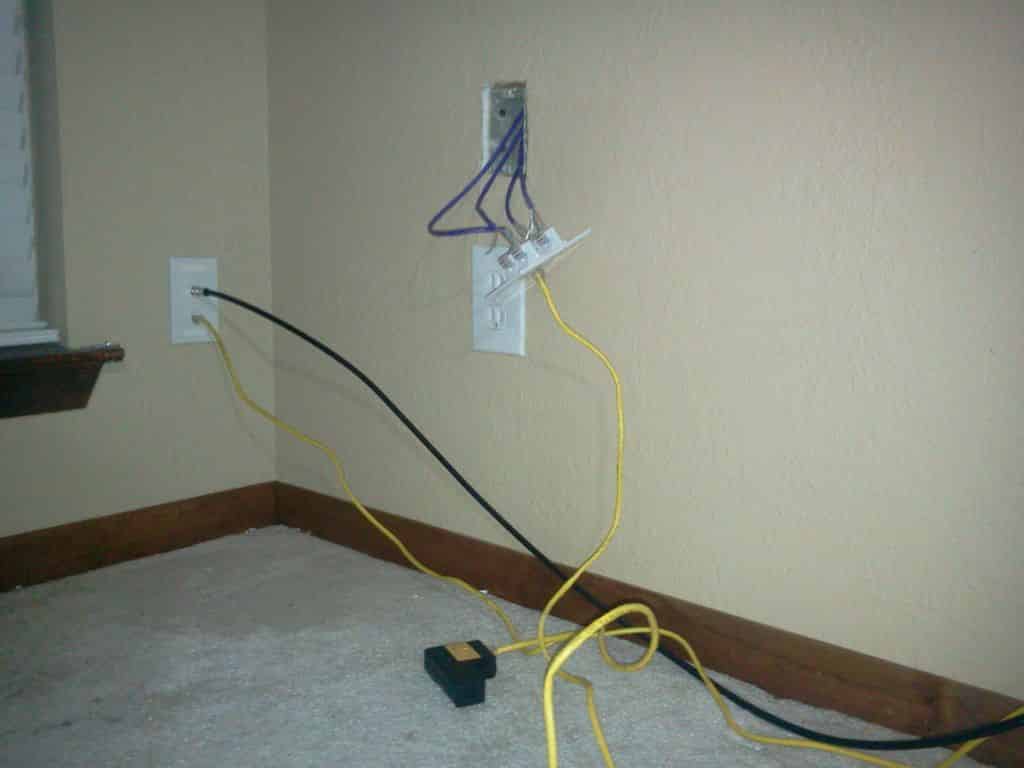 In planning the project, I had two fears related to damaging my house: first, I was convinced that at one point I would come crashing down through the ceiling as I clumsily stepped between rafters, and second, that where I had to cut holes in drywall, the holes I cut would be terribly misshapen and that I’d make a fool out of myself. Seeing as how this is our first house and I generally hate making a fool out of myself because of incompetence these two fears were very present as I went up into the attic again.

The past couple days, we’ve been running the network drops into the den/office of the house. The plan for the den/office is to put network outlets at my PC (4 drops), my wife’s PC (2 drops) and then against another wall (2 drops) for friends to use and for future use. Thankfully, there is a preexisting network drop that goes into the spare bedroom already near one of the computers (mine). Since the network cupboard is on the opposite side of the wall of my PC, I decided to re-use that network drop, and then run my four new cables down. For my PC, I didn’t really have to face either of my two primary fears. It was very straightforward. I drilled a hole (5/8”) in 2x4” at the top of the wall, and then we used a cable fish to push the cable through. Overall, it was pretty easy. Unfortunately, the wall plate I picked was a little narrower than the one that it replaced and the hole is just a little bit too big. There’s a tiny gap (about the width of a dime) between the wall plate and the edge of the hole. Depending on how much it bothers us (not too much so far), I may wind up having to find a way to shim that so it looks nicer.

The next two network plates are where I’d tackle my fears. My wife’s PC needed a new network jack, so I’d be cutting a hole in the wall for sure. The other wall plate was on a different wall, and there were quite a few rafters to navigate in order to reach it. My wife’s network plate wound up being no big deal at all. Her PC is roughly 6-7 feet down the same wall as my PC, and my network plate was right next to a stud. To make things easier, we bought low-voltage gang boxes that don’t necessarily need to be attached to a stud. They have little flappers that pinch the drywall as you tighten it down. We measured over 66” and cut a hole in the drywall. I was super conservative in my cutting, so it took a few adjustments to make the hole fit the gang box well and straight. We ran down two more cables for her PC. And I breathed a sigh of relief.

To navigate the attic, I was being super careful. We’d bought and cut down some 4x8’ sheets of plywood, and I’ve been using those to lay across the rafters to try and minimize any missteps down through the ceiling. For the most part, this has been working well, except you still have to be careful about where you put your feet. As I was using 3 of the sheets of plywood to snake across the attic to the other wall of the den/office, I put my foot (and weight) out on the leading edge of the plywood, which happened to be about 1 foot over the nearest rafter. The plywood see-sawed out from underneath me pretty good, nearly causing me to lose my balance, but I gracefully flopped around like a fish out of water and was able to inch back to solid footing before I put a hole in the ceiling. With that crisis averted, I set to running the cables for the last outlet in the den/office. There’s an ancient old coax hookup on the wall we wanted to use. That coax isn’t currently hooked up to anything and we don’t have any plans of putting a TV in the den/office, so we decided to just pull the orphaned coax up out of the wall and run down the strands of cat5e to replace it. Other than having a hard time getting to the existing coax run due to some HVAC ducting, this went pretty smoothly. 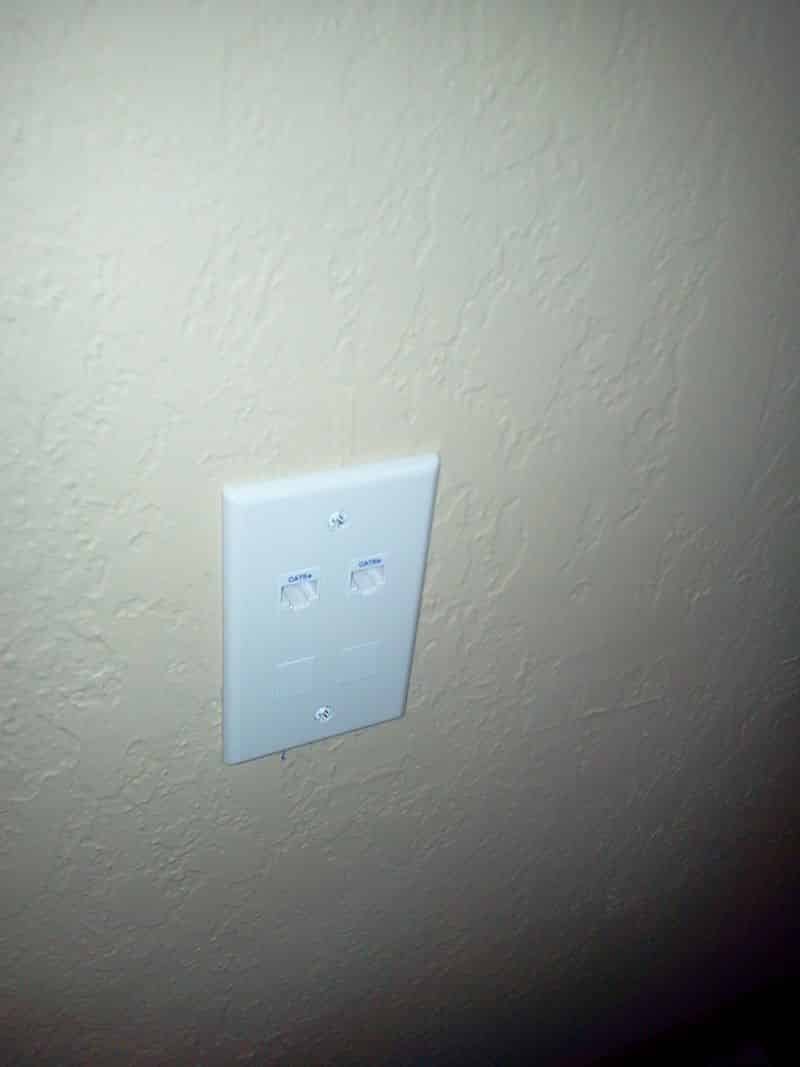 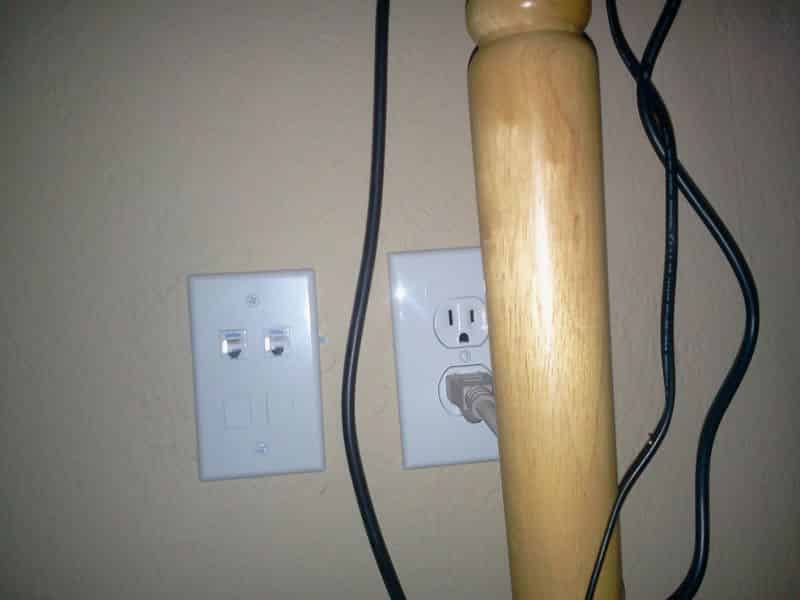 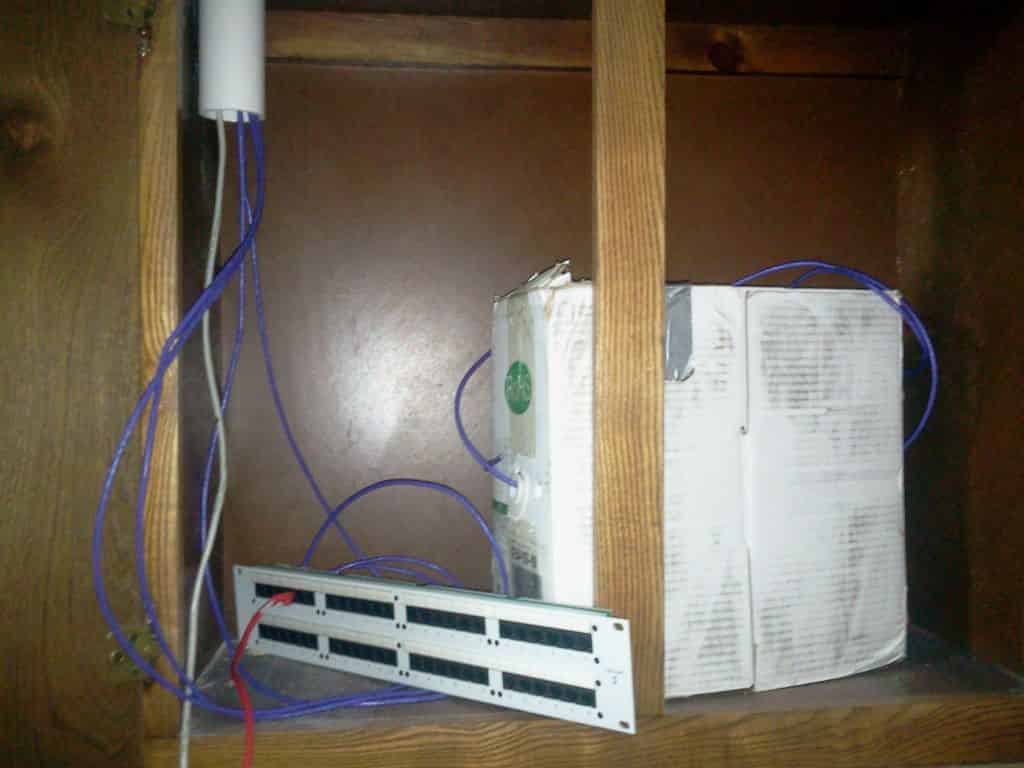 Originally, I had an inkling of a desire to go ahead and run coax in certain rooms and tie it all into the coax that the FiOS guys set up for my TV room and master bedroom. In a perfect world, I’d love to be able to have all of my rooms wired up for coax without having to call out (and pay) to have an installer wire up another room. Each of the network plates I’ve bought has 4 ports, and every wall plate we install, except one, will have at least one or two empty ports if we ever decide to do this.

Having the den/office finished means that we’ve pretty much completed more than half of the network drops needed. We have four rooms remaining (TV/Living room, 2x Spare Bedrooms and the Master Bedroom) to run cables to, but that’ll probably happen later on after Christmas.

Up next, we’re going to finish out the network cupboard’s “rack”. We’ve got a good idea how we want it to look, but have only begun working on the construction.